xxxxxIn the year 1678 an English priest named Titus Oates (1649-1705) hatched up the Popish Plot, claiming that there was a plan to murder the king and replace him with his Roman Catholic brother James, Duke of York. As a result, over the next three years 35 Catholics were executed on the flimsiest of “evidence”, and new harsh laws were brought in against Roman Catholics. The diarist Samuel Pepys was amongst those who were implicated, and he spent some years in prison. In 1784 Oates’s story was disproved. He was imprisoned under James II, but with the return of a Protestant king in 1688, he was pardoned and granted a pension! But the Popish Plot, false though it was, had serious repercussions. In 1679 an attempt was made to exclude the Catholic Duke of York from the throne - replacing him by the Duke of Monmouth - and, as we shall see, there was a conspiracy against the king and his brother, known as the Rye House Plot in 1683. 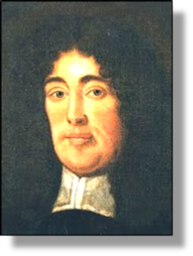 xxxxxThe English priest Titus Oates (1649-1705) was born in Oakham, Rutland, the son of a Baptist preacher. He was expelled from the Merchant Taylors School, London, in 1665, and after being ordained in the Church of England, went to Hastings as a curate. Within a short while he was in trouble again, this time imprisoned on a charge of perjury. He managed to escape and join the navy as a chaplain, but was soon dismissed for misconduct.

xxxxxItxwas at this juncture that he met up with a fanatical anti-Catholic named Israel Tonge (1621-1680). Together they planned to take advantage of the strong anti-Catholic feeling then prevailing throughout the country. Oates became a Roman Catholic in March 1677 and, acting as a so-called spy, attended Jesuit colleges in Spain and France. On returning to England the following year (1678), he alleged that he had uncovered “a damnable and hellish Popish Plot” aimed at “the assassinating and murdering of the 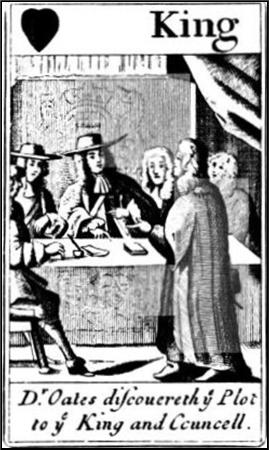 King”, and his replacement by his Roman Catholic brother, James, Duke of York. On his evidence and that of his followers, about 35 Roman Catholics were executed over the next three years, and harsh laws were revised against the Catholic faith. Among those accused of being implicated in the plot was the diarist Samuel Pepys, then working as secretary to the Navy. He was imprisoned in the Tower of London and was not released until 1684. 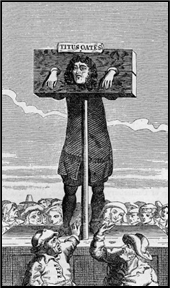 xxxxxMeanwhile, Oates was handsomely rewarded for saving the country, being granted a large pension and an apartment in Whitehall Palace. In 1684, however, doubts surfaced about the validity of his story and, with the accession of James II the following year, he was found guilty of perjury, flogged, spent time in a pillory, and was then imprisoned for life. But, come the Glorious Revolution of 1688, he was pardoned by the new Protestant king, William III, and again granted a pension!

xxxxxButxthe Popish Plot - fabricated though it proved to be - had important political repercussions. Amid the widespread panic (indeed, terror) that it caused, the Earl of Shaftsbury, the leader of the anti-Catholic Whigs, seized the opportunity to introduce his Exclusion Bill 1679. This aimed to exclude the Catholic James, Duke of York, from the succession in favour of Charles' illegitimate son, the Duke of Monmouth. This move created a real danger of civil conflict, and resulted in the king dissolving Parliament in 1681 and taking over the reins of government himself. Shaftsbury was acquitted of a trumped-up charge of treason and took refuge in the Netherlands. Then, as we shall see, the Whigs became involved in a conspiracy against Charles and his brother, known as the Rye House Plot of 1683. The plot failed and its leaders were executed. Monmouth was pardoned for his part in the revolt, but banned from court. He too sought refuge in the Netherlands but, as we shall see, he was destined to return.

xxxxxIncidentally, the searching of the vaults before the opening of each new session of parliament was instituted after this so-called Popish Plot, not after the Gunpowder Plot of 1605 - as is generally thought.