xxxxxThe German philosopher Friedrich Nietzsche rejected the accepted moral values of the day and condemned Christianity as a “slave morality”. He proclaimed that “God (i.e. religion) is dead”, and that people were therefore free to create their own set of values. This being so, each individual possessed the driving force, the will for power, to become a “superman” (Ubermensch), able to impose his or her will on the weak and worthless for the good of the unfortunate. His major works, influenced in some respects by the writings of the German philosopher Arthur Schopenhauer, included Thus Spake Zarathustra of 1885, Beyond Good and Evil, and On the Genealogy of Morals. His works found little favour until the last years of his life - when he was mentally deranged -, and in the 1920s and 1930s his ideas were manipulated to give support to the Nazi movement, a totalitarian organisation led by Adolf Hitler. In fact, he was not anti-Semitic, and he did not support the idea of a master race. Indeed, it was for these very reasons that he ended his friendship with the German composer Richard Wagner. Together with the German philosopher Soren Kierkegaard, Nietzsche was the precursor of existentialism, the belief that each individual should be free to determine his or her own development. 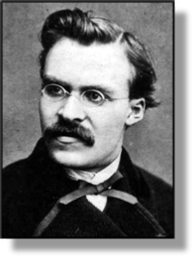 xxxxxThe German philosopher and classical philologist Friedrich Nietzsche became one of the most controversial and influential thinkers of the latter part of the 19th century. A confirmed atheist and a strong believer in human individualism, he discarded the foundations of Christianity and traditional morality in favour of “life affirmation”, the idea that humans should make the most of their life on earth, unimpeded by vague thoughts of a world beyond. His works had an impact over a wide field of human endeavour, including, art, literature and politics, and, together with the German philosopher Soren Kierkegaard, he became the precursor of existentialism, the belief that every individual should be free to determine his or her own development.

xxxxxNietzsche was born in the small village of Rocken, near Leipzig in Saxony. His father, a Lutheran minister, died when he was five, and the family then moved to nearby Naumburg, where he lived with his mother, grandmother, two aunts and his younger sister. During his teens he attended a Protestant boarding school not far from the town, and in 1864 entered the University of Bonn to study theology and classical philology. However, having by then studied Darwin’s theory of evolution and come to question the existence of a God, he soon abandoned theology as a subject, and concentrated upon the interpretation of classical and biblical texts. At that time he was much influenced by the writings of the philosopher Arthur Schopenhauer and the music of the composer Richard Wagner. 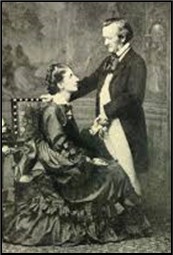 xxxxxIn 1867 he carried out his national military service, serving in an equestrian field artillery unit at Naumburg, and then entered the University of Leipzig to continue his studies in classical philology. It was here that he met Richard Wagner and formed a close friendship with the composer which lasted for some ten years. In 1869, on the strength of some philological articles, published earlier, he was offered the chair of classical philology at Basel University, Switzerland, and before taking up the appointment at the age of 24, was awarded a doctorate in the subject by Leipzig university. His ten-year stay at Basel was not a particularly happy one. He continued his close friendship with Wagner and his wife Cosima (illustrated), (then living at Tribschen near Lucerne), but, taciturn by nature, he quarrelled with various members of the staff, found the teaching tedious and demanding, and suffered almost constantly from eye strain and painful headaches. He had been plagued with migraine attacks from an early age, and these had become more frequent and more severe over the years. And his health had been seriously affected in 1870 - soon after going to Berne - when he had enlisted in the Franco-Prussian War and, during the siege of Metz, had suffered badly from diphtheria and dysentery.

xxxxxPerhaps not surprisingly, in 1879 he resigned his post at the university. For the next ten years he led a wandering existence, together with a hectic life-style, staying just a few months at a time in various cities throughout Germany, Switzerland, France and Italy. It was during this period, as we shall see, that he wrote extensively and produced some of his finest works. In 1889, however, while living in Turin, he suffered a mental breakdown from which he never recovered. He spent a few months in a sanatorium in Jena, and was then nursed at home by his mother at Naumburg and, following his mother’s death, by his sister Elizabeth at Weimar. He became progressively more deranged in his last years and died in August 1900. 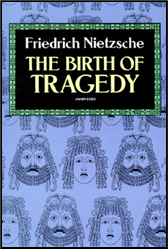 xxxxxWorthy of note among his early writings is The Birth of Tragedy, published in 1872 while working at Berne. In this he lamented the fact that the creative-intuitive energy and wild, amoral behaviour associated with the time of the ancient Greeks - broadly characterised by the irrational, passionate Dionysus of Greek mythology - had been subsequently weakened and then submerged by the rational, self-controlled Apollo, the God of logical order and uprightness. One needed to return to the joy of existence and the primordial creativity to be found in the German music of his time, that of Bach, Beethoven and Wagner. And in his work Unfashionable Observations, completed in 1876 he returned to this theme, seeing the philosophy of Schopenhauer and the music of Richard Wagner as the springboard for a more powerful, more vibrant German culture. Later, in his writings of the late 1870s and early 1880s, notably a three-part collection of maxims entitled Human, All Too Human, and Daybreak: Reflections on Moral Prejudices, he first touched upon his concept of “the will to power” - manifested in man’s overpowering ambition - condemned Christianity as a force wishing to destroy and intoxicate, and applauded the “free spirit”, the one who works for the betterment of society. And noteworthy, too, is his The Gay Science, a work in which he introduces his idea of eternal recurrence, a constant return of all events which he finds “horrifying and paralyzing”, but the acceptance of which would mark the ultimate affirmation of life. 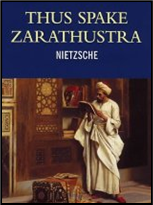 xxxxxHis major works, quasi philosophical and strongly anti-religious, were written during his wanderings across Europe in the 1880s. These included Thus Spoke Zarathrustra, completed in 1885 and seen by some as his most significant work, Beyond Good and Evil, and On the Genealogy of Morals. In these he developed further in particular his idea of “the will to power”, a concept in which he saw the essential requirement of men and women as being the ability to control and use to their advantage the external forces operating upon them. The individual had to be the master of his or her own passions, and of his or her own destiny, and, this being so, there was no place for Christianity, - a “slave morality” as he called it - which only served to subdue the will and divert attention to a vague, fictional world beyond the grave. Once it was accepted that “God (i.e. religion) is dead”, then human creativity could fully develop in the living world. And this “will to power” - a driving force of energy - would achieve not only power over others but also power over oneself. One had to strive for ever to reach one’s full creative potential. It was this freedom to follow

one’s natural inclinations, this “affirmation of life”, that produced the rare, superior individual, the superman or “overman” (Ubermensch). This was an heroic human being of virtue who, prepared to live dangerously, would impose his will - psychical not physical - on the weak and worthless (the “weak herd”) in order to “help the unfortunate”. In this respect he selects certain individuals who might be seen as coming close to this concept of the “overman”. His models included the philosopher Socrates, the prophet Jesus, the artists Leonardo da Vinci and Michelangelo, the writers Shakespeare and Goethe, and the fighting men of destiny Julius Caesar and Napoleon. 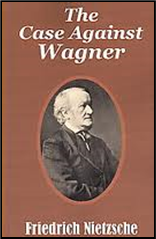 xxxxxImportant among his last works, written in 1888, are The Case of Wagner and Ecce Homo. The first is a powerful criticism of his former friend. Having heaped praise upon him in his earlier works - notably in the Birth of Tragedy - he then took him to task for his anti-Semitism and his involvement in the volkish movement, an organisation believing in the superiority of the Germanic race. He now regarded his music as sick and decadent, though he does accept that, at its best, it is a profound expression of loneliness and suffering. The second is a work of self examination in which he attempts to interpret his own feelings as a philosopher and a human being. 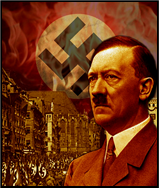 xxxxxIt was only towards the end of his career when, in fact, he was suffering from dementia, that his work began to be recognised. Unfortunately, in the 1920s and 1930s his philosophy was hijacked by the Nazi movement in Germany. The concept of a superman or “lord of the earth”, who imposed his will upon the weak and the worthless was particularly attractive to Herr Hitler, the leader of the Nazi party. His interpretation of Nietzsche’s philosophy was due in large part to the philosopher’s sister Elizabeth. A firm believer in the Nazi ideals, and married to an ardent anti-Semitic, after her brother’s death she edited and censored his writings in the process of establishing the Nietzsche Archive in 1894. Then in 1901 she published The Will to Power, a collection of doctored notes which supported in detail the declared aims of Nazi ideology.

xxxxxBut this said, it is known that Hitler visited the Nietzsche Archives on a number of occasions, and it is likely that he was familiar with one or more of the philosopher’s books. Indeed, in his political manifesto Mein Kampf, published in 1928, Hitler uses words and sentences very similar to those written in works such as Thus Spoke Zarathrustra and Beyond Good and Evil. Nietzsche was not anti-Semitic, nor was he a believer in some sort of master race - he fell out with Wagner for these very reasons - but his language was often violent and excessive, and his arguments often lacked clear-cut conclusions. As a result his meaning could be open to a number of interpretations. Hitler saw what he wanted to see. After the Second World War, however, there was a more favourable reassessment of the man and his philosophy. 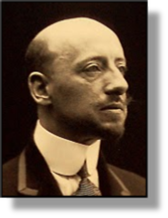 xxxxxIncidentally, among those influenced by the works of Nietzsche - as interpreted by the Nazi movement - was the Italian poet, novelist and dramatist Gabriele D’Annunzio (1863-1938). He later became a leading exponent of Fascism, the totalitarian regime led by the Italian dictator Benito Mussolini in the 1930s. After writing collections of sensuous poems and short stories (influenced by the French writers Flaubert and Maupassant), he produced a number of decadent novels in the 1890s, some of which featured a self-centred hero in the likeness of a superman. His major works were The Child of Pleasure, The Intruder, The Triumph of Death, and The Flame of Life. Among the plays he produced were the tragedies The Dead City and Francesca da Rimini. ……

xxxxx…… The term Superman was popularized in the play Man and Superman, written by the Irish playwright George Bernard Shaw in 1903. A light comedy of errors, its plot puts forward the idea that in matters of love it is the women who force men to marry them, not the other way round.