xxxxxThe Scottish mathematician John Napier invented the first system of logarithms, expounded in 1614 in his A Description of the Marvellous Canon of Logarithms. He also produced a mechanical device for calculating multiplication and division. This early slide rule, described in his Rabdolgiae of 1617, was named “”Napier’s bones” because of its appearance. Other inventions included a hydraulic screw, and advances in weapons and farming equipment. He was the first to use the decimal point, and at one time worked with the English mathematician Henry Briggs. A devout Protestant, he strongly denounced “Papists, Atheists and Newtrals”. 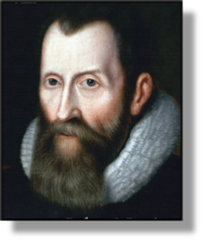 xxxxxThe Scottish mathematician John Napier was born in Merchiston Castle, near Edinburgh, and studied at St. Andrews University. After travelling in Europe, he returned to Scotland in about 1571 to manage his estate. He stayed there for the rest of his life.

xxxxxAs a mathematician, he is best remembered today for inventing the first system of logarithms, but he also produced one of the earliest mechanical devices for calculating multiplication and division, the forerunner, in fact, of the slide rule. This method, described in his Rabdolgiae of 1617, used numbered rods and came to be known as "Napier's bones" because the rods themselves, often made of ivory, gave that appearance (illustrated below). It was Napier, too, who first used the decimal point to express decimal fractions. And apart from these innovations in mathematics, he invented a hydraulic screw as a means of removing water from flooded coal pits, together with various instruments of war, and he made a number of advances in scientific farming, among which was the practice of using salt as a fertilizer. 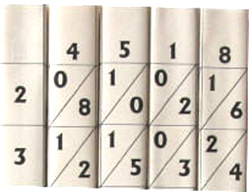 xxxxxNapier probably began working on logarithms as early as 1594, but it was not until 1614 that he published his A Description of the Marvellous Canon of Logarithms, a treatise in which he introduced and explained the functions of logarithms and produced the first set of tables. He saw this work as a means of improving the accuracy of calculations made by astronomers. This early concept of logarithms was further advanced two years later when he met up with and worked alongside the English mathematician Henry Briggs.

xxxxxSurprisingly enough, however, mathematics was only a hobby to Napier! As a devout and passionate Protestant his real interest lay in the religious controversies of his day. In 1593 he published a powerful denunciation of the Roman Catholic Church in his A Plaine Discovery of the Whole Revelation of St. John, a work which provided the first important Scottish interpretation of the Bible. The dedication in this book was in the form of a letter to his king, then James VI, imploring him to purge his family and his court of all who might be "Papists, Atheists and Newtrals". And, as a member of the general assembly of the Scottish Church, he begged the king to deal with the Roman Catholics so that "justice be done against the enemies of God's Church".

xxxxxThe English mathematician Henry Briggs (1561-1630) worked for a short time with Napier and much improved his work on logarithms. It was probably he who had the idea of producing a table of logarithms with 10 for their base. These tables were first published in his Logarithmorum Chilias Prima in 1617, and then given to 14 significant figures in his Arithmetica Logarithmica seven years later. He was appointed professor of geometry at Oxford University in 1619.

xxxxxAs noted, Napier's work on logarithms was much improved by his short but fruitful collaboration with his fellow mathematician Henry Briggs (1561-1630). In 1616 Briggs traveled to Edinburgh to meet Napier and from then on they worked together to simplify his original logarithms. Indeed, it is almost certain that it was Briggs who had the idea of producing a table of logarithms with 10 for their base. Such tables were first published by him in his Logarithmorum Chilias Prima of 1617, and seven years later he produced Arithmetica Logarithmica, a work in which the tables were given to 14 significant figures. These works, together with his Trigonometria Britannica, published in London in 1633, did much to ensure the widespread acceptance of logarithms throughout Europe.

xxxxxIncidentally, the logarithms devised by Napier and improved by Briggs were logarithms of sines for use in astronomy and navigation. It is for that reason that Briggs’ logarithms were over 100 times larger than those in modern tables.