xxxxxThe German astronomer and mathematician Regiomontanus contributed greatly to the revival and development of astronomy during the Renaissance period. In 1474 he produced his almanac Ephemerides, setting out the daily positions of the heavenly bodies over the next 30 years. Then, following the publication of his Tabulae Directionum, he journeyed to Rome to assist in the redrafting of the Julian calendar. He is also remembered for the advances he made in trigonometry, contained in his treatise Five Books on Triangles of All Kinds. With the aid of his patron, he was able to print and publish his own works. 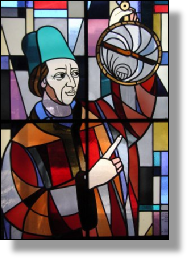 astronomer and mathematician was born Johannes Müller, but later became known as Regiomontanus, based on the Latinized version of his home town of Königsberg. He showed early promise. He entered the University of Leipzig at the age of eleven and four years later was appointed to the Faculty of Astronomy in Vienna, where he was a student and then a colleague of Georg von Peurbach (1423-1461), the Austrian mathematician and astronomer. He lived in Italy during the 1460s, and spent three years at the court of the king of Hungary - mainly collating Greek manuscripts - before settling down at Nurnberg in 1471. His lifelong study of astronomy contributed greatly to the revival of this science in the Renaissance period.

xxxxxIn 1467 he began compiling trigonometric and astronomical tables, and then in 1474 he produced his Ephemerides, a work which, for the first time, gave the daily positions of the heavenly bodies over a period of years. In his case the years covered were from 1475 to 1506. This almanac set out the method - not very practicable - for determining longitude based on lunar distances. In 1475 he published his Tabulae Directionum and journeyed to Rome at the invitation of the Pope to assist in the redrafting of the Julian calendar, then seriously in need of revision. In addition, he translated Ptolemy's Almagest from Greek into Latin, completing work started by Peurbach. 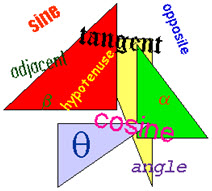 xxxxxRegiomontanus is also remembered for his revival of trigonometry and the advances he made in this subject. In 1464 he published his influential treatise Five Books on Triangles of All Kinds, together with tables of sines and tangents. In this and in many of his works he was considerably helped by having his own means of printing. His patron at Nurnberg, one Bernhard Walther, had provided him with a house containing a printing press (as well as an observatory!), and he was thus able to print and publish his own works.

xxxxxIncidentally, after Regiomontanus’s death, an intriguing sentence, in his own handwriting, was found amongst his papers. It read: The motion of the stars must vary a tiny bit on account of the motion of the Earth. This has led some people to believe that it was Regiomontanus who gave Copernicus the idea that the Earth moves round the Sun. This is pure conjecture, but we do know that Copernicus studied his works.