xxxxxAs we have seen (1669 C2), Aurangzeb was the last of the great Mughal emperors of India. A fanatical Muslim, under him the empire was at its largest. With his death in 1707, however, the empire began to disintegrate. Following the death of his son Bahadur in 1712, there was a power struggle between his four sons and, for the most part, the empire broke up into a number of petty kingdoms. As we shall see, in 1739 (G2) the Persian king Nadir Shah plundered the city of Delhi, and later much of the empire was taken over by the Marathas or annexed by the British. 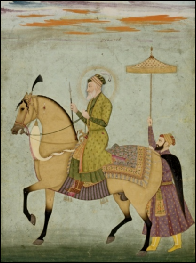 xxxxxAs we have seen (1669 C2), Aurangzeb was the last of the great Mughal emperors of India. A ruthless and fanatical Muslim, he showed no tolerance towards the Hindu or Sikhs, and the opposition this created eventually led to the empire's downfall. Under Aurangzeb the empire was at its largest. He briefly subdued the Deccan and the states of Bijapur and Golconda, but the far south was never really under central control. It was here that he came up against the Marathas, led by their able leader Shivaji. It was they who, by the middle of the 18th century, were to control much of India.

xxxxxWith the death of Aurangzeb in 1707, the great Mughal Empire - founded by Babur in 1526 - began to disintegrate. He was succeeded by one of his sons, 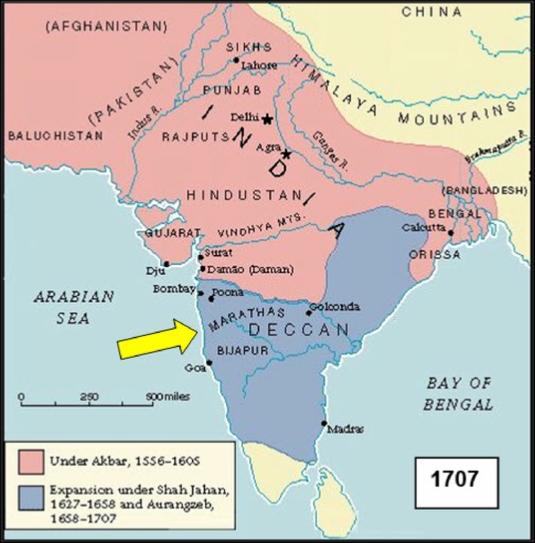 Bahadur, and with his death in 1712 there followed a power struggle between his four sons. Over the next thirty years central authority collapsed, and apart from the emergence of two or three substantial states in the provinces - such as Hydrabad - the empire broke up into a large number of petty kingdoms and principalities, mostly governed by Muslim or Hindu rebels. As we shall see in 1739 (G2) the Persian king Nadir Shah invaded the decaying empire and plundered its capital city of Delhi, carrying off the peacock throne and - if it were there for the taking - the koh-i-noor diamond. After this humiliation, the once great Mughal Empire - especially noted for its artistic achievement and growing commercial development - survived but a short time at the hands of the Marathas and then the British.

THE DEATH OF AURANGZEB AND

DECLINE OF THE MUGHAL EMPIRE  (AN)

An arrow on the map marks the territory of the Marathas at this time, acquired by their leader Shivaji.