xxxxxThe French political philosopher and jurist Charles Montesquieu first gained prominence with his Persian Letters of 1721, a satire which severely criticised French institutions, political, legal, social and religious. The work made him famous, earning him membership of the French Academy, and marking him out as one of the earliest and most influential representatives of the Enlightenment. On returning from a tour of Europe in 1732 - which included 18 months in England - he wrote his Causes of the Greatness and Downfall of the Romans, an apology for a republican form of government, and then spent the next fourteen years preparing his masterpiece, The Spirit of the Laws, published in 1748. Influenced to some extent by the writings of the English philosopher John Locke, this examined the major forms of government and concluded that the different elements which make up a government had to be separated so that each acted as a check upon the others. This separation of power between the legislature, executive and judiciary - based loosely on the British system - was seen as an essential ingredient of a liberal form of government. As such it played an important part in the drafting of the American Constitution, and upon the thoughts of his own countrymen prior to the French Revolution. 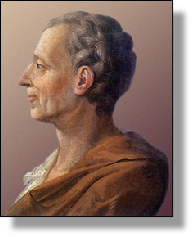 xxxxxThe French political philosopher and jurist Charles Montesquieu was born into a wealthy family, at the Chateau of la Brède, near Bordeaux. He was educated at the Oratorian school at Juilly, near Paris, and then returned to his region to study law at the University of Bordeaux. In 1716, following the death of an uncle, he inherited a large fortune and a title (Baron de Montesquieu), together with the deputy presidency of the Parlement of Bordeaux. He held this office for ten years, during which time he developed an interest in philosophy, the natural sciences, and political history.

xxxxxMontesquieu first gained prominence as a writer with his Persian Letters, published in 1721. This work was made up of a series of letters supposedly written by two Persian aristocrats during a visit to Europe. Their comments provided a convenient and satirical means of criticising the French contemporary scene, its political set-up, legal system, social divisions, and Roman Catholic doctrine. Very little escaped their critical eye. Indeed, what amounted to an undisguised attack upon the absolutism of the Bourbon monarchy was later regarded as the opening "shot" in the events leading up to the French Revolution. The book, voicing the silent views and fears of the many, proved extremely popular, and brought fame for its author. Flushed with success, he moved to Paris in 1726, and was elected to the French Academy two years later. He now took his place as one of the earliest and most influential representatives of the Enlightenment, becoming a frequent contributor to the Encyclopédie - that most powerful of instruments in the struggle for reform. 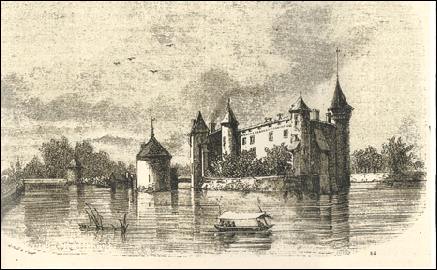 xxxxxIn April 1728 he began a somewhat belated "Grand Tour" of Europe, lasting some four years. He travelled to Austria and Hungary before visiting Italy, Germany and Holland. He finished up in England and, during a stay of 18 months, was presented at court, elected a fellow of the Royal Society, and took a more than casual interest in the British parliamentary system. He then retired to his estate near Bordeaux, the wine-producing property of La Brède (illustrated), and decided to take up a literary career. For the next two years he was mostly occupied with his Reflections on the Causes of the Greatness and the Downfall of the Romans, one of the first works of any importance dealing with the philosophy of history. Published in 1734, it was an immediate success and circulated throughout Europe. Furthermore, it sowed the seeds for a more than worthy successor. Illustrating as it did the inner strength of a republican form of government over a tyrannical system - wherein all the functions of power lay in the hands of one person or body - these Reflections anticipated his brilliant masterpiece, The Spirit of the Laws, produced in 1748 after fourteen years in the making.

xxxxxContained in two volumes of no less than 31 books, and written in a clear, firm style, this impressive undertaking was influenced, in part at least, by the theories of the English philosopher John Locke. It covered in depth the social political and legal influences at work within a state, and it examined in detail the three broad types of government - a republic based on virtue, a monarchy based on honour, and a despotism based on fear. It concluded that in order to ensure the freedom and rights of an individual, the major functions of a government had to be separated so as to provide a system of checks and balances. If governmental power were fragmented, then each individual power base could operate as a check upon the others. Not surprisingly, perhaps, he saw one of these "checks" as a strong aristocracy, able to curtail the power of the monarchy. So he remained, at heart, a conservative, and a man of his times. 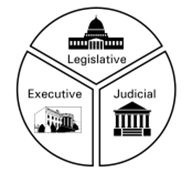 xxxxxThis concept of a separation of power between the legislature (which drew up the laws), the executive (which put the laws into practice), and the judiciary (which resolved disputes in accordance with the laws), was based on the British constitution as Montesquieu saw it during his visit to England - though, in fact, Britain's parliamentary system did not conform strictly to this pattern. It was this doctrine above all, that emerged from his monumental study and was readily accepted as an essential ingredient of a liberal system of government. As such, as we shall see, it was to have a particularly powerful influence upon those who drafted the Constitution of the United States, and upon the thoughts - and, later, actions - of his own countrymen prior to the French Revolution. Herein lay Montesquieu's lasting contribution to the course of history - worldwide.