xxxxxIn 1786 two Frenchman, Michel-Gabriel Paccard (1757-1827) and his porter Jacques Balmat (1762-1834), became the first men to climb Mont Blanc, the highest mountain in Europe. The Genevan geologist Horace Bénédict de Saussure, who awarded them a prize for their achievement, climbed the peak the following year to make a study of the Alps. From then on, mountaineering (Alpinisme) became a popular sport. 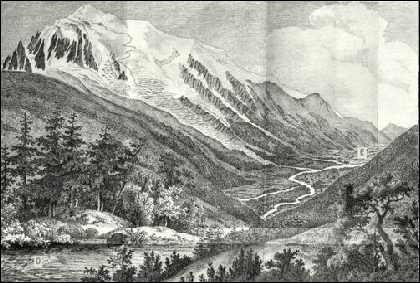 xxxxxIt was not until the latter part of the 18th century that mountains were climbed just because they happened to be there. Prior to this time, mountains were often thought to be the abode of evil spirits, or were climbed solely for purposes of scientific investigation, or the study of certain geographical features, such as glaciers. It was not, in fact, until 1760 that mountaineering became a sport in the modern sense of the word. It was in that year that the Genevan geologist Horace-Bénédict de Saussure (1740-1799) paid his first visit to Chamonix in the French Alps, and was struck by the beauty and the height of Mont Blanc, then reckoned, correctly, as the tallest peak in Europe (15,771 feet). He determined to climb the mountain one day, but at the same time, offered a money prize for the first person to reach the top. 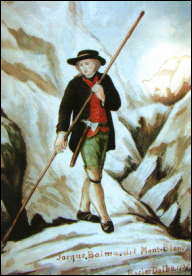 xxxxxThe challenge to climb the highest peak in the Alps was not taken up, however, until 1786, twenty-six years later. It was then that a Chamonix doctor named Michel-Gabriel Paccard (1757-1827), and his porter Jacques Balmat (1762-1834) (illustrated), took on the task of conquering what the local people called “The Accursed Mountain”. By nightfall they had reached a ridge known as the Montagne de la Côte, and then, starting at dawn the following morning, they crossed the Grand Plateau and, struggling against strong winds, reached the summit at eight o’clock in the evening. “We have been,” declared Paccard on his return, “where no living being has ever been before, not even the eagle and the mountain goat.”

xxxxxInspired by this feat, Saussure himself climbed Mont Blanc in August the following year, and took weather observations while at the top. As a physicist at the University of Geneva, Saussure then went on to make a detailed study of the Alps, setting out his findings in his Travels in the Alps, published over the years 1779 to 1786. In the first volume of this work he introduced the word “geology” as a scientific term.

xxxxxIncidentally, when Saussure made his ascent - a climb which had taken Paccard and Balmat about two days - he was accompanied by eighteen guides (including Balmat), and besides food supplies and all the scientific gear, he took along a tent, a folding bed with a mattress, sheets and blankets, eight coats, six shirts, boots, gaiters, three pairs of shoes and a pair of slippers! …… 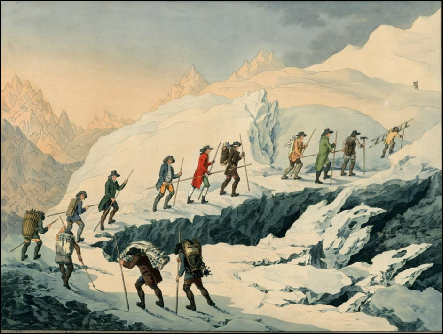 Xxxxx……xxThe climbing of Mont Blanc made alpinisme (mountaineering) a popular sport - for those who could afford it. ……

Mont Blanc: one of the many drawings produced by the French artist Marc Théodore Bourrit (1739-1819), for Travels in the Alps by Horace Bénédict de Saussure, first published in 1779. Balmat: by the French artist Louis Albert Guislain Bacler d’Albe (1761-1824), 1787. Alpinisme: date and artist unknown – British Museum, London.