xxxxxThe French satirical dramatist Molière was one of theatre’s greatest comedy writers. He learnt his trade as an actor, director and comic dramatist during thirteen years on tour in the provinces. He returned to Paris in 1658 and quickly won fame with his The Amorous Doctor and The Affected Ladies, a witty satire on French high society and the pretentious “blue stockings” who gathered at the house of Madame de Rambouillet. His theatre, the Palais Royal, provided entertainment for the king and his court, and later came to be known as the famous Comédie Française. His best and most popular comedy-ballets were produced in the 1660s and 1670s, and included The Misanthrope, The Miser of 1666, The Doctor in Spite of Himself, The Imaginary Invalid, and his The Would-be-Gentleman - many in collaboration with the court composer Jean Baptiste Lully. In these and his other plays, the humour pokes fun at the weakness and stupidity of others, such as the hypocrite, the greedy one, the social climber or the medical “quack”. Some of his works were so scathing that they upset the establishment and, like Tartuffe - which attacked religious hypocrisy - were banned for a number of years. During his thirty non-stop years, Molière transformed comedy into a sophisticated and enduring art form in which the characters were, as he put it, “living types”. 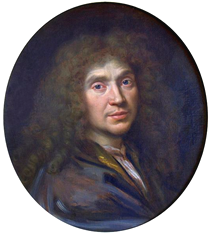 xxxxxThe brilliant French satirical dramatist Jean-Baptiste Molière provided the very basis for French comedy, and came to be regarded as one of theatre's greatest comedy writers. He was born in Paris, the son of a rich upholsterer and tapestry maker, and after being educated at the Jesuit Collège de Clermont, studied law at Orleans University.

xxxxxIt was in 1643, at the age of 21, that he was attracted to the theatre and, as actor-manager, adopted the name Molière. He took part in the founding of the Illustre Théatre, but it proved a failure in Paris, and for the next 13 years he took his troupe on tour in the provinces. Travelling in the south and south-west of France, the company put on performances in all the major towns, including Nantes, Toulouse and Lyon. During these years he greatly improved his skill as an actor and a director. Furthermore, because of the lack of good material, he was soon writing his own plays. At this time they generally followed the Italian-type farce - known as commedia dell'art - with its usual stock characters and situations, but two works of this period, his first play L'Étourdi (The Blunderer) and Le Dépit Amoureux, (The Amorous Quarrel) showed early signs of his own, individual style. 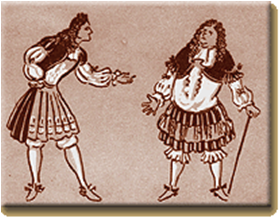 xxxxxIn 1658 he returned to Paris with something of a reputation, and within the year the company was performing his Le Docteur amoureux (The Amorous Doctor) in front of the king. This was well received, but his break through into public favour came with his production of Les Précieuses ridicules (The Affected Ladies) a year later. This satire on French haute-society - as seen in the gatherings of pretentious "blue stockings" at the house of Madame de Rambouillet - proved highly popular because of its pointed but light-hearted ridicule of the upper classes. From then onwards, the company never looked back. It moved to Richelieu's theatre in the Palais Royal, and became the official provider of entertainment to the king and his court. Later, by amalgamating with their rivals, first the Théatre du Marais and then the Hôtel de Bourgogne, it took on the famous name of the Comédie Française. By then (1680) Molière was dead, but such had been his influence that this national theatre became popularly known as the Theatre or House of Molière.

xxxxxQuite apart from his skill as a master of comedy, Molière took the French theatre in a completely new direction, replacing the classical Greek themes - with their stereotype heroes and their somewhat sterile settings - with situations from everyday, contemporary life. His characters were not aloof from their society, but very much part of it, and their variety of shortcomings were readily appreciated by the audience of the day. As he put it, the portraits he painted had to be seen as "living types". Thus the humour was born out of the weaknesses and stupidity of others, and little quarter was given in poking fun at the hypocrite, the greedy one, the social climber, the pretentious, or the medical "quack". Therein lay the essence of his humour: the holding up of a mirror to catch what has been called the "double vision" of society - the right and the wrong, the wise and the foolish. 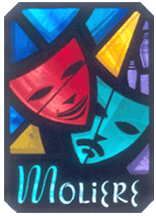 xxxxxAs a result, some of his works came too close to the truth for some people's comfort, and he was obliged to fight hard to keep his company afloat, despite enjoying the king's favour. His L'École des femmes (School for Wives) of 1662 was judged wicked and vulgar for its satirical jabs at society's love of materialism, whilst his Don Juan and Tartuffe went too far in their scathing attack upon religious hypocrisy. Strong objections were made by the French higher clergy, and Louis XIV felt obliged to take action. Don Juan was only performed a few times, and it was not until 1669, five years after its first performance, that Tartuffe was shown in its entirety. Molière replied to such attacks in his one-act discussion plays entitled L'Impromptu de Versailles (The Impromptu of Versailles) and his La Critique de l'École des Femmes (School for Wives Criticised), a work in which he defended his role as a dramatist. And some of his critics, such as playwrights who objected to his dramatic innovations or envied his success, found themselves cast as characters of little consequence in his next production!

xxxxxHis best and most popular satires - about 12 in number - were produced in the 1660s and 1670s and included Le Misanthrope (The Misanthrope), L'Avare (The Miser) of 1666, Le Médecin malgré lui (The Doctor in Spite of Himself), Les Femmes Savantes (The Learned Ladies) and Le Malade Imaginaire (The Imaginary Invalid). His Le Bourgeois Gentilhomme (The Would-Be Gentleman) was one of a series of comedy-ballets produced in collaboration with the king's favourite composer, the French musician Jean Baptiste Lully. Regarded as one of his most amusing plays, it tells of a naive cloth merchant who, aspiring to be received at court, takes lessons in the gentlemanly refinements of music, dancing, fencing and philosophy. In addition to these satires and a variety of operatic comedies specially designed for Versailles - such as Les Fâcheux (The Impertinent Ones) - Molière had to supplement his income by producing the traditional, slap-stick farces enjoyed by the masses. He died exhausted at the age of 51, having served the French theatre for thirty non-stop years, during which time he transformed comedy into a sophisticated and enduring art form.

xxxxxIncidentally, and ironically, it was during the fourth performance of his play Le Malade Imaginaire (The Imaginary Invalid), that he collapsed on stage while playing Argan, the leading role. He died at home that evening and was buried in Saint Joseph's cemetery in Paris four days later. 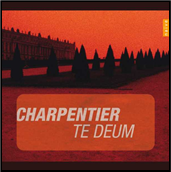 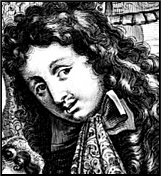 xxxxxAndxworthy of mention here is the French baroque composer Marc-Antoine Charpentier (c1634-1704). He provided some witty and delightful incidental music for a number of Molière’s plays, including The Imaginary Invalid of 1673. However, he spent most of his life composing church music, including hymns, psalm settings, masses, oratorios and motets. After serving seventeen years as house composer for the pious Marie de Lorraine, Duchess de Guise - during which time he produced a considerable amount of vocal works - he became music master for the college of Louis le Grand, then for the church of Sainte-Chapelle, and finally for the Jesuit church of St. Louis. Unlike his rival, the Italian-born French musician Jean-Baptise Lully, he never held an official appointment at court, but he was at one time music teacher to the King’s son, the Dauphin, and this earned him a royal pension in 1683. Notable among his compositions were the setting of his Te Deum in D major, his Mass Assumpta Est Maria, and his musical tragedy Médée of 1693. Towards the end of his life the harmonic and melodic inventions of his music became widely appreciated.