xxxxxParadise Lost, written in 1667 by the English poet John Milton, ranks as one of the finest poems in western literature, whilst his powerful prose was ably used in the defence of human liberties. He began writing poems while at Cambridge, and these included The Passion, On Shakespeare, and the sonnet To the Nightingale. After touring on the continent he returned to England in 1639 and, as a staunch Puritan, wrote a number of prose works in support of the parliamentary cause. His Areopagitica was a powerful plea for the freedom of the press, and in his The Tenure of Kings and Magistrates he defended the execution of Charles I. With the coming of the Restoration he was fined and imprisoned, but by this time he was totally blind and needed help to continue his literary work. It was then that he wrote his masterpiece Paradise Lost, an epic poem in 12 cantos in which he traces in grand style the struggle between good and evil, beginning with the Fall of Man. There followed Paradise Regained - dealing with Christ’s temptation in the wilderness - and Samson Agonistes, a Greek-style tragedy telling the story of the biblical Samson. Milton’s influence on 18th century verse was immense. Some of his poetry is difficult to understand, being steeped in classical allusions, but no poet has written such lofty, majestic and beautiful verse. 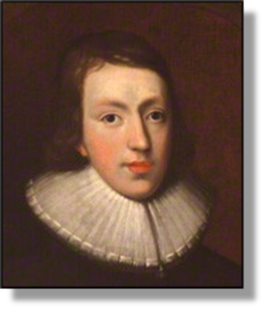 xxxxxTwo early works in particular, the masque Comus, performed at Ludlow Castle in 1637, and the pastoral elegy Lycidas, written in 1638, gave clear proof and promise of the exceptional lyrical talent of the English poet and writer John Milton. His most famous work, the epic Paradise Lost of 1667, now ranks amongst the finest poems of English, indeed Western literature, whilst his prose was put to powerful and telling use in the defence of human liberties.

xxxxxHe was born in Cheapside, London, near the Mermaid Tavern, and after attending St. Paul's School, studied with a "pure mind and behaviour" at Christ's College, Cambridge. It was during his seven-year stay at Cambridge that he wrote a number of poems, including On the Morning of Christ's Nativity, The Passion, On Shakespeare, and two sonnets, To the Nightingale and On Arriving at the Age of Twenty-three. For most of the 1630s he lived in his father's home, first at Hammersmith and then in Horton, near Windsor, reading widely in the Latin and Greek classics, and studying religious and political history. To this period belongs - in addition to Comus and Lycidas - L'Allegro, Il Penseroso, and the miniature masque Arcades.

xxxxxThen after touring France and Italy for two years (1638-1639), he returned to England and, settling in London, was soon embarked, as he himself put it, "on a troubled sea of noises and hoarse disputes". A man of strong religious views and wedded to the Puritan cause, he published a string of prose works on republicanism and church government, supporting the parliamentary cause at every opportunity and lauding the ideals of religious and civil freedom. These pamphlets brought him recognition but, as one can imagine, they were not well received in a number of quarters! On church matters, for example, he opposed episcopacy in his Reformation of Church Discipline in England (1641), and he wrote in part in favour of divorce in his The Doctrine and Discipline of Divorce. His major works on the political front were Areopagitica, a powerful plea for freedom of the press, The Tenure of Kings and Magistrates in defence of the execution of Charles I, and The Ready and Easy Way to Establish a Free Commonwealth, produced on the eve of the Restoration.

xxxxxNor was his contribution confined to the writing of pamphlets. From 1649 he also had a hand in the working of government, serving as Latin Secretary on Cromwell's Council of State. By this time, however, his sight had begun to fail, and come 1652 he was totally blind, obliged to carry out his duties and his literary work with the aid of relatives, friends and a series of paid assistants. With the coming of the Restoration, a disillusioned Milton was fined and imprisoned, his political works being regarded as “treacherous and slanderous”. However, his name was included in the amnesty - due, we are told, to the intercession of his friend Andrew Marvell - and he was released after a short while. 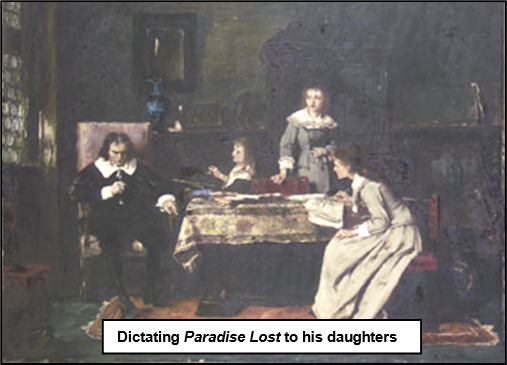 xxxxxDespite its unpromising start, the Restoration marked the beginning of Milton's most productive period. He could now give his time over to his masterpiece Paradise Lost, the great work which had occupied his mind for so long - the all pervading struggle between good and evil. It was begun in 1658, completed in six years, and published in 1667. A monumental epic poem in 12 cantos, it was inspired by the Fall of Man and the battle between God and Satan, as seen in the story of Adam and Eve. As befits the subject, it was an imaginative work, written in a powerful, majestic verse - the "grand style" - and profound in scholarly knowledge. There followed Paradise Regained, taking as its theme Christ's temptation in the wilderness, and Samson Agonistes, a tragedy on the Greek model telling of the story of Samson from his captivity in Gaza. But by this time, 1671, Milton's health was failing. He died in 1674 - the year that the enlarged edition of his Paradise Lost was published - and was buried beside his father in the chancel of St. Giles Church, Cripplegate, London.

xxxxxMilton married three times. His first marriage was not totally successful, but produced three daughters. His second wife died in childbirth within in a short time, but his third wife, his former nurse, survived him and, by all accounts, brought him happiness in his last years. In his private life, it appears, he was a gentle, thoughtful man, but this was in stark contrast to the demands he made upon himself and others in his public role and literary work. His blindness made him bitter at times - we know there was often friction between him and his daughters - but he enjoyed lively conversation and took great pleasure in playing on the organ or viol.

xxxxxAs a poet and writer Milton towered over his contemporaries, and his influence on 18th century verse was immense. It must be said that, for today's reader, some of his poetry is not always easy to 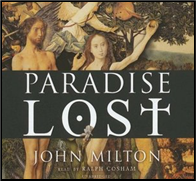 understand, steeped as it is in classical allusions, but no poet has written such lofty, majestic and beautiful verse, nor shown such a technical mastery of the English language. And no writer has fought harder for the rights of the individual.

xxxxxIncidentally, Paradise Lost was completed in a little cottage in the village of Chalfont St. Giles, Buckinghamshire, to where he and his family had moved in 1665 to escape the Great Plague, then raging in London. Today, the cottage is a museum, dedicated to his life and work.

xxxxxThe poet Andrew Marvell (1621-1678) assisted Milton when he worked for the Commonwealth government, and it appears that, at the Restoration, he played a major part in securing his release from prison. He assisted the blind poet in his writing and, like him, was a champion of liberty, producing works in favour of toleration, and attacking the corruption within the government of Charles II. As a poet he was a member of the metaphysical school, some of his work dealing with the inner depths of human feeling, but he also wrote some charming love lyrics, and his series of pastorals testify to his love of nature. He was a great admirer of Oliver Cromwell, writing an ode in his honour when he returned from Ireland, and praising his accomplishments in his On the Death of Oliver Cromwell in 1659. The 19th century writer Charles Lamb was a great admirer of his work. 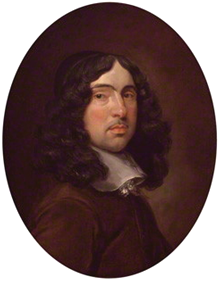 xxxxxAndrew Marvell (1621-1678) was born in Winestead, Yorkshire, and attended Hull Grammar School before going up to Trinity College, Cambridge. The civil war broke out soon afterwards, and by the time the Commonwealth had been established he was a committed Parliamentarian. He was tutor to Mary, the daughter of Lord Fairfax, for two years, working at the general's estate at Nun Appleton, and then tutor to Cromwell's ward, William Dutton. It was after this that he was appointed assistant Latin secretary to the Council of State, working directly under John Milton. In 1659 he became member of parliament for Hull - an office he held until his death - and the following year he reconciled himself to the return of the monarchy. It appears that at the Restoration he played a major part in securing Milton’s release from prison, and he is known to have spent time helping the blind poet in his writing. Like him, he remained an outspoken champion of liberty, and towards the end of his life wrote The Rehearsal Transposed, in favour of toleration, and An Account of the Growth of Popery and Arbitrary Government, a scathing attack upon Charles II's reign to-date. 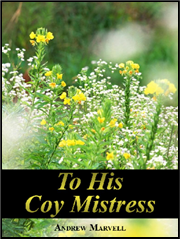 xxxxxAs a poet he belongs in part to the metaphysical school, some of his work dealing with the inner depths of human feeling. It was while working at Nun Appleton that he wrote a number of well-known lyrics, such as To His Coy Mistress, The Garden, Upon Appleton House and The Definition of Love. He greatly admired Oliver Cromwell, and he frequently praised him in verse, notably in his Horatian Ode upon Cromwell's Return from Ireland, in 1650, and On the Death of Oliver Cromwell in 1659. By contrast, in works like Last Instructions to a Painter and Britannia and Raleigh he launched bitter attacks upon the corruption within the government of Charles II. Some of his earlier poems, such as Tom May's Death and The Character of Holland, were satirical in vein, but his later works included some charming love lyrics, and his series of pastorals on English gardens testified to his great love of nature and the outdoor life. The 19th century English writer Charles Lamb was a great admirer of his work.