xxxxxJohn Stuart Mill, son of the philosopher James Mill, was the most influential philosopher and economist of his day. Like his father, he was a strong believer in Utilitarianism (the idea that governments should legislate to provide the greatest happiness for the greatest number), but he modified this theory, arguing that pleasure had to be valued by quality as well as quantity, and asserting that, morally speaking, “actions were right in proportion as they promote happiness, wrong as they produce the reverse”. In his On Liberty, published in 1859, he championed individual liberty against state interference, defending freedom of thought and discussion. And this belief in freedom was to be seen in his Principles of Political Economy, an earlier work in which he came out in favour of free enterprise and laissez-faire in the market place. He also wrote influential works on logic and ethics, and contributed articles on a wide range of subjects to newspapers and journals. He served as a member of parliament towards the end of his career, and is remembered above all for his campaign to win women the right to vote. He was one of the founders of the first women’s suffrage society, and his The Subjection of Women of 1869 was a powerful plea for female emancipation. He spent his last years near Avignon in southern France. 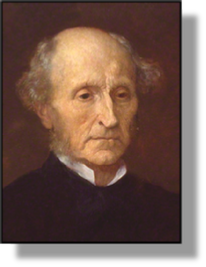 xxxxxThe English theorist and intellectual John Stuart Mill was the most influential philosopher and economist of his day, remembered above all for his revision of Utilitarianism, and his defence of individual liberty. He also made important contributions in political science, ethics and logic, and later, as a member of parliament, he supported radical reforms such as compulsory education, birth control and equality for women.

xxxxxHe was born in London, the son of the philosopher James Mill, and proved something of a child genius. After a comprehensive and rigorous education conducted by his father, he began work in the East India Company in 1822, employed as his father’s clerk in the examiner’s office of the India House. He remained with the company until 1858, retiring as chief of the examiner’s office - like his father before him. He became a member of parliament in the late 1860s, and it was then that he gave support to a number of controversial reform measures. 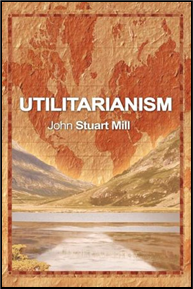 xxxxxIt was as a child that, under his father’s firm and constant guidance, Mill became, like him, a firm believer in Utilitarianism. Put forward by the English philosopher Jeremy Bentham towards the end of the 18th century, this theory held that in order to maximize pleasure and minimize pain, all legislation should aim to provide “the greatest happiness for the greatest number”. Around the age of 20, however, Mill suffered a nervous breakdown, being troubled among other things by the weaknesses he discerned in the Benthamite philosophy. As a result, in his Utilitarianism of 1863 he modified this somewhat vague, crude theory, arguing that, based on human experience, pleasure had to be valued by quality as well as quantity. Furthermore, he insisted that some pleasures, and particularly those of the mind, could be valued more highly than others, and that account needed to be taken of this fact. Finally, he introduced a more human, moral aspect into the theory, maintaining that a distinction had to be made between right and wrong. “Actions were right in proportion as they promote happiness, wrong as they produce the reverse.” 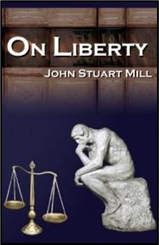 xxxxxIn his earlier work On Liberty, published in 1859, Mill championed the defence of individual liberty against any interference from the state and what he called “the tyranny of the majority”. The only duty of the state as he saw it was to provide a climate of order and security in which the individual, given complete freedom of thought and discussion, could be allowed to develop his own individuality. And in his Considerations on Representative Government, produced two years later, he strongly supported the principle of representative democracy, opposed legislation based on sectional interest, and urged that minority opinion be given adequate safeguards. However, liberal though his ideas were, he harboured doubts as to where progressive moves towards democratic government might eventually lead. He was uneasy about extensions in the franchise, for example, doubting the value of public opinion in a competitive society, and remaining in favour of an intellectual free-thinking elite which was capable of measured opinion and advanced ideas. 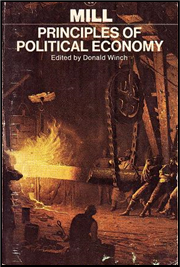 xxxxxHis unswerving support for freedom was also to be seen in his writings on economics. In his Principles of Political Economy of 1848, a work which had a marked influence on economic thought throughout the remainder of the century, he put forward the arguments for and against government intervention in a country’s economic affairs, and then came down strongly in favour of free competition and laissez-faire, the hallmarks of the classical view advanced earlier by Adam Smith, David Ricardo and his own father. This belief in the need for unregulated activity in the field of economics gained a great deal of popular support following the publication of his treatise - due in no small part to his lucid exposition of the subject - though in fact, laissez-faire was to prove too simplistic and limited a doctrine to remain fully viable as world trade became progressively more complex. Earlier, in his Essays on Some Unsettled Questions of Political Economy, published in 1844, he had attempted to solve a number of complex problems in the field of practical economics, such as the relationship between wages and profits, and how production is influenced by consumption.

xxxxxAmong his other works were his two-volume System of Logic, published in 1843, a systematic work which made out a powerful case for the empiricist theory (the idea that all knowledge is gained from experience), August Comte and Positivism of 1865, Essays on Bentham and Coleridge, and his Autobiography, published after his death in 1874. Throughout his career Mill also contributed numerous articles to a variety of newspapers and journals, and these included The Morning Chronicle, the Westminster Review, The Examiner, Tait’s Magazine, The Jurist and the Edinburgh Review. Many of these articles were on predictable subjects, such as the importance of freedom of speech, but he also wrote on poetry, history and botany, subjects which were of special interest to him.

xxxxxAfter retiring from his post in the East India Company, Mill became a member of parliament in 1865, and took an active part in both foreign and home affairs. He supported the North in the American Civil War - dedicated as he was to the abolition of slavery - and he saw Britain’s overseas role as giving support to freedom movements worldwide. In domestic matters he put his weight behind the Reform Act of 1867, and in this connection he is remembered above all for his campaign to win women the right to vote. He was one of the founders of the first women’s suffrage society, and in 1869 he published his The Subjection of Women, a powerful plea for female emancipation. After losing his seat in 1868 he spent most of his time at a villa near Avignon in southern France, writing on a variety of subjects. He died there in May 1873.

xxxxxIncidentally, there can be few children, if any, who have had such an extensive education as Mill. Trained exclusively by his father, he had mastered Greek by the age of seven, started courses in Latin, geometry and algebra the following year, and was being taught logic and economics at the age of 12. By the age of 17 he had gained a thorough knowledge of philosophy, psychology, law, chemistry and botany. It is perhaps little wonder that he suffered a nervous breakdown at the age of 20! ……

xxxxx……  Mill met Harriet Taylor, a married woman with children, in 1830. They became close friends - nothing more it would seem - and they married in 1851 following the death of her husband. She exerted some influence on his later work, particularly when he was writing his essay on The Enfranchisement of Women.