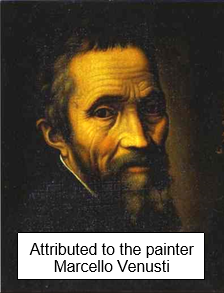 was born in the small village of Caprese, near Arezzo, but his family moved to Florence soon after his birth and it is here that, as a Florentine, he produced some of his finest work. He was apprenticed to the artist Domenico Ghirlandaio at the age of 13, and he quickly showed a natural gift for sculpture and an outstanding talent as a painter. He left after a year's training on the grounds, so we are told, that he had no more to learn! He then worked in the Medici gardens and in the household of Lorenzo the Magnificent. Here he came under the tutelage of the sculptor Bertoldo di Giovanni, and in contact with some of the treasures of classical Roman art. And it was here that he produced, among other works, two relief sculptures - the Battle of the Centaurs and the Madonna of the Stairs. Both of these showed an advanced, individual style and marked him out as an artist of extreme promise (both illustrated below).

xxxxxIn 1494, following the expulsion of the Medici family, he left Florence - then coming under the rule of the fanatical Savonarola - and spent a couple of years in Bologna before going on to Rome. His major work in Bologna was the execution of a number of marble statuettes for the shrine of San Domenico, but it was in Rome that he produced two masterpieces that put him head and shoulders above his contemporary sculptors. 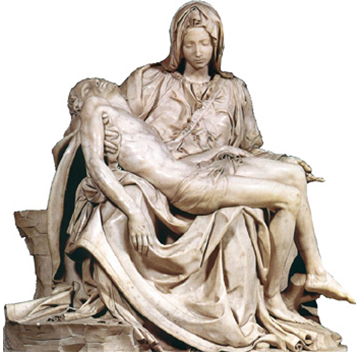 The first was a lively, larger-than-life Bacchus, a pagan subject which was well received in Renaissance Rome. The second, by contrast, was a work of outstanding beauty, a sculpture which is regarded today as one of the world's most exquisite pieces of art: his Pietà (illustrated) completed and signed in 1500. A young Mary is shown seated, the dead Christ lying across her lap. The whole piece is magnificently composed and executed, and the beautiful face of the Madonna shows not so much sorrow as dignity and resignation. It was not meant to be authentic, nor even dramatic, but a magnificent monument to beauty and tenderness. As such it saddens the heart but uplifts the soul. It stands today in its original place in St. Peter’s Basilica, and is one of the great gems of Italy’s High Renaissance.

xxxxxMichelangelo returned to Florence in 1501, and was soon engaged on yet another and very different masterpiece, his colossal figure of the biblical David, carved from a block of Carrara marble and completed in 1504. Standing over fourteen feet high, it shows the nude figure of the young David, lithe and alert, sling in hand. In this brilliant piece of sculpture, it is, in fact, David who is the giant, not Goliath. He awaits not the challenge of man, but of man's future. He has become the symbol of Florence, both of its independence and the Renaissance to which the city gave birth. It was originally placed in the Plazza della Singoria, in front of the Palazzo Vecchio. 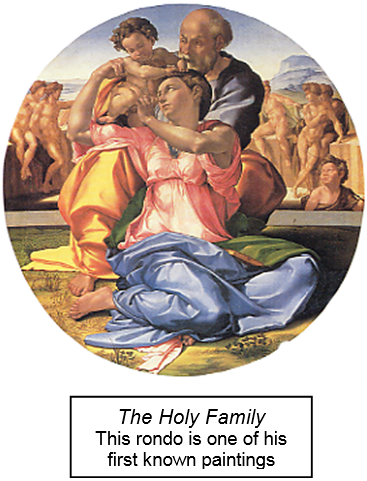 this return visit to Florence his painting was not neglected. To this period belongs his masterpiece of 1503, The Holy Family, produced for his patron Angelo Doni, and in the following year he was commissioned to paint a large fresco for the new council hall of the Florentine republic. Intended as a companion piece to a battle scene by Leonardo da Vinci (The Battle of Anghiari), Michelangelo chose an episode from the Battle of Cascina during the war with Pisa, when Florentine forces were surprised by the enemy while they were bathing. Both made cartoons for their work (full size preparatory drawings) but neither work was ever completed.

xxxxxIn 1505 he was summoned to Rome to work on a vast tomb for Pope Julius II. It was an assignment which was to take many years to complete, and progress was interrupted as early as 1508 when Michelangelo - a sculptor at heart - reluctantly agreed to begin work on decorating the vaulting in the Sistine Chapel. As we shall see, it was a task which, when completed in 1512 (H8), was to confirm his place as the greatest artist ever produced by Western civilisation.

Illustrated here are the reliefs, The Battle of the Centaurs and Madonna of the Stairs.

xxxxxThe Florentine genius Michelangelo, a pupil of Domenico Ghirlandaio, worked for the Medici for some time before leaving his native city in 1494. In Rome he executed two of his finest sculptures, the large and lively Bacchus, and the strikingly beautiful and sorrowful Pietà, completed in 1500, and still in its original place in St. Peter's Basilica. He returned to Florence the following year and it was here in 1504 that he completed his colossal figure of the biblical David, a work of beauty which has come to symbolise the independence of Florence and the city's contribution to the world of art. And it was at this time that he produced his masterpiece The Holy Family, and worked alongside Leonardo da Vinci in the city's new council hall, painting but never completing a scene from the Battle of Cascina. In 1505 he was back in Rome, working on a vast tomb for Pope Julius II. Three years later, however, he began decorating the ceiling of the Sistine Chapel, a task which, when completed in 1512 (H8) - as we shall see - was to confirm his place as the greatest artist ever produced by Western civilisation. 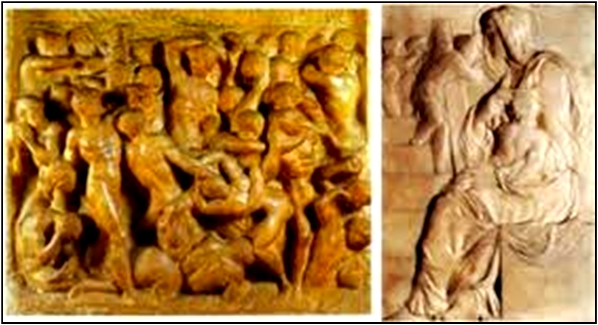