xxxxxAs we have seen, the Battle of San Jacinto in 1836 (W4) gained Texas independence from Mexico. Ten years later, in 1846, the United States annexed Texas and, according to the Mexicans, took over land belonging to them. They crossed the Rio Grande to regain their lost territory, and this was seen as a declaration of war by the U.S. President James Polk, who was anxious to extend the Union to the Pacific Ocean. General Zachary Taylor was sent to invade Mexico and, after capturing Monterrey in September 1846, defeated the Mexican leader, Santa Anna, in a close fought battle at Buena Vista in February the following year. In the meantime Colonel Stephen Kearny had captured both New Mexico and California, but it took the capture of Mexico City by General Winfield Scott in the September before the Mexicans sued for peace. By the Treaty of Guadaloupe Hidalgo in 1848, New Mexico and California were annexed by the United States, together with the present-day states of Utah, Nevada, Arizona and western Colorado. All Mexico received was an indemnity of $15 million. But the extension of the United States to the west reopened the question of slavery, and increased the growing antagonism between the northern and southern states. As we shall see, this was to lead to the American Civil War in 1861. 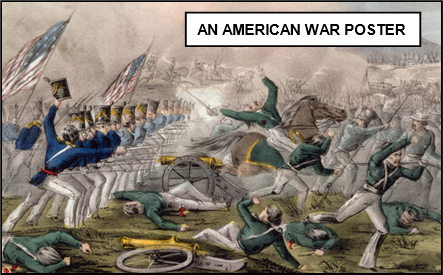 xxxxxAs we have seen, the Battle of San Jacinto in 1836 (W4) won for the American settlers in Texas, and for the native inhabitants, their independence from Mexico. For the next ten years Texas was a republic with Sam Houston as its president, but during these years there were constant raids from Mexico, and the state was beset with money troubles. As a result the vast majority of Texans favoured joining the United States, and this came about in 1846. But this annexation opened up fresh troubles with Mexico. The U.S. government not only took over Texas - a bone of contention in itself - but also occupied land to which the Mexicans themselves laid claim. The result was the Mexican War and a further expansion of the United States to the Pacific coast. 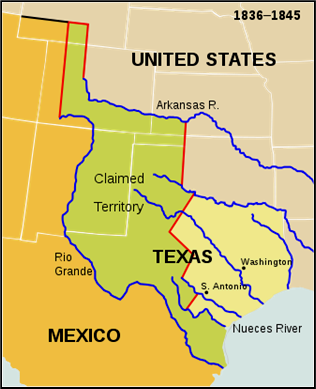 xxxxxIn November 1845, prior to the outbreak of hostilities, President James Polk had sent a diplomat, John Slidell, to Mexico to seek boundary adjustments and to arrange, if possible, the purchase of New Mexico and California, two northern provinces in which many U.S. citizens had settled. When the Mexican government, in the hands of the dictator Jose Joaquin Herrera, refused to discuss such propositions, the United States took matters into its own hands and despatched an army under General Zachary Taylor to extend Texan territory up to the Rio Grande. The Mexicans, however, held that their northern border with Texas was the Nueces River, further to the north-east, and in April 1846 sent an armed force across the Rio Grande to recapture their territory, killing or wounding 16 U.S. soldiers in the process. To the Americans this was nothing short of an invasion, and Congress declared war upon Mexico the following month. Polk firmly believed in what was known as “manifest destiny” - the idea that the Americans had a mission to extend their democratic ideals across the whole of the continent -, and this was a perfect opportunity to put it into practice. 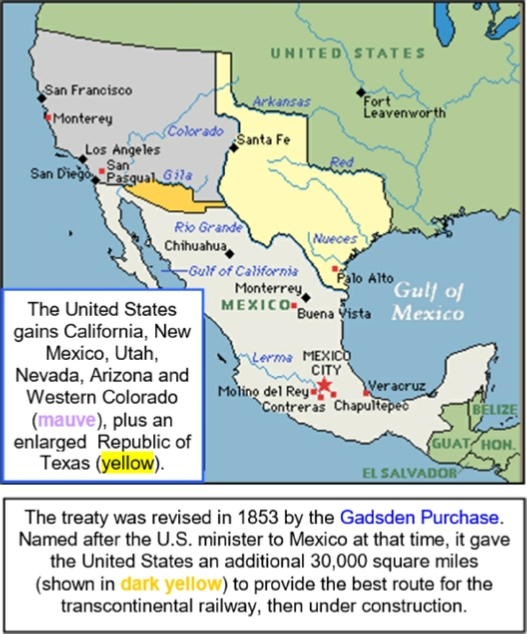 xxxxxButxeven before the official outbreak of war, General Taylor, had defeated the Mexicans at the Battles of Palo Alto and Resaca de la Palma at the beginning of May, and driven them back across the Rio Grande. He then advanced into Mexico, captured Monterrey in the September, and went on to defeat President López de Santa Anna (who had regained power by then) in a close fought battle at Buena Vista in February 1847. This victory opened up the whole of northern Mexico. In the meantime General Stephen Kearny had occupied today’s New Mexico, and then advanced into California, where the people had already declared their independence from Mexico. But despite this run of victories and a successful blockade of Mexican ports, it took the capture of Mexico City before López de Santa Anna would accept defeat. This was achieved by troops under the command of General Winfield Scott. He captured the vital port of Vera Cruz from the sea in March 1847 and, after a series of victories, Mexico City was occupied in the September.

xxxxxThexTreaty of Guadaloupe Hidalgo which ended the war, made in February 1848 and ratified in the October, was highly favourable to the United States. The Rio Grande was agreed as the southern boundary of Texas, and both California and New Mexico were annexed by the United States. And in addition, Mexico ceded nearly all the territory in the present-day states of Utah, Nevada, Arizona and western Colorado, making a total well over one million square miles. In return the U.S. government gave Mexico a large indemnity of $15 million, and undertook to settle all claims of U.S. citizens against Mexico, but it was a small price to pay for such a vast sweep of real estate.

xxxxxBut this settlement, a triumph for U.S. arms and diplomacy, had serious repercussions in the country at large. The whole question of slavery and the extension of this practice into these newly acquired territories gave rise once again to the antagonism which divided the northern and southern states. A compromise was reached in 1850, but, as we shall see, this question of slavery was to be a prime motivator in the outbreak of the American Civil War in 1861.

xxxxxIncidentally, the Mexican War was one of the most costly in American military history. Of the total army, numbering well over 100,000 men, only 2 percent were killed in the fighting, but it is estimated that close to 10 percent died of disease, and that a larger number of men were wounded or discharged because of sickness. …… 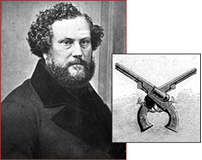 xxxxx…… The American gunsmith Samuel Colt (1814-1862) who, as mentioned earlier, invented the colt revolver in 1835, produced a large number of these weapons for the War of Texan Independence. A year later he began manufacturing rifles and shotguns based on the same principle, but these proved far less reliable, and his company was wound up in 1842. ……

Xxxxx…… However, with the coming of the war between the United States and Mexico he was back in business again. He was given a government order for 1,000 pistols during that conflict, and his Colt Industries, established at Hartford, Connecticut in 1854, became the largest private armoury in the world. His company supplied thousands of guns to the Union side throughout the American Civil War, and he died a very wealthy man.