xxxxxAs we have seen (1200 JO), for reasons unknown, the great Mayan civilisation went into decline in the tenth century. Some Mayas moved north to the Yukatan peninsula. Here, together with the Toltecs, they formed a state, first centred on Chichen Itza and then on the walled city of Mayapan. Over the next two centuries, however, large numbers of immigrants arrived from central Mexico, and this sapped the empire's wealth and energy. After a period of civil war, the state began to break up. The despotic rulers were overthrown in 1460 and what was left of the empire could offer little resistance when the Spanish conquistadors arrived in the following century. 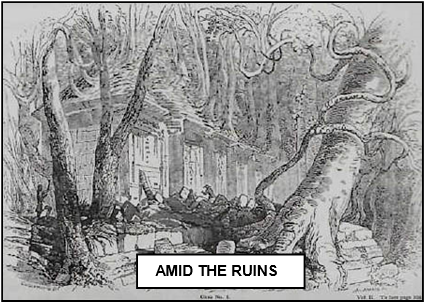 Maya had settled in villages in modern day Guatemala and El Salvador as early as 1,500 years BC, and their development was such that by the ninth century AD they had constructed one of the greatest civilisations in the western world. At that time the Empire could boast of dozens of cities and ceremonial centres, each with huge stone buildings and stepped pyramids. Their artisans showed great skill in gold and copper work, their weavers and potters were highly productive, and extensive irrigation schemes made possible intensive farming methods. They developed their own form of pictorial writing and worshiped a large number of nature gods. Their religious rituals involved human sacrifice, and their ceremonies were regulated by reference to an elaborate calendar based on the movements of the moon and Venus.

aaaaaIn the early part of the tenth century, this advanced civilisation went quickly into decline, possibly because of climatic change, shortage of agricultural land, or the sudden incursions of neighbouring tribes. But, as we have seen (1200 JO), all was not lost. Some Mayas moved to settlements established earlier in the north of the Yucatan Peninsula, and established a smaller but thriving state based around the impressive city of Chichen Itza. Later, the Toltecs expanded into this region and the two peoples, so it would appear, worked fairly well together. In 1187 Chichen Itza was weakened by an internal revolt and lost its prominent position, but by about 1200 a new centre had been developed around the walled city of Mayapan. Then later the League of Mayapan was formed incorporating other cities in the area, including Chichen Itza. It was virtually a revival of Empire. 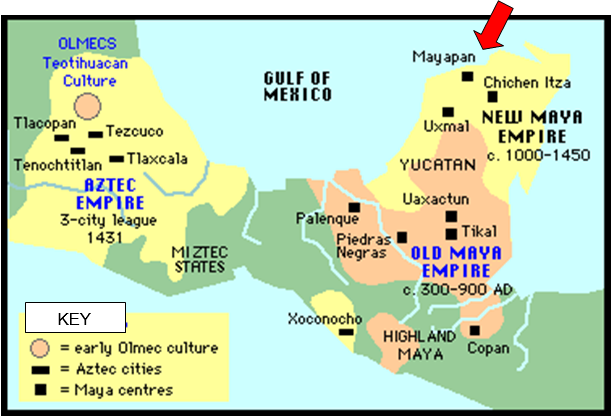 aaaaaOver the next two centuries, however, a large influx of people from central Mexico, - doubtless attracted by the good life - plus a growing conflict between the diverse people which began to make up the population, sapped the Empire's wealth and energy. After a period of civil war, the despotic rulers of Mayapan were overthrown in 1460 or thereabouts, and the city, situated about 35 miles south east of today's Merida in Yucatan state, was hastily abandoned, along with other major centres. Those Mayas who remained in the area settled in small isolated towns and villages and, for the most part, returned to a life of farming. And this is how the Spaniards found them when they arrived looking for gold in the early part of the sixteenth century. They did not offer much resistance, but it is interesting to note that they resisted the European invaders longer than either the Aztecs of this area or the Incas of Peru.