xxxxxA serious uprising against the rule of the British South Africa Company broke out in Rhodesia (Matabeleland and Mashonaland) in March 1896, soon after the failure of the Jameson Raid into the Transvaal. The Matabele and Shona people blamed the white settlers for the loss of their traditional way of life and their valuable grazing land, and their spiritual leader Mlimo held them responsible for the on-going drought, a plague of locusts, and the deadly cattle disease rinderpest. After a number of whites had been murdered, the settlers were forced to build local laagers to defend themselves. Many took refuge in Bulawayo. There an elaborate defence system was put in place, and the Bulawayo Field Force was established. This mounted raids against the native forces surrounding the city and went to the help of stranded settlers. Among those who led these patrols was Colonel Robert Baden-Powell, founder of the Boy Scout Movement. Bulawayo was saved by the arrival of two relief columns in May, one led by Cecil Rhodes, and the battle was then taken to the Matabo Hills, where a native army of some 50,000 had taken cover. After some fierce fighting - in which the Maxim machine again proved decisive - and the killing of Mlimo, Rhodes persuaded the Matabele to sue for peace, but it was not until October 1897 that the Shona people of Mashonaland finally laid down their arms. The British South Africa Company then resumed its control of the country.

xxxxxIt was in March 1896, soon after the British suffered the humiliation of the disastrous Jameson Raid upon the Transvaal, that a serious uprising broke out in Rhodesia (the combined areas of Matabeleland and Mashonaland). Discontent among the native population had long been growing. Rule by the British South Africa Company, imposed at the end of the First Matabele War of 1893, had denied them their traditional way of life. The nation had conceded defeat in 1894, following the death of their king Lobengula, but its army had been left largely intact. And the indemnity imposed by the Company - in the form of cattle - had proved particularly costly following the outbreak of rinderpest, a highly contagious animal disease. In addition there was deepening alarm over the increasing number of white settlers, searching for gold or setting up large farms on valuable tribal grazing land.

xxxxxThe withdrawal of the white police force earlier in the year to accompany Jameson on his ill-fated invasion of the Transvaal, gave the dissidents the opportunity they had been waiting for. The country was at their mercy, and hatred towards the whites was stirred up by the Ndebele spiritual leader Mlimo. He blamed the settlers and prospectors for the country’s string of on-going disasters - drought, a plague of locust and rinderpest - and convinced the many that he had turned the white man’s bullets into water and his shells into eggs. 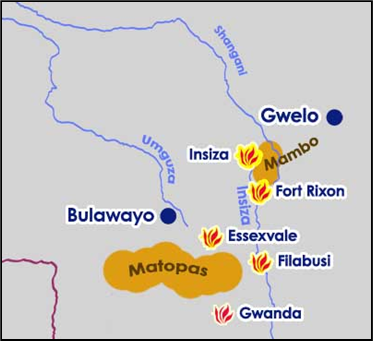 xxxxxThe conflict that followed, The Second Matabele War - known locally as the First Chimurenga, (meaning First Resistance) - is regarded in today’s Zimbabwe as the country’s first war of independence. Within the first few weeks of the revolt, dozens of white settlers were brutally killed, and many more were slaughtered over the coming months. Those who escaped the bloodbath set up local laagers - such as those at Gwelo, Mangwe and Belingwe - or made their way to Bulawayo, where a huge, wall-defended laager had been constructed in the centre of the city. Armed with hunting guns and a small number of machine guns and pieces of artillery, the white settlers managed to held out against a large native force. The Matabele (Ndebele) having learnt to their cost the destructive power of the machine gun during the war of 1893, seldom made a full frontal attack, but, from their bases in the Matabo (or Matopas) Hills, they constantly harassed the beleaguered city. The besieged, for their part, also took the fight to the enemy. They formed the Bulawayo Field Force, and this sent out constant mounted patrols to rescue stranded settlers, carry out hit and run attacks, or engage the enemy full-on where possible. Casualties were quite heavy - 20 killed and 50 wounded in the first week alone - but these patrols helped to keep the enemy at bay. Among those who led these patrols was Frederick Selous, a famous big game hunter, Frederick Burnham, an American scout, and the army officer, Colonel Robert Baden-Powell. 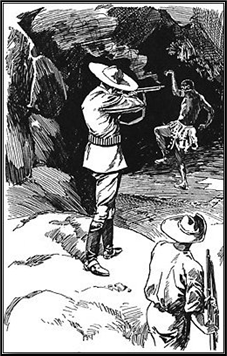 xxxxxConditions within Bulawayo were desperate. In addition to the men, some one thousand women and children were crammed into the city. However, fortunately for the settlers, the Ndebele had not cut the telegraph wires to Mafeking, on the Bechuanaland border, so help could be sought. A number of relief columns were organised, and two of these reached Bulawayo in May, one from Salisbury, led by Cecil Rhodes, and the other from Kimberley 600 miles to the north. After some fighting close to the city, the Matabele (or Ndebele), some 50,000 in number, took to their strongholds in the Matabo Hills, and it was in this rugged terrain that the fiercest fighting took place, the maxim machine gun again proving the decisive factor. The final break through for the settlers came when a Zulu informer told them of the whereabouts of the Matabele medicine man Mlimo. Two scouts, sent out to hunt him down, found him in his sacred cave, and shot him dead during his dance of immunity (drawing by Baden-Powell). From then on resistance began to crumble, and Rhodes was able to arrange a peace settlement, but it was not until October 1897 that the Shona people of Mashonaland finally laid down their arms.

xxxxxThe British South Africa Company resumed its control of the country until 1924, when the British colonial office became responsible for the territory. In October 1964 the northern region became the independent nation of Zambia, but in 1965 a white-minority government in the south made a unilateral declaration of independence and the region did not become fully independent until the creation of Zimbabwe in 1980. 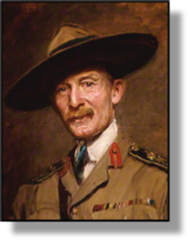 xxxxxIncidentally, it was while taking part in the patrols of the Bulawayo Field Force that the soldier Robert Baden-Powell learnt a great deal about woodcraft from the American scout Frederick Burnham. It was the skills learnt then that gave him the idea of creating an organisation for boys in which outdoor activities would help to develop character and personal fitness. The boy scout movement was formed in 1908. As we shall see, Baden-Powell was to play a prominent role in the Siege of Mafeking during the Second Anglo-Boer War, starting in 1899.