xxxxxAs we have seen, it was in 1888 that the South African politician and entrepreneur Cecil Rhodes obtained permission from the Matabele chief, Lobengula, for his trading company, the British South Africa Company, to search for minerals in part of his kingdom. Once elected prime minister of the British Cape Colony in May 1890, he persuaded his friend, Dr Jameson, to lead a pioneer column to open up the way to Mashonaland, an area thought to have gold deposits. After setting up forts along the way, the expedition founded Fort Salisbury in the September and claimed the area for the British crown. This alarmed Lobengula. He invaded Mashonaland to keep control of his people, and this caused The First Matabele War in 1893. The Matabele had great superiority in numbers, but the company’s troops were well armed with rapid firing rifles and the new Maxim machine gun. As a result they defeated the Matabele at battles near the Shangani and Bembesi Rivers, and, with the death of Lobengula, the war came to an end in 1894. Matabeleland and Mashonaland were annexed by the British South Africa Company and given the title of Rhodesia in May 1895. White settlement began on a large scale, but, as we shall see, in 1896, in the wake of the Jameson Raid, a rebellion against British rule brought about The Second Matabele War.

xxxxxAs we have seen, it was in 1888, that the South African politician and entrepreneur Cecil Rhodes, in exchange for money and a large supply of firearms, gained some important concessions from Lobengula, the king of the Matabele. By this agreement - reached due to the close friendship which existed between Lobengula and the English doctor Leander Starr Jameson - Rhodes gained exclusive mining rights to a large stretch of land situated between the Limpopo and Zambia Rivers. In May 1890 Rhodes was elected prime minister of the British Cape Colony and, with the aim of strengthening British control over South Africa - and the valuable mineral deposits that went with it! - he used his British South Africa Company, formed the previous year, to extend his authority. He persuaded Jameson to abandon his medical practice and take charge of an army of pioneers in order to open up a route through Matabeleland and reach and annex the territory known as Mashonaland, a likely source of mineral wealth. 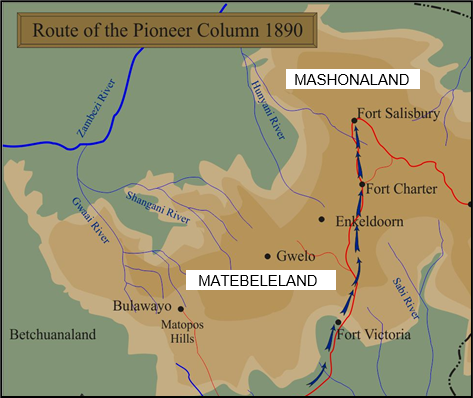 xxxxxJameson was put in charge of a pioneer column of some 180 white settlers, supported by 200 police of the British South Africa Company, and work on clearing the way through 400 miles of trackless, difficult terrain was begun in the July. Forts named Victoria and Charter were built along the way, the union jack was raised at Fort Salisbury (modern Harare) in the September, and the following year Jameson was appointed administrator of Mashonaland, the traditional home of the Shona people.

xxxxxThroughout this undertaking both Rhodes and Jameson had been careful not to antagonise Lobengula, but the Matabele chief, despite the concessions he had granted - perhaps because of them - remained wary of British intentions. He was anxious to reassert his authority in the area, and border disputes with Mashonaland - now virtually an enclave of the British South Africa Company - gave him the opportunity to do so. For some time Jameson ignored these minor skirmishes along the border, but in July 1893 Lobengula sanctioned a full scale invasion to extract tribute from a dissident Mashona chief in the area of Fort Victoria. This attack, brutal in the extreme, provided Jameson with the excuse for war. Arguing that he needed to keep the loyalty of the Mashona people, he ordered the Matabele to withdraw. When they refused to do so, conflict was seen as the only solution. Jameson prepared an army for the invasion of Matabeleland, but had to wait for the approval of Rhodes, and then that of the home government - which eventually concluded that the destruction of the Matabele (or Ndebele) would be good for the whole of South Africa. 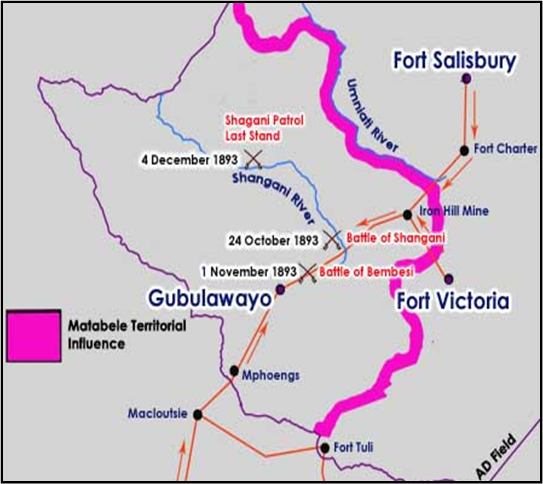 xxxxxIn the conflict that followed, beginning in October 1893 and known as The First Matabele War, Lobengula’s army - as one would expect - had a decisive advantage in numbers. It could field some 100,000 men, but the vast majority were armed only with spears and the 20,000 who possessed firearms were ill-trained. In contrast, the Company’s force was only 1,100 strong, but it was well equipped with modern rifles and had a number of the new Maxim automatic machine guns, being used by the British for the first time.

xxxxxIt was planned that three columns of about 250 men each would join forces at Iron-Mine Hill on the Matabele border, whilst (see map) a fourth, a column of Bechuanaland border police, would advance on the capital of Bulawayo from the south-west. Thexinvasion force crossed the border in late October and the first encounter took place on the 1st November. Having crossed the Shangani River, a force of some 700 men came under attack. From their laager, however (an encampment defended by a circle of wagons), they inflicted heavy losses on the attacking tribesmen, mainly by rifle and machine gun fire (illustrated below). Such was the carnage that Ndebele forces, held in reserve, were not committed to the battle. It is estimated that some 1,500 natives were killed for the loss of four dead and six wounded. Then the following day a further victory was secured at the Battle of Bembesi, and a column advancing from the south won a decisive victory alongside the Singuesi River. Once again the Maxim guns and rapid-firing rifles inflicted heavy casualties. 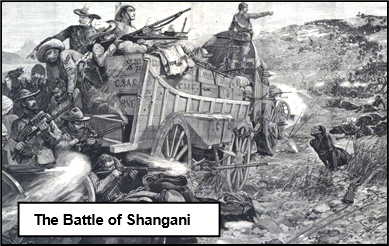 xxxxxHaving won the battles of Shangani and Bembesi, Jameson decided to make straight for the capital Bulawayo (Gubulawayo), advancing in two columns. In the meantime Lobengula, having learned of his army’s defeats, set fire to his capital and fled into the bush. When the advanced guard reached the town they found that the arsenal and most of the wooden and mud huts had been destroyed. In an attempt to capture the king and bring the conflict to a speedy end, Jameson then sent out a force, some 300 strong, to find the Matabele chief. In December an advance party of 35 men crossed the Shangani River and, having traced his whereabouts, encamped overnight to await reinforcements. During the night, however, heavy rain made the river too difficult to cross. Thexsmall contingent, known to this day as the Shangani Patrol, was completely surrounded by the Ndebele. Three managed to escape across the river, but the remainder went down fighting.

xxxxxBut despite this setback, the end of the war came with news of Lobengula’s death, caused, it is believed, by smallpox or dysentery. The Matabele acknowledged defeat by mid-1894, and their kingdom was annexed by the British South Africa Company. The entire British force was paraded before Rhodes at a ceremony at Bulawayo to mark the end of the conflict.

xxxxxThe following year Jameson was appointed the first administrator of Matabeleland, and by a proclamation in May 1895 this territory, together with Mashonaland, was officially given the title of Rhodesia in honour of the man who had extended British influence further into South Africa. White settlement began on a large scale, but peace was not to last for long. As we shall see, in March 1896, in the wake of the Jameson Raid, the Matabele rose up against their colonial masters and brought about The Second Matabele War.

xxxxxIncidentally, it later emerged that Lobengula, following the defeat of his army at Shangani River, had in fact sent a quantity of gold as a peace offering to Jameson. However, the two troopers assigned to take the message of surrender absconded and shared the gold! They were later caught and imprisoned. ……

xxxxx……xxIn November 1891 Lobengula, concerned that the British South Africa Company was taking more than it was entitled to, granted a German financier named Edward Lippert the exclusive right to land in Matabeleland and Mashonaland. Rather than object and risk raising questions as to his company’s own activities, Rhodes purchased the Lippert Concession outright, at considerable cost! ……

xxxxx……xxInxSalisbury early in 1891 volunteers were invited to settle in the healthy upland area of Manicaland, situated south-east of the town. Mineral rights had been agreed with the territory’s chief, but this occupation provoked an international incident. Alarmed at the expansion of British power in the region, the Portuguese colonists on the East Coast threatened to drive the South Africa Company out of the area. They eventually withdrew their threat, and the matter was peacefully resolved by the Anglo-Portuguese Treaty of 1891. …… 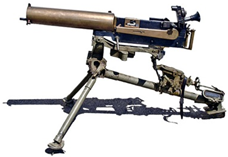 xxxxx……xxThexmaxim machine gun, the first to be fully automatic, was invented by the American-born Englishman Hiram Maxim (1840-1916) in 1885, and adopted by the British Army four years later. It was used in the two Matabele Wars, and in the Battle of Omdurman in 1898, and a larger version, known as the pom-pom, came into service during the Second Anglo-Boer War of 1899 to 1902.