xxxxxThe Communist Manifesto, published in 1848, was a punchy, inflammatory pamphlet written by the two German social and economic philosophers, Karl Marx and Friedrich Engels. It argued that history had been a long and bitter struggle between the classes of society, and that this was destined to end in a violent overthrow of the privileged élite and the establishment of a society organised by the ordinary working people. It called upon the workers of the world to unite, throw off their chains, and take over the political and economic power of their countries. The Manifesto was written for the newly formed Communist League, and had little immediate effect. However, it was translated into many languages, published in vast numbers, and provided the basis for the communist ideology, expounded in detail in Marx’s later work, Das Kapitas (Capital). As we shall see, this monumental study, the first volume of which was published in 1867 (Vb), spelled out the doctrine which came to be known as Marxism, and was adopted by the Union of Soviet Socialist Republics (the former Russian Empire) in 1917. 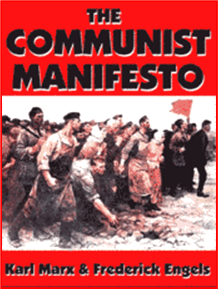 xxxxxThe Communist Manifesto, written by the German social and economic philosopher Karl Marx in collaboration with his fellow countryman and philosopher Friedrich Engels, was a call for a workers’ revolution, published, as it so happened, in January 1848, just before a spate of rebellions broke out across Europe.

xxxxxThe course of history from feudalism to capitalism, the authors maintained, was one long struggle between the classes of society, a struggle which was destined to end in the overthrow of the current ruling élite, based on money and privilege, and the establishment of a society totally organised by the ordinary working people. The workers of the world needed to unite in order to throw off their chains and create a society in which political and economic power based on birth, money and private property was abolished. In this assault against the “capitalists”, the ruling bourgeoisie, the “Communists” were to be the theoretical leaders and vanguard of the “proletariat”, the downtrodden working class.

xxxxxAmongst the reforms advocated by the pamphlet as the first steps toward communism was a high and progressively graded income tax, the abolition of the right of inheritance, the state ownership of factories, the creation of labour forces for work on the land, and free education for all children. A concluding paragraph reads: 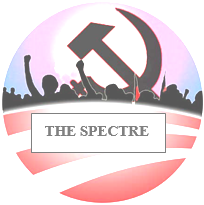 xxxxxThe manifesto was written to provide the objectives of the newly formed Communist League, a small, secret organisation, mostly made up of emigrant German craftsmen and intellectuals, which had met in London the previous year under its original title The League of the Just. As such, the statement had little or no immediate impact upon the current political scene. Nonetheless, this punchy, inflammatory manifesto was translated into many languages, an 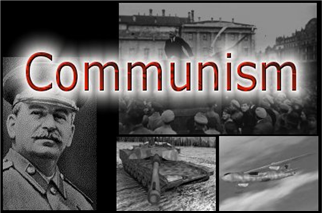 d published in vast numbers. Furthermore, its opening words - "A spectre is haunting Europe, the spectre of communism", proved prophetic. Its basic proposals, developed and refined under what came to be known as “Marxism”, was to become the official doctrine of the Union of Soviet Socialist Republics (the former Russian Empire) as from 1917, and to create a regime which actually did come to haunt and threaten the peace of Europe, and, indeed, the world, for much of the 20th century.

xxxxxMarx’s expansion of the basic principles outlined in the manifesto - which included the idea of a rigid planned economy - was contained in his monumental work Das Kapitas (Capital), the first volume of which was published in 1867 (Vb).

xxxxxIncidentally, in the Communist Manifesto both Marx and Engels recognised that there was an undesirable section of the industrial working class, including the likes of criminals and drifters. They called this “social scum” the Lumpenproletariat or “rabble proletariat”.

“The communists consider it superfluous to conceal their opinions or their intentions. They openly declare that their aims can only be achieved by the violent overthrow of the whole of the contemporary social order.”