xxxxxAs we have seen (1673 C2), in the first half of his reign the great Manchu leader of China, Emperor K’ang-hsi, gained control of his empire and conquered Taiwan. Then in 1689 he forced the Russians to make the Treaty of Nerchinsk to settle the Russian-Chinese border. This left the Amur valley and Manchuria within China, but gave Russia the region of Transbaikalia, and a passage to Peking for its trade caravans. It also left both countries free to advance elsewhere. Russia now concentrated on its drive to the Pacific, whilst in 1696 K’ang-hsi led a military expedition across the hostile Gobi Desert - an incredible feat - and took over the vast area of Outer Mongolia. Then, in his final campaign in 1720 he incorporated Tibet into his empire. A military leader of outstanding ability, he also encouraged trade and industry, took a keen interest in all aspects of government, and, as a scholar, was a great patron of the arts. His grandson, Ch’ien-lung, whom he personally groomed as a leader, became emperor in 1736. As we shall see, having crushed a revolt in Tibet in 1752 (J2), he was to bring the Manchu Empire to the height of its power by his death in 1796. 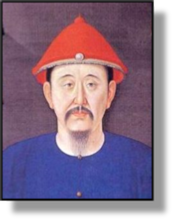 xxxxxAs we have seen (1673 C2), the first great Manchu leader of China was the Emperor K'ang-hsi. He was only seven when he came to the throne, but by the age of 15 it was clear that he had acquired a firm grasp and astute understanding of the affairs of state. His first aim was to unite and consolidate his hold on the whole of China. By 1681 he had achieved this very goal after defeating a powerful alliance of warlords known as the Revolt of the Three Feudatories.

xxxxxSecure at home, he invaded Taiwan two years later and, after taking the island, opened it up to trade with the mainland, thereby establishing a lucrative industry in the export of silk, tea and chinaware. In like manner he also improved the economy of China, repairing the Grand Canal to improve internal and international commerce, and putting in hand a vast scheme to stop the flooding of the Huang Ho river.

xxxxxBut his greatest challenge came from the north. Here the Russians, having reached the Amur River, had built a chain of forts and carried out raids against the local inhabitants. Characteristically, K'ang-hsi took direct action. In 1685 he attacked the Russian fortress of Albazin, and after a protracted siege brought the Russians to the negotiating table. The Treaty of Nerchinsk, signed in 1689, defined the Russo-Chinese border and was ratified by the new Tsar, Peter I, when he assumed power later that year. 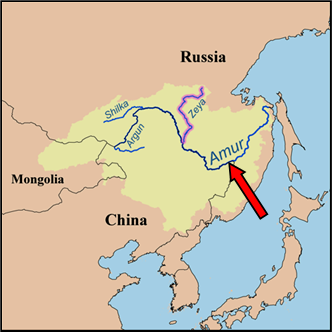 xxxxOn the face of it, the settlement favoured the Chinese. The border was drawn along the River Gorbitsa, a tributary of the Amur, and the Stanovoy Range, thus leaving the Amur valley and Manchuria (homeland of the dynasty) within the Chinese empire. Furthermore, the Russians were obliged to remove their forts from the Amur River basin (arrowed), and their access to the Sea of Okhotsk - and the Far Eastern markets beyond - was severely restricted. On the other hand, Russia received Transbaikalia (the region to the south and east of Lake Baikal), and was granted passage to Peking for its trade caravans. In addition, there were factors of greater significance. Firstly, China had negotiated with Russia on equal terms, thus recognising her neighbour as having equal political status. Secondly, by having its border with China clearly defined, the possibility of future conflict had been much reduced, together with Russia's likely defeat! Thirdly, prevented from further advance along the Amur River, Russia now concentrated its efforts on developing its territory towards the Pacific Ocean, reached earlier in the century. This agreement, qualified somewhat by the Treaty of Kyakhta in 1727, remained basically intact until the middle of the 19th century.

xxxxxConfident that the Nerchinsk agreement would hold, K'ang-hsi now prepared his forces for an invasion of Outer Mongolia. Here the country was occupied by the Dzungars, a nomadic people who had forced the native inhabitants, the Khalka Mongols, to take refuge in Inner Mongolia. Having received a firm pledge of 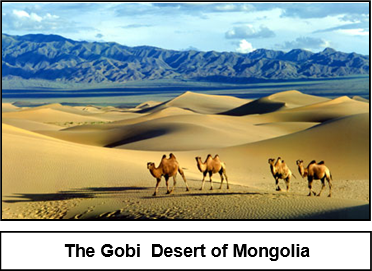 support from the Khalka tribes, the emperor then achieved what most military observers would have termed the impossible. In 1696 - despite the distress caused by extreme hunger and thirst - he led a military expedition across the hostile Gobi Desert (arrowed on map below), and, using artillery, totally annihilated the Dzungar army at Dzuunmod, east of present-day Ulaanbaatar. We are told that Galdan, the leader of the Dzungars, fled to his hideout in the Altai Mountains and committed suicide. In the meantime Outer Mongolia was made an integral part of the Chinese empire, and the Khalka Mongols were able to return to their homeland.

xxxxxK'ang-hsi's final expedition came some twenty years later when the Dzungars again disturbed the peace by invading Tibet and occupying Lhasa. In 1720 he sent his army to expel them (arrowed on map below), and then took the opportunity to incorporate Tibet into his empire. The map below shows the extent of the Manchu dynasty up to 1690. It survived until the declaration of a republic in 1911.

xxxxxBy any standards, K'ang-hsi was a most remarkable leader. Quite apart from his prowess as a fighting soldier and a military tactician, he showed a keen interest in all aspects of government and was particularly anxious to encourage industry and international trade. He was also a great patron of the arts and, as a scholar himself, showed an interest in other cultures and was quick to learn from them. Perhaps his greatest achievement, however, lay in the field of taxation. We are told that throughout his long reign he never raised taxes and, indeed, reduced or waived them on occasions! No wonder he was such a popular leader!

xxxxxHis grandson Ch’ien-lung, whom he groomed for power, became emperor in 1736. As we shall see, having crushed a revolt in Tibet in 1752 (J2), he was to bring the Manchu Empire to its greatest size and strength by his death in 1796.

xxxxxIncidentally, in 1712 K'ang-hsi sent three envoys into southern Russia to confer with the Volga Kalmyks, a people who had migrated there in the early part of the 17th century. During their three-year mission they travelled extensively in Siberia and, on their return, one of them, a man called Tulishen, wrote a detailed account of their travels in a book entitled I yu lu (A Record of Strange Regions.) 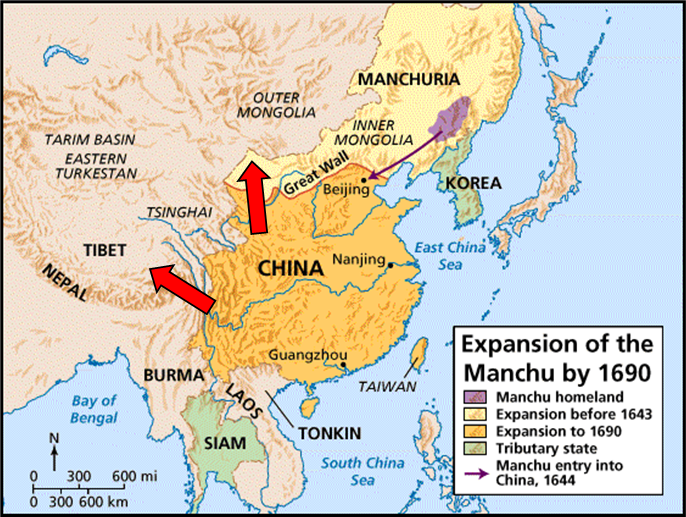