xxxxxThe Mamluks - originally slaves - seized power in Egypt in 1250. One of their ablest rulers was Baybars I (1260-1277). He it was who, earlier, had overthrown the Seventh Crusade outside Cairo and, ten years later, defeated the Mongol leader Helugu in Palestine. From 1265 onwards he constantly attacked the Christians and, by 1271 had taken all their major strongholds along the coast. At home he united Egypt and Syria and greatly improved the country's prestige and influence. He is also remembered for his vast building programme. As we shall see, the Mamluk dynasty remained in power until 1517 (H8). 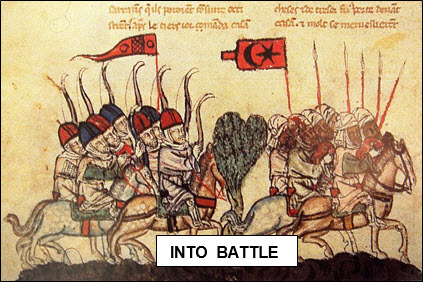 xxxxxThe word Mamluk derives from Arabic and means “slave”. This indeed is what the Mamluks were, but as early as the ninth century they were also employed as soldiers in the Sultan's army, and some of them became high ranking officers. When Egypt’s ruler, As-Salih, died in 1250 a power struggle followed in which the Mamluks, killing the heir to the throne, seized power. The dynasty they then formed was destined to last for more than 250 years and to provide some extremely fine rulers.

xxxxxOne of these able rulers was Baybars I, who governed from 1260 to 1277. He was an outstanding soldier and gained fame for his defence of the homeland. It was Baybars who, in 1250, defeated Louis IX of France and took him captive during the Seventh Crusade, and it was also Baybars who, ten years later, near Nebulus in Palestine, kept the Mongols at bay by defeating their army, led by Hulegu, grandson of Genghis Khan. It was in this year, too, that he murdered the Sultan and seized his throne. He then turned his attention to the Latin Kingdom in Palestine, determined to eliminate any further threat from the Crusaders. From 1265 he launched annual attacks upon the Christian strongholds, and by 1271 Caesarea, Haifa, Galilee, Antioch and Jaffa had been captured and their inhabitants massacred. All that remained of the Christian domains were a few precarious outposts scattered along the Mediterranean coast. The Crusaders never recovered from this onslaught. 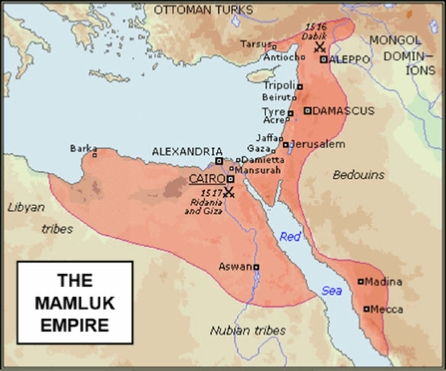 xxxxxApart from his prowess as a soldier, Baybars proved an able administrator and politician. He united Egypt and Syria into one state, overhauled the kingdom's administration, and by sound diplomacy immensely improved his country's prestige and influence. He is remembered, too, for an extensive building programme, including the mosque and school in Cairo that bears his name today. He died in 1277 - apparently drinking a poisoned chalice which was not meant for him - and was buried in Damascus. The Sirat Baybars, a folk tale which, allegedly, tells of his life, is still popular in the Arab-speaking world.

xxxxxAs we shall see, the Mamluk dynasty remained in power until the Ottoman occupation in 1517 (H8). Even after this date, however, the Mamluks retained their identity and continued to be influential in matters of state.

Mamluks: 14th century illustration of the Battle of Wadi al-Khazandar, from The History of the Tartars by the Armenian scholar Hetoum of Coricos, 1307, artist unknown – National Library of France, Paris. Map (Egypt): licensed under Creative Commons – althistory.wikia.com/wiki/File: H-mamluks.