xxxxxThe English economist Thomas Malthus is best known for his Essay on the Principle of Population, published in 1798, in which he predicted that the world’s growing population was quickly out-stripping food production. There were checks in place to reduce this growth, like war, famine and disease, but these were not sufficient to stop the slide into a miserable struggle for survival. Only measures like sexual abstinence and delay in marriage would stop the increase, and permit a rise in the living standards of the masses. Aimed at countering the optimistic views of utopian philosophers like William Godwin, this theory raised serious questions about the treatment of the poor. Malthus argued that wages should be kept low, and that charity work and poor laws should be abolished because they encouraged large families. The Essay was used by his fellow economist David Ricardo, and influenced the two 19th century English naturalists Wallace and Darwin in their development of the theory of the “survival of the fittest”. It also had an impact on the movement for birth control. 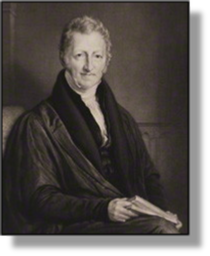 xxxxxThe English economist Thomas Malthus wrote two major books on economics, An Inquiry into the Nature and Progress of Rent of 1815, and Principles of Political Economy, a work which, produced five years later, introduced the concept of economic depression, and anticipated the work of the English economist John Maynard Keynes in the 1930s. However, it is his Essay on the Principle of Population, As It Affects the Future Improvement of Society, by which he is best known today.

xxxxxThis work, published in 1798 and revised in 1803, caused a stir both in the academic world and in society at large. Prompted by the population explosion that was accompanying the Industrial Revolution in the latter part of the 18th century, it argued with conviction that the world’s population was increasing at such an alarming rate that, given time, it would outstrip the resources by which it was sustained - such as food, land and water. This would result in widespread misery, with people struggling to survive. Malthus

accepted that there were existing “positive” checks on population growth, such as famine, disease and war, but held that these would need to be supplemented by moral restraint - “preventive” checks - such as sexual abstinence or the delaying of marriage. Only by such means would the increase be slowed down or reversed, thereby permitting a rise in the living standards of the masses.

xxxxxLater, this argument for population control had a marked influence on the thinking of two 19th century English naturalists, Alfred Russel Wallace and Charles Darwin. It gave Wallace the idea of the “survival of the fittest”, and, likewise, it strengthened Darwin’s theory that the extinction or survival of a species depended on the response made to environmental changes. And it also provided valuable propaganda for the pioneers of birth control, leading to the emergence of neo-Malthusianism, a movement which, supported in part by the social reformer Robert Owen, aimed at reducing the birth rate amongst the poor. 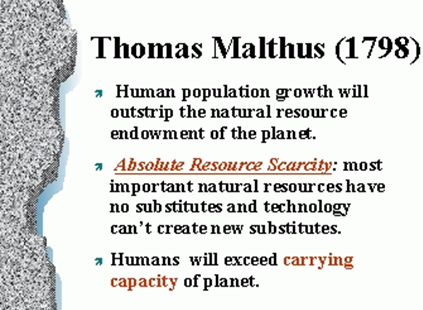 xxxxxIn his own day, however, the pessimistic theories advanced by Malthus, whilst influencing in particular his fellow economist David Ricardo, were bitterly opposed by those who, as advocates of the Enlightenment, believed passionately in the steady march of human progress. Indeed, among others, his Essay was aimed directly at the optimistic writings of philosophers such as William Godwin, who painted a glowing picture of man’s happy, utopian future once left to his own devices. And theoretical arguments aside, his Essay had a profound influence on current economic and social thinking. It justified a level of wages based on the minimum cost of subsistence, and it challenged the very existence of charity work and poor laws. Such measures, it argued, only encouraged the producing of large families, and this simply added to the problem. Workhouses might well be the answer, but these should be based on a harsh regime, and provided only for those in “severe distress”.

xxxxxMalthus was born into a well-to-do family near Dorking, Surrey. He studied theology, mathematics and philosophy at Cambridge University, and after taking a postgraduate degree, took holy orders in 1797. The following year he became a curate in the parish of Albury, Surrey, but in 1805 he was appointed professor of modern history and political economy at the East India Company’s college at Haileybury, Hertfordshire. He remained in this post for the rest of his life. He was elected member of the Royal Society in 1819, and two years later joined the Political Economy Club, whose members included his close friend David Ricardo, and the Scottish economist James Mill.