xxxxxThe Ancient Kingdom of Ghana, as we have seen, flourished in West Africa from the 800s, but began to break up following the invasion of the Almoravids in 1076 (W1). For a time the Susu people took over the remnants of the empire, but in 1235 one of the leaders of the Malinke tribe, Sundiata, over-threw Sumanguru, the Susu king, and set up the Mali Empire. His capital city Niani became an important centre on the trans-Saharan trade routes, and his generals began a period of expansion, notably towards the gold-producing lands in the south. As we shall see (1324 E2), the Mali empire was destined to become one of the most powerful and prosperous kingdoms in the western Sudan. 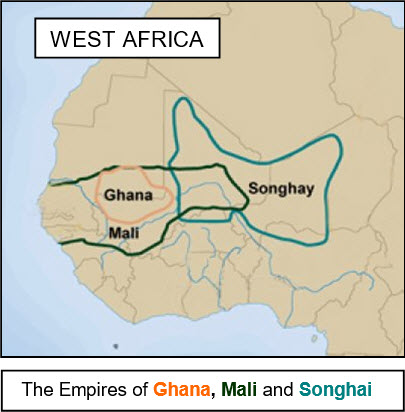 xxxxxAs we have seen, it was in 1076 (W1) that the Ancient Kingdom of Ghana (see map), which had flourished in West Africa from the 800s, was overrun by the Muslim Almoravids. Whilst the occupation only lasted for a few years, it was sufficient to seriously disrupt the trade upon which the empire so much depended. Neighbouring clans, once subject to and dependent on this powerful trading nation, now broke away and claimed independence.

xxxxxOne such clan, the Susu, under its ruler King Sumanguru, created a small empire by overrunning some of these small states. Then in 1203 Sumanguru occupied the capital of Ghana, Kumbi Saleh, intent upon reviving its fortunes as the centre of the lucrative trade routes that crossed the Sahara. His harsh rule, however, and his inability to maintain law and order worked against him. Soon after his occupation the traders abandoned Kumbi Saleh in favour of more stable trading centres, and his kingdom came under attack. 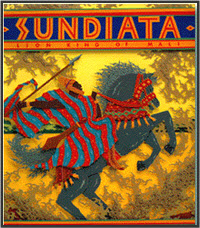 xxxxxOne of the peoples who revolted against the harsh rule of King Sumanguru were the Malinke, the inhabitants of the small state of Kangaba on the Upper Niger River. In about 1235 one of their leaders, Sundiata, won a decisive victory over Sumanguru at the Battle of Kirina, and took over his ailing kingdom. Within a few years Sundiata had consolidated his rule and formed what came to be known as the Mali Empire. In 1240 he razed Kumbi Saleh to the ground, thus destroying the last vestige of the ancient Kingdom of Ghana, and soon afterwards moved his capital to Niani. This new site was on the trade routes across the Sahara and soon became a major commercial centre in the Sudan. Meanwhile, his generals began to expand southwards towards the gold-producing lands of Bondu and Bambuk, north-west towards Diara, and northwards along the River Niger. 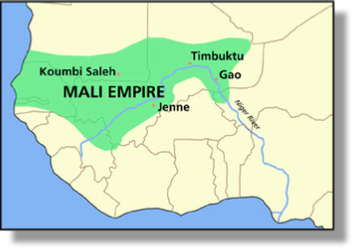 xxxxxWe shall see (1324 E2), that the Mali Empire, centred on the Upper Niger River, was destined to become the most powerful and prosperous of all the empires of the western Sudan. It reached the height of its power and influence in the reign of its leader Mansa Musa, (about 1307 to 1337) and by then covered an area similar to that once occupied by the Empire of Ghana. It was not finally destroyed until the latter part of the fifteenth century, when, in its turn, it gave way to the Songhai Empire (shown above).

xxxxxIncidentally, when Sumanguru, the leader of the Susu, overran the state of Kangaba at the beginning of the thirteenth century, he murdered all of Sundiata's brothers but, according to tradition, spared Sundiata himself because he was a sick child and thought to be near to death. For Sumanguru this proved a fatal decision!