xxxxxThe repressive regimes imposed upon Lombardy and Venetia by the Austrian leader von Metternich, following the Congress of Vienna in 1815, gave fresh impetus to the Risorgimento, the Italian movement for unification and independence. Nonetheless, revolts by the Carbonari and Giuseppe Mazzini’s Young Italy movement made little progress, and the revolts of 1848, though widespread, ended in failure despite the efforts made by the king of Sardinia-Piedmont, Charles Albert, and the Italian patriot Giuseppe Garibaldi. In the 1850s, however, the son of Charles Albert, Victor Emmanuel II, together with his able minister Count Cavour, made a secret alliance with Napoleon III of France, and when the Austrians attacked Piedmont in 1859 the French came to their aid. Within the year two major battles, those of Magenta and Solferino, had driven the Austrians out of Lombardy. After Solferino, Napoleon made peace with the Austrians, but by then many cities and areas across the peninsula, including Modena, Tuscany and the northern Papal States had rebelled against their rulers. As we shall see, unification was achieved in large measure by the end of 1860, due mainly to the substantial gains by Giuseppe Garibaldi in the south, and Cavour’s able leadership in the north. 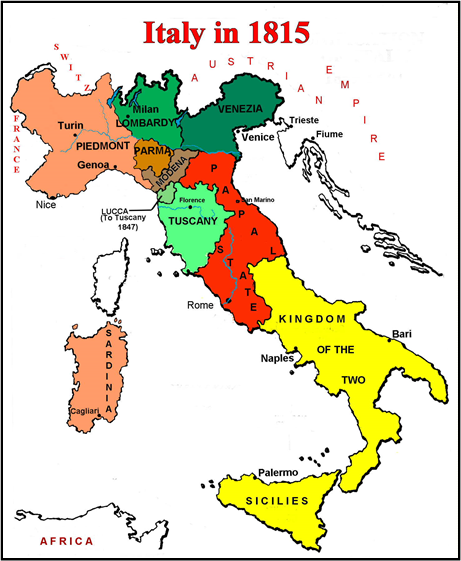 xxxxxThe restoration of the old European order by the Congress of Vienna in 1815 meant that Italy continued to be occupied by foreign troops and dominated by their despotic rulers. Not surprisingly, the repressive regimes imposed upon Lombardy and Venetia by the Austrian leader von Metternich, together with his attempts to expand further his country’s control over the whole of Italy, gave fresh impetus to the Risorgimento, the nationalist movement dedicated to the expulsion of foreigners and the unification of Italy. At first it made little headway. The secret organisation known as the Carbonari - originally formed to overthrow Napoleon’s seizure of Italy - carried out a series of revolts in the 1820s, but these were all unsuccessful, and the Young Italy movement, formed by the ardent republican Giuseppe Mazzini in 1831, fared little better, though it did provide the basis for a national movement.

xxxxxThe widespread rebellion which broke out across Italy in 1848, during Europe’s so-called “Year of Revolutions”, held out greater promise of

success, but, on the surface, it achieved nothing. As we have seen, the Austrians quickly crushed the infant republics set up in Venice, Milan and Tuscany, and by the Battle of Novara in March 1849 roundly defeated Sardinia-Piedmont, forcing its monarch, Charles Albert, to abdicate in favour of his son Victor Emmanuel II. Meanwhile, a democratic republic had been established in Rome, with Mazzini as one of the governing triumvirate. However, this was soon overthrown by the French - coming to the aid of the Pope -, though they first had to overcome some gallant resistance by the forces of the Italian patriot Giuseppe Garibaldi. 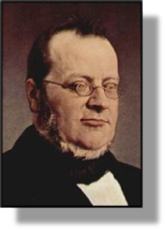 ver, but, in fact, a new champion was at hand. The task of liberating Italy, which had been taken up by Charles Albert of Sardinia-Piedmont, was willingly continued by his son, Victor Emmanuel II (1820-1878). Together with his able chief minister Conte Camillo Benso di Cavour (1810-1861) (illustrated), he sought the complete expulsion of the Austrians from the Italian peninsula under the banner “Unity, Independence and Victor Emmanuel”. With this in mind, Cavour made a secret agreement with Napoleon III of France, gaining his military support in the event of an Austrian attack upon Piedmont. When, on a trumped-up excuse, this attack took place in April 1859, Napoleon kept his promise, and the Austrians were faced with an enemy appreciably more powerful than they had bargained for. 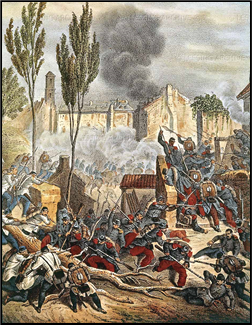 xxxxxThe war that followed did not last long and was decided, in effect, by two major battles. Atxthe opening phase of the Battle of Magenta, fought some 15 miles west of Milan at the beginning of June, the Piedmontese were obliged to fight alone. They managed to repulse two early attacks, however, and by the time the French arrived, the Austrians had taken up a defensive position across the Ticino River. A number of frontal attacks upon the Austrian line proved futile and costly, but the French commander, Marshal Marie MacMahon, then took charge of a large force and, crossing the river well north of the battlefield, descended upon the enemy’s flank. The Austrians were taken completely by surprise and broke up in disarray, leaving over 9,000 dead or injured. 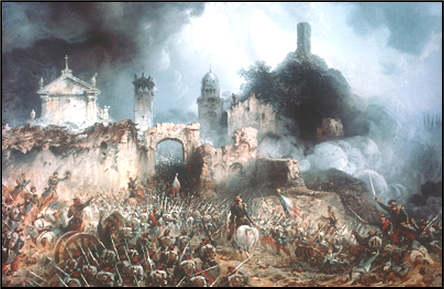 xxxxxThe Austrian army, numbering about 120,000 men, then retreated eastward, closely followed by the Franco-Piedmontese combined force, led by Napoleon III and Victor Emmanuel. Contact between pursued and pursuer was lost for a time, but on June 24 the two armies suddenly came upon each other near the town of Solferino, five miles south of Lake Garda. As a result, the Battle of Solferino developed into a confused, wide-ranging conflict of savage fighting in which casualties were heavy on both sides. It was not until late afternoon that the French managed to break through the mass of the Austrian army, commanded by the Emperor himself, Franz Joseph, and claim a close but bloody victory. Both sides lost some 14,000 men killed and wounded in a battle which raged until nightfall.

xxxxxFollowing this victory at Solferino, Napoleon III, concerned that Piedmont was becoming too powerful, and anxious in case Prussia might attack France across the Rhine, made a truce with Austria and withdrew from the contest. Byxthe Treaty of Zurich in the November, most of Lombardy was given over to Sardinia-Piedmont, but an attempt was made to restore to power the Dukes of Parma, Modena and Tuscany. By then, however, much of Lombardy had already fallen to the Piedmontese, and many cities and areas across Italy, including Modena, Tuscany and the northern Papal States, had rebelled against their rulers and joined the quest for Italian unity. As we shall see, this was achieved in large measure by the end of 1860, due mainly to the dogged determination of the patriot Giuseppe Garibaldi in the south, and Cavour’s able leadership in the north. 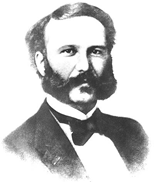 xxxxxIncidentally, thexBattle of Solferino has a more important claim to fame. A Swiss humanitarian named Jean Henri Dunant (1828-1910) (illustrated) helped to tend the wounded after the battle, and in his Un Souvenir de Solferino, published in 1862, he proposed the establishment of an international organisation to care for those wounded in battle, regardless of race or creed. This idea was adopted and given the name of The Red Cross during the First Geneva Convention, held in 1864 (Vb). Today, the movement, which is known as The Red Crescent in Muslim countries, is concerned with the prevention and relief of human suffering worldwide. ……

xxxxx……  Count Cavour, the prime minister of Sardinia-Piedmont, was the man responsible for taking his country into the Crimean War on the side of France and Great Britain. This gave his nation a certain amount of international prestige and singled it out as the country which was best able to champion the cause of Italian independence. ……

xxxxx……  The crimson Magenta dye, discovered soon after the Battle of Magenta, was named in honour of the victory, and the battle is commemorated somewhat gruesomely by an ossuary containing the bones of some 9,000 of those who died in the conflict. ……

xxxxx……  The expulsion of Austria from Lombardy was a serious blow to Habsburg prestige and pride and, as we shall see, was to be followed only a few years later by their disastrous defeat at the hands of the Prussians in the Austro-Prussian War, the so-called Seven Weeks’ War of 1866 (Vb). This in its turn was to lead to the creation of the Austria-Hungary dual monarchy the following year.