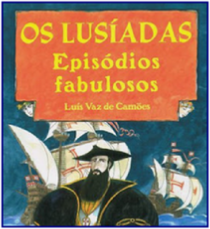 sea captain Lourenco de Almeida, son of the first viceroy of Portuguese India, led an expedition to Ceylon (now called Sri Lanka) in 1505, and founded a settlement at Colombo in order to increase trade in the area. This brought him into direct conflict with Arab and Egyptian traders and led to an all-out war. He defeated an Arab naval force off the west coast of India in 1506, but in 1508, having seen off a fleet from Malacca, he was surrounded by an Egyptian armada off Chaul (on the west coast of India) and his ships were destroyed. Almeida himself fought bravely, but died of wounds received in the battle.

xxxxxIn 1510 the Portuguese, led by his father Francisco de Almeida, a former soldier, put to flight a combined Turkish and Muslim fleet off the port of Diu, and finally re-established their influence and control over sea routes across the Indian Ocean.

xxxxxIncidentally, the exploits of Lourenco de Almeida and the gallantry he showed in his last battle - the Battle of Chaul - are recounted and doubtless exaggerated in an epic poem written by the sixteenth century Portuguese 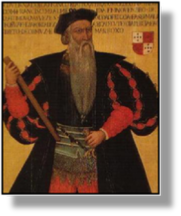 poet Luis de Camoens. The title of the poem, Os Lusiadas (The Lusiads) refers to Lusitania, the name given to Portugal and the surrounding area by the Romans. ……

xxxxx…… Two years later, in 1510, the Portuguese soldier Afonso de Albuquerque (1462-1515) (illustrated) captured the valuable island of Goa, off the west coast of India, and a year later occupied Melake on the Malayan peninsula. These possessions further extended Portuguese trade in the Far East.

xxxxxThe Portuguese sea captain Lourenco de Almeida founded a trading settlement at Colombo, Ceylon, in 1505. This led to conflict with Arab and Egyptian traders. He gained a victory against the Arabs off the west coast of India, but in 1508 was surrounded by an Egyptian armada off Chaul. His ships were destroyed and he was mortally wounded. Two years later, however, an expedition led by his father, Francisco, defeated a Turkish-Muslim fleet, and kept the sea routes to India open for the Portuguese.