xxxxxAbandoning a scheme to create an empire based on the West Indian island of Hispaniola, Napoleon - needing money for the coming war with Great Britain - sold Louisiana to the United States in April 1803. The Americans paid some $15 million for this vast area (about three cents an acre), which stretched from the Mississippi River to the Rocky Mountains. The offer to purchase was snapped up by US president, Thomas Jefferson, who had long been anxious to open the west to American settlement. The boundaries of this new region involved the British and Spanish and took some years to resolve. The border with Canada was agreed in 1818, and Spain ceded Florida to the United States a year later, but the frontier with Spanish-held Mexico was not fixed until the Mexican War of 1846 (Va). 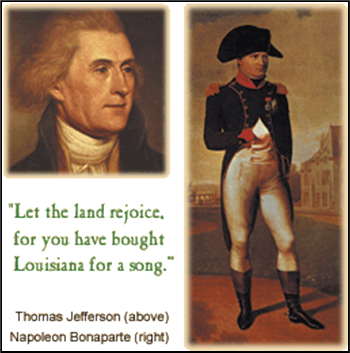 xxxxxIn what was clearly the largest sale of the century (Alaska being the second), the United States purchased the Louisiana Territory from France in April 1803. Some 820,000 square miles in size, this vast region extended from the Mississippi River in the east to the Rocky Mountains in the west, and was claimed for France by the French explorer La Salle in 1682. The price was in the region of $15 million (less than 3 cents an acre), and for this modest sum the United States was virtually doubled in size.

xxxxxBack in 1762, during the Seven Years’ War, France had ceded this huge area to Spain, but had regained it by the secret Treaty of San Ildefonso in 1800. Napoleon, anxious as ever to give France a place in the tropical sun, conjured up a French empire based on the Caribbean island of Hispaniola, and saw the Mississippi Valley as playing an important part in support of this scheme. As we have seen, however, his hopes were dashed in 1802 when he faced a rebellion in Haiti (part of the island), led by the black slave leader Toussaint L’Ouverture in 1791 (G3b). A large army was sent to restore order and met with some success, but many men were lost, mainly from yellow fever. As a result Napoleon decided to abandon the project and, as a consequence, saw little value in holding on to Louisiana. 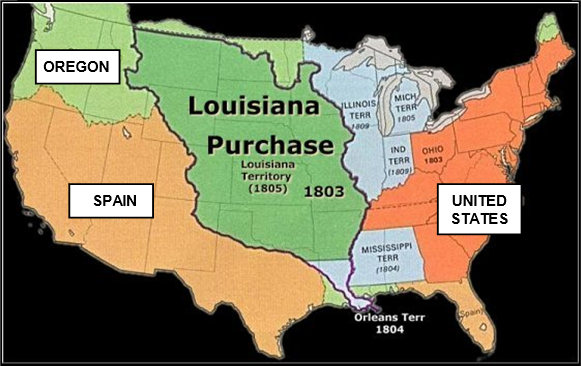 xxxxxIndeed, on the contrary, Napoleon saw much value in not holding on to this vast region in the middle of nowhere. Firstly, he would have no need to defend it against a likely British attack. Secondly, being about to embark upon a costly war with Britain, and hopeful of extending French authority even further over the continent of Europe, he could do with the ready cash. In April 1803 he offered to sell the entire region to the United States. For their part, the Americans had for long been deeply concerned about French designs on this area. Delegates had been sent to Paris in 1802 seeking, if nothing else, the purchase of specified areas, or a guarantee of free navigation on the River Mississippi. So they were very surprised and delighted when, out of the blue, they were offered the chance of buying the entire territory on a “take it all or leave it all” basis. They snapped the offer up, and a jubilant President Thomas Jefferson, concerned that their action might be unconstitutional, made the acquisition legal by having it ratified as a “treaty” by the Senate. Louisiana was officially handed over to the United States in December 1803. At a stroke, the free navigation of the Mississippi was secured, and a vast region in the west was opened for settlement. 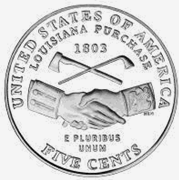 xxxxxThe wording of the Treaty was somewhat vague as regards boundaries, and disputes with Britain and Spain took some years to resolve. However, the northern boundary with Canada was agreed by an Anglo-American convention in 1818, - with the 49th parallel defining most of the border - andxa year later Spain ceded Florida to the United States. The cession of Florida followed the First Seminole War (1817-18) between the US government and the Seminoles (“runaways”) - Creek Indians who had settled in the peninsula. The Americans, in attacking the Indians, occupied Spanish territory in Florida, and this put pressure on Spain to give up its holdings. Further west, the border with Spanish-held Mexico was to be drastically redrawn, as we shall see, by the Mexican War of 1846 (Va).

xxxxxThomas Jefferson (1743-1826), American President at the time of the “Louisiana Purchase”, must take credit for ensuring that this transaction was quickly passed by the Senate. It gave his country greater security, and a vast new area for settlement. Today, he is remembered above all as the author of the Declaration of Independence of July 1776. He served many years on the Virginian legislature and in Congress, and became known for his support of liberal measures, such as penal reform, public education, religious toleration and the abolition of slavery. He served as secretary of state for George Washington, vice-president to John Adams, and president from 1801 to 1809. 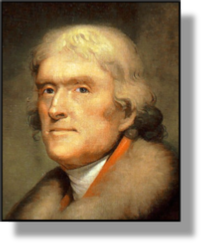 xxxxxThe Louisiana Purchase was the outstanding achievement of the presidency of the American statesman Thomas Jefferson (1743-1826). He served two terms, from 1801 to 1809, and was the founder of the Democratic Republican Party. He had made several attempts to come to terms with the French over this vast area in the west - concerned especially over rights of navigation on the River Mississippi - but they had met with no success. When the offer to purchase the entire region came up in April 1803, therefore, he literally jumped at the chance. Having no powers by the constitution to acquire land in this way, he pushed the measure through the Senate by making it a lawful “treaty”. He saw that the removal of a major foreign power from the American continent - especially a militant one like France - would not only add to the security of the United States, but also open up a huge interior for settlement.

xxxxxIn his second term, being anxious to keep the nation at peace, he managed to steer a policy of neutrality during the Napoleonic Wars, despite restrictions placed on trade by both the French and the British. However, his Embargo Act of 1807, which virtually prohibited all exports and most imports, caused economic distress and opened him up to charges of weakness. His successor James Madison, coming under the influence of the “war hawks”, took a stronger stand and, to redeem national honour, persuaded a divided Congress to declare war on Britain in June 1812. The conflict, the War of 1812, was to last for nearly three years. 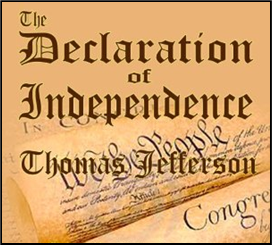 xxxxxBut Jefferson’s international reputation was established long before becoming president in 1801. Born into a wealthy family in Virginia, and trained as a lawyer, he was Virginia’s delegate to the Continental Congress in 1775 and 1776. It was at this time that, as the leading member of a committee which included Benjamin Franklin and John Adams, he was assigned the task of drafting the Declaration of Independence. As noted earlier, he did so willingly, and later declared that he used “neither book nor pamphlet” in the writing of it. After amendment by both the committee and Congress it was made public on the 4th July 1776.

xxxxxHe then served in Virginia’s House of Delegates, and became wartime governor of the state from 1779 to 1781 before returning to Congress. During these years he proposed a wide range of liberal measures, including a revision of the penal code, a bill for religious freedom, public education, and the banning of slavery in any western territory after 1800. Such advanced ideas met with limited success. In 1785 he was appointed American minister to Paris, but during his four years there he continued to advise on the proposals being hammered out for a Constitutional Convention. On his return to America he was appointed secretary of state under George Washington, but after constant disputes with the Secretary of the Treasury - mostly over monetary reform - he resigned in 1793, returning as vice-president to John Adams four years later. 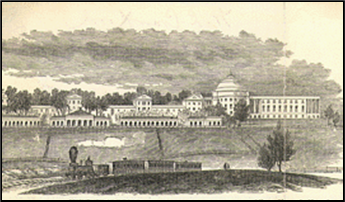 xxxxxJefferson was a charming, liberal-minded man with an insatiable curiosity. Despite his long years in politics, he was interested in painting, music, architecture and the natural sciences. As secretary of state to George Washington, he played a prominent role in the establishment of the capital city on the banks of the Potomac River (now Washington DC), and he was the first president to be inaugurated there. In 1809 he founded the University of Virginia at Charlottesville (illustrated), taking the leading part in its design and construction. It was opened in 1825, and the following year he died at his beloved home at Monticello, Virginia, exactly 50 years after the Declaration of Independence.

xxxxxIncidentally, Jefferson asked that on his tomb stone only the following words be inscribed: Here was buried Thomas Jefferson, Author of the Declaration of Independence, of the Statue of Virginia for Religious Freedom, and Father of the University of Virginia. This neatly summed up his contribution in the field of politics, religion and education. ……

xxxxx…… When he was American minister to Paris in the late 1780s, Jefferson met George III on one occasion and recorded that the king was rude to him. Later, in his autobiography, he wrote of “the ulcerations in the narrow mind of that mulish being”. ……

xxxxx…… It was Jefferson who organised the successful Lewis-Clerk expedition to the Pacific coast and back. After careful preparations, beginning in 1803, the expedition set out in May 1804 and, as we shall see, returned to St. Louis, Missouri in September 1806.