xxxxxAs we have seen, the Lollards were trained followers of the church reformer John Wycliffe (1382 R2). Formed in the early 1380s, their number grew at an alarming rate over the next twenty years, aided by the circulation of the first English bible. Their attack on the wealth and power of the church, and their support for a return to a simple Christian life based on the scriptures, was well received in every level of society, including the nobility and the lower clergy. In 1401, however, spurred on by the then Archbishop of Canterbury, Henry agreed to the passing of the De Heretico Comburendo, sanctioning the burning of heretics - with Lollards clearly in mind. Many were burnt at the stake, and the movement was forced underground. As we shall see, it did break out in revolt in 1417 (H5), but for the most part it lay bubbling beneath the surface until the coming of the Reformation.

xxxxxThe Lollards, as we have seen, were followers of the church reformer John Wycliffe (1382 R2) (here illustrated). The first group was formed at Oxford under the leadership of Nicholas of Hereford in the early 1380s. Over the next twenty years this movement, spearheaded by a band of specially instructed preachers, and greatly promoted by the circulation of the first English bible, grew at an alarming rate. Support came not only from a large section of the common people, but also from every level of society, - the gentry, the merchant classes, the nobility, the crown service, the royal household and even the lower clergy.

xxxxxIn accordance with the views of their founder, the movement was highly critical of the power and the wealth of the church. It argued that church doctrine on such matters as confession, transubstantiation, and the use of images in worship had no foundation in scripture. Indeed the papacy itself had no spiritual justification, and the Great Schism was but a prelude to its demise. What was needed was for the clergy to return to the simple life of service and devotion, and for the Christian to lead his life strictly in accordance with the scriptures - a life, incidentally, in which war and capital punishment had no place. These articles of faith, contained in what the Lollards called the Twelve Conclusions, were drawn up and presented to parliament in 1395. 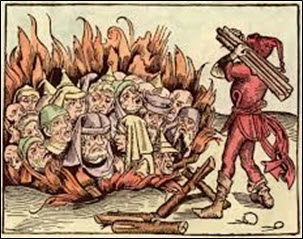 xxxxxWith the accession of Henry IV in 1399, however, the movement came under severe attack. A close friend of Thomas Arundel, the Archbishop of Canterbury, Henry agreed to the statute De Heretico Comburendo, giving sanction to the burning of heretics. This was passed in parliament in 1401, and Arundel then wasted no time in putting it into effect. The first to go to the stake was William Sawtrey, a leading Lollard, and then others followed. As a result, the movement, though very much alive, was forced underground. As we shall see, it did break out into open revolt in 1417 (H5), but for the most part it lay bubbling beneath the surface, a ready nucleus of support for the Reformation that was to come.

xxxxxIncidentally, the name Lollard comes from the Dutch word lollaert meaning “mumbler”, and was used to describe a person who pretended to be pious but, in fact, held heretical beliefs.