xxxxxThe English philosopher and political theorist John Locke believed that all knowledge was acquired through the senses. Thus his Essay concerning Human Understanding, published in 1690, championed empiricism, the belief that experience was the only source of knowledge, made up of external sensations and internal reflection based on evidence provided by the senses. In the field of politics, his Two Treatises on Civil Government attacked the divine right of kings, advocated religious freedom, and claimed that government had to be based on popular consent. In contrast to Thomas Hobbes, he argued that the power of governments could be limited. Such theories had an immense influence, and were used in support of both the American and French Revolutions. His many friends included the scientists Robert Boyle and Isaac Newton, and among those influenced by his thinking were David Hume, Voltaire, Montesquieu, Thomas Paine and Thomas Jefferson. His other works included Letters on Toleration and Some Thoughts Concerning Education. 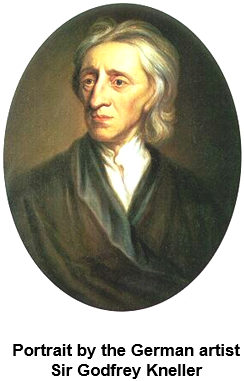 xxxxxThe English philosopher and political theorist John Locke believed that, at birth, the mind was totally void of information - a "white paper" as he put it - and that all knowledge was therefore acquired through the senses. Thus his Essay concerning Human Understanding, published in 1690 but based on much earlier research, championed empiricism, the belief that experience was the only source of knowledge. This knowledge was made up of ideas, and these ideas came from two "fountains" - sensation, related to the external world, and internal reflection on the evidence provided by the senses.

xxxxxBut of far greater significance at this time was his Two Treatises on Civil Government, dealing with the origin and purpose of the "state". Produced in the wake of the Glorious Revolution, they attacked the theory of the divine right of kings, advocated religious freedom, and laid down the fundamental principles of Whig philosophy, claiming that governments derived their right to govern from popular consent. If they failed to honour their "social contract" with the people by restricting their basic rights to life, liberty and property, then they could be and should be overthrown. Furthermore, unlike the views put forward by his fellow countryman Thomas Hobbes, Locke took a more optimistic view of society. He argued that the power of governments could be limited by a series of "checks and balances", and that individual freedom and the pursuit of happiness, contained within a civil framework, would lead to the common good. 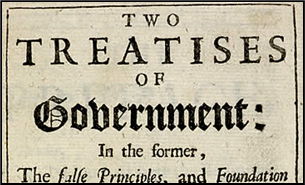 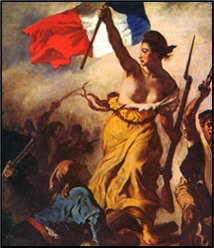 xxxxxSuch theories had an immense influence, particularly in England, France and North America. Indeed, his political philosophy was used in support of both the American and French Revolutions, and many of his beliefs - including the assertions that all persons are born equal and possess "inalienable rights" - were later incorporated in the constitution of the United States. It must be noted that Locke was not a democrat in the modern sense of the word. He was in favour of a limited franchise, and his ideas were primarily aimed at defending the interests of the landlord and moneyed classes, but, as an enemy of absolute monarchy and the totalitarian state, his ideas gave enormous impetus to the development of liberal democracy.

xxxxxLocke was born in the Somerset village of Wrington, but spent his childhood in Pensford, just south of Bristol. A member of an Anglican family, he attended Westminster School before going up to Christ Church, Oxford, to study Greek and philosophy and then medicine and science. He then lectured 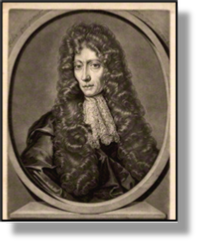 at the university for some four years, and it was at this time that he became a close friend of the English scientist Robert Boyle (illustrated). In 1667 he moved to London and became physician and advisor to the Earl of Shaftesbury. Through this close association, he became involved in politics, and secured a number of minor government appointments. It was while holding one of these posts that he helped draft a constitution for the new colony of Carolina, though it was never put into operation. In 1675, after Shaftesbury had fallen out of favour, he was obliged to take refuge in France, and it was here that he became familiar with the theories of the French philosopher René Descartes.

xxxxxHe returned four years later but, following the arrest of Shaftesbury, he again left the country in 1683, remaining in Holland until the Glorious Revolution of 1688 - an event justified by his own teachings. He came back with the party which escorted the new queen, Mary, Princess of Orange, to England, and was appointed a commissioner at the Board of Trade. In 1691, however, due to ill-health, he retired to Oates in Essex. By this time he had become a well-known and influential member of society, and numbered among his circle of friends prominent members of the government and a number of outstanding scholars, including Sir Isaac Newton. A man noted for his piety, prudence and wisdom, he died in October 1704 and was buried in the parish church of High Laver.

xxxxxLocke was an outstanding thinker of great intellect and wide interest. He wrote many works on philosophy, politics, economics and theology. Notable among these were his influential Letters on Toleration of 1689, The Reasonableness of Christianity, published in 1695, and his Some Thoughts Concerning Education, a treatise in which he emphasised the importance of travel and favoured a hands-on approach to the accumulation of knowledge rather than a passive reliance upon book learning. As we shall see, his writings had a particularly profound influence on modern philosophy and political science. Among those prominent writers who adopted many of his basic ideas were the Scotsman David Hume, the Frenchmen Voltaire and Montesquieu, the Anglo-American Thomas Paine, and the American statesman Thomas Jefferson. 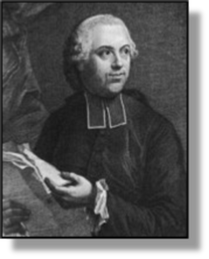 xxxxxAnd worthy of mention here is one of Locke’s firm disciples, the French psychologist and philosopher Étienne Bonnet de Condillac (1715-1780). An acquaintance of the intellectuals Diderot and Rousseau, he was a key figure in the coming age of French Enlightenment. In his early works, such as his Essay On the Origin of Human Knowledge of 1746, and his Treatise on Systems three years later, he did much in his time to promote Locke’s basic principles in France. 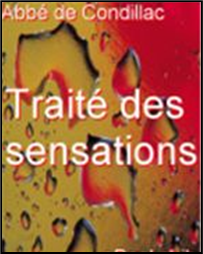 Original thought came in 1754, however, with his Treatise on Sensations and its sequel Treatise on Animals. In these works he significantly extended Locke’s concept of the origin of human knowledge, claiming that all of man’s mental activity and faculties - not simply ideas - sprang from the various developments of sensation, painful or pleasant. His Course of Studies, a 13 volume educational work completed in 1773, covered a wide range of topics, including the history of man and empires, and the art of writing, reasoning and thinking. In 1776 he turned his attention to economic matters in his Commerce and the Government.

xxxxxThexyear 1749, three years after Condillac’s Essay on the Origin of Human Knowledge, saw the publication of Observations on Man, his Frame, his Duty and his Expectations, a scholarly integrated theory of human nature by the English doctor and philosopher David Hartley (1705-1757). In attempting to explain how thought processes occur, his claim that man’s mind was a legitimate subject for scientific inquiry marked him out as one of the founding fathers of the modern science of psychology.