xxxxxAs we have seen, Portugal gained its independence under Afonso Henriques in 1139 (ST). By his death in 1185 he had firmly established the new nation. Later Afonso III expelled the Moors from the area south of the River Tagus, and by 1386 (R2), John I, following a series of wars, had defeated the Castilians and made an alliance with England by the Treaty of Windsor. Under Henry the Navigator, and later John II, Portuguese navigators opened the sea route to the Far East, settled in Brazil, and pioneered the slave trade. But with the end of the Aziv dynasty in 1580 (L1), the Spanish seized the throne, and there followed the “Sixty Years’ Captivity”. Eventually in 1640 John, Duke of Braganca, led a successful national revolt, and was crowned king as John IV. However, his throne was in doubt until, by the marriage of his daughter, Catherine of Braganca, to King Charles II, he secured English help. In 1665 an Anglo-Portuguese army defeated the Spanish at the battles of Montes Claros and Villaviciosa, and in 1668, by the Treaty of Lisbon, Spain finally recognised the independence of their neighbour, Portugal.

xxxxxAs we have seen, Portugal became an independent state in the 12th century. It was in 1139 (ST) that Afonso Henriques, having defeated his mother at the battle of Sao Mamede and seized power, secured the independence of Portugal from the neighbouring kingdom of Leon, and assumed the title of King. By the time of his death in 1185, he had firmly established the new nation state. It was left to Afonso III to expel the Moors from the areas south of the River Tagus, a task achieved by 1250. There followed a series of wars with the kingdom of Castile, but in 1385 John I defeated the Castilians at the Battle of Aljubarrota and, forming an alliance with England by the Treaty of Windsor (1386 R2), finally secured a period of peace.

xxxxxThis hard-won period of peace enabled his son, Henry the Navigator, and later John II, to embark on a programme of exploration. Led by Portuguese navigators like Diogo Cao, Bartolomeu Diaz, Vasco da Gama, and Pedro Cabral, this eventually took the Portuguese along the west and east coasts of Africa, opened the sea route to India and the East Indies, established settlements in the vast land of Brazil, and pioneered the slave trade from Africa to the New World. 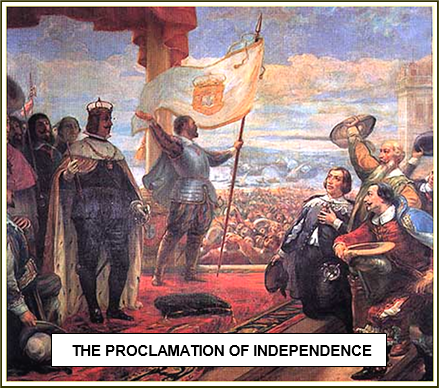 xxxxxWith the death of Henry the Cardinal King in 1580 (L1), however, the Aviz dynasty came to an end, and no less than seven claimants disputed the succession. With Philip II of Spain as one of these claimants, the outcome was hardly in doubt. In August, Spanish forces under the command of the ruthless Duke of Alva invaded Portugal and defeated the supporters of Don Antonio at the Battle of Alcantara near Lisbon. Philip II was proclaimed king (as Philip I) and, at a stroke, Spain doubled her colonial empire, and gained valuable harbours along the Atlantic seaboard.

xxxxxThere followed what came to be known as the "Sixty Years' Captivity". Under Philip's successors, Portugal became little more than a Spanish province. The lucrative trade with the East Indies was lost to the Dutch and English, parts of Brazil fell into Dutch hands, and the country was heavily taxed to help pay for Spain's defence of the Netherlands and its military designs upon England. In 1589 a large English expedition led by Sir Francis Drake and Sir John Norris attempted to place Dona Antonio on the Portuguese throne, but it failed to take Lisbon and had to be abandoned.

xxxxxWidespread discontent against Spanish rule finally erupted, however, in 1634 and 1637. These uprisings proved unsuccessful, but in 1640, taking advantage of Spain's preoccupation with its war against France and a serious revolt in Catalonia, John, Duke of Braganca, led a national revolt. With the aid of the English, the Spanish garrisons were driven out, and Braganca - a distant relative of John III, a claimant to the throne in 1580 - was crowned as John IV in December of that year. 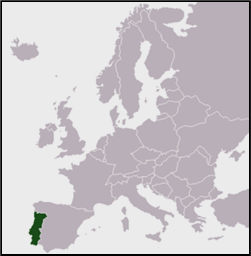 xxxxxBut the future of new nation was far from certain. Faced with a Spanish invasion, John turned to England for support. He made a treaty with Charles I in 1642, but this proved of little value following the outbreak of the English Civil War. Two years later the Portuguese managed to defeat a Spanish force at the battle of Montijo, but feared further attacks. In 1654 an understanding was reached with the Commonwealth whereby the English gave aid in return for trade concessions, and this was followed by an alliance with Ch 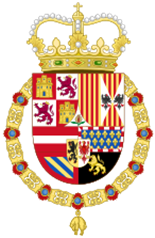 arles II, a year after his restoration. Then in 1662 came the marriage of Charles II to King John's daughter, Catherine of Braganca. In exchange for a large dowry and the acquisition of Tangier and Bombay, England provided arms and men to ward off the Spanish attack. Inx1665 an Anglo-Portuguese force, led by the German soldier von Schonberg, defeated the Spanish army, first at Montes Claros and then at Villaviciosa, and these defeats brought the Spanish to the negotiating table. At the Treaty of Lisbon in February 1668 Spain finally recognised the independence of Portugal (illustrated above). It had not been an easy ride!