xxxxxA Treatise on Scurvy, written by the Scottish physician James Lind in 1754, provided the long-awaited breakthrough in the treatment of this deadly disease. His remedy - the eating of citrus fruit to provide the necessary Vitamin C - had been worked out by the Dutch some two hundred years earlier, but had never been officially recognized. The Royal Navy did not act upon this advice until 1795, but when it did so, the disease vanished "as if by magic". Since the time of the Crusades - and doubtless earlier - thousands of seamen had died of scurvy while taking part in long voyages. Indeed some expeditions had been forced to abandon or destroy ships because the loss of life had been so great. And in time of war, more men died of scurvy than from enemy action. Lind wrote two other medical works of importance whilst in practice: On the Most Effectual Means of Preserving the Health of Seamen - in which he stressed the importance of basic hygiene to avoid dysentery and typhus - and An Essay on Diseases Incidental to Europeans in Hot Climates. 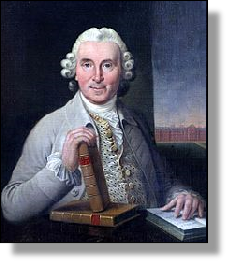 xxxxxIt was in 1754 that the former Scottish naval surgeon James Lind published his major work A Treatise on Scurvy. He followed this up three years later with his On the Most Effectual Means of Preserving the Health of Seamen. To the seafaring community these works proved monumental in their importance and effect, and rightly earned for him the title "founder of naval hygiene in England". The value he placed on the juices of oranges, lemons and limes in the diet of long-distance seamen had actually been discovered nearly two hundred years earlier by the Dutch, but the significance of the discovery had never been fully appreciated. Nor, indeed, were Lind's own findings put to good use for some forty years. Itxwas not until 1795, in fact, following the publication of a work by the Scottish physician Gilbert Blane ten years earlier (Observations on the Diseases of Seamen), that the Royal Navy recognized the importance of this diet and adopted it throughout the service.

xxxxxIt did not come a moment too soon. The disease known as scurvy had been the scourge of seamen for centuries past, growing ever more serious as voyages became longer - such as the medieval crusades. When, for example, Vasco de Gama made his historic journey to India in the 1490s, he had to abandon one of his ships because so many of his men had died from the disease. And this colossal loss of life through scurvy - caused by the lack of vitamin C - was the rule, not the exception. We have 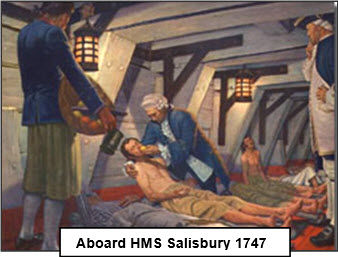 seen in this very reign (1728), how the Danish seaman Vitus Bering lost more than half his crew due to scurvy on his fateful second expedition to the Arctic in 1741. So serious did his position become that he too was forced to abandon his ship. And it is estimated that, in time of war, more seamen died of this disease than were killed by enemy action.

xxxxxIt was as a long-serving physician at the Royal naval hospital at Haslar, Gosport, that Lind dealt first hand with thousands of cases of scurvy, dysentery and typhus, caused by dietary deficiency or the appalling squalor of life below decks. This work experience also prompted him to suggest the provision of delousing on board ships, the means of distilling seawater for drinking purposes, and the need for a floating hospital in the tropics. His concern about the health hazards involved in serving in tropical areas led to his writing An Essay on Diseases Incidental to Europeans in Hot Climates, published in 1768. The painting above shows him treating a sailor on board HMS Salisbury in 1747.

xxxxxLate though it was in coming, by the end of the century scurvy had been eliminated in the British navy, disappearing, as one sailor put it, "as if by magic". The English seaman Captain James Cook paved the way for this development by proving the worth of citrus fruit on his voyages to the South Seas in the 1770s. Limes were the fruit routinely supplied, and it is for this reason that the English sailor is sometimes referred to as a "Limey".

xxxxxIncidentally, the disease scurvy - probably so named because of the scabs it produced - caused a progressively weakening of the entire body, beginning with the bleeding of gums and patches beneath the skin, the loosening of teeth, the swelling of joints and lower limbs, and the onset of anaemia. In most cases it proved fatal.

Lind: by the Scottish artist Sir George Chalmers (c1720-1791), date unknown – James Lind Library, Royal College of Physicians, Edinburgh. HMS Salisbury: by the American illustrator Robert A. Thom (1915-1979) – contained in A History of Medicine in Pictures, published by Parke, Davis & Co., in 1960. Cover: portrait based on an engraving by the English artist William Henry Mote (1803-1871), c1850, after a portrait by the English painter Sir Joshua Reynolds (1723-1792). Pringle: date and artist unknown.

xxxxxThe eminent Scottish physician John Pringle (1707-1782) did for the army what Lind was doing for the navy at this time. After serving in the War of the Austrian Succession, he wrote his Observations on the Diseases of the Army, published in 1752. This work dealt with typhus and dysentery, and emphasized the importance of basic hygiene. He also recommended that military hospitals should be immune from attack during a conflict, an idea which was to play a part in the establishment of the Red Cross in 1864. Pringle was created a baronet in 1766, and went on to become a physician to King George III eight years later. 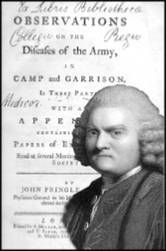 xxxxxAround this same time, a fellow Scotsman and physician called John Pringle (1707-1782) was also making recommendations for healthier and more humane conditions for men serving in the army. A pupil of the Dutch physician Hermann Boerhaave, he served for ten years as professor of moral philosophy at the University of Edinburgh, and it was during this time that he took part in the War of the Austrian Succession, serving as physician general to the British forces fighting in the Low Countries.

xxxxxFrom this experience he wrote his Observations on the Diseases of the Army, published in 1752. In this work he emphasized the importance of hygiene and good sanitation, defined the symptoms of typhus, and identified the various forms of dysentery. He also put forward the advanced idea that military hospitals should be immune from attack during a conflict, a suggestion that played a part in the establishment of the Red Cross in 1864 - though 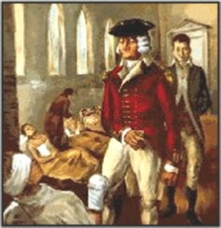 not before many other wars had added weight to the proposal. For such work in the service of the army he is often regarded as the founder of modern military medicine. In 1749 he settled in London and became physician to the Duke of Cumberland. He was created a baronet in 1766, and appointed physician to King George III in 1774.

xxxxxIncidentally, we are told that it was Pringle who coined the term "influenza". It is possible that the illness was so named because it was thought that it was caused by a peculiar "influence" in the atmosphere.