xxxxxThe Limbourg Brothers of Nijmegen - Paul, Herman and Jean - were trained as goldsmiths, and as from 1404 were employed at the court of the Duc de Berry in the city of Bourges, central France. In addition to general restoration work, they worked on an illuminated Book of Hours - a prayer book for daily devotions - and completed it in 1408. Then five years later, at the request of the Duke, an art connoisseur who owned a vast range of art treasures, they embarked on a more elaborate work, Les Très Riches Heures du Duc de Berry (1413). Beautifully illustrated and rich in colour, it contained not only the prayers and sacred imagery of the Church, but, in addition, it recorded, by means of a magnificent Calendar, the life of the Duke’s court and estates for each month of the year. In 1416, when the book was almost finished, all three brothers died of the plague. It was completed some 70 years later by the Bourges miniaturist Jean Colombe, and is known today as “the king of illuminated manuscripts”.

xxxxxThe Limbourg Brothers, Paul, Herman and Jean, were born in Nijmegen - an old Dutch city on the River Waal - towards the end of the 14th century. Their father was a local wood sculptor, and their mother’s brother, Jean Malouel, worked at the court of the Duke of Guelders, painting shields and heraldic devices. All three brothers were trained as goldsmiths - Jean and Herman as apprentices in Paris - and in 1404 all gained employment at the court of the Duc de Berry, the third son of John the Good, the King of France from 1350 to 1364. As a feudal lord, the Duke ruled over much of central and southern France, and, as an art connoisseur, he owned a vast range of art treasures, including a magnificent collection of books and illuminated manuscripts. These were all housed in a dozen or more châteaux, palaces and stately homes scattered across his domains. 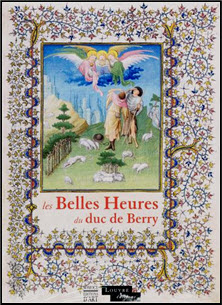 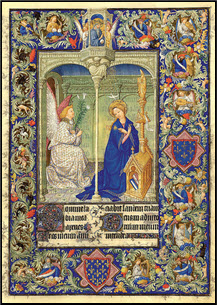 xxxxxThe three brothers worked in the city of Bourges, the Duke’s capital city, mainly employed on restoring art works, providing murals for various rooms within the château, and producing altarpieces and memorials for his chapels. In about 1405, however, all three began work on their first masterpiece, Les Belles Heures. This was an illustrated Book of Hours - a prayer book, in fact - which set out a programme of daily devotions. Exquisitely and elaborately decorated to reflect the wealth and social standing of the Duke, it took three years or more to complete and demonstrated the outstanding skill of the three miniaturists. Their patron was delighted with the work but, conforming as it did to the traditional format and decoration, he wanted to break new ground. It was a challenge that had to be met.

xxxxxThe brothers embarked on their most ambitious project, Les Très Riches Heures du Duc de Berry, in 1413. In this work they blended secular with religious art - a totally new departure - portraying the brilliance of the ducal court alongside the sacred imagery of the Church. And, in addition, they opened the book with a full-page illustration of each month of the year. These recorded, in minutely detailed images and bold, pure colours, a full year in the life of the Duke’s court and estates. Brilliantly portrayed were the changing seasons, the nobility at leisure, the architecture of the various buildings, the peasants labouring at their different tasks, and even the Duke’s own menagerie. 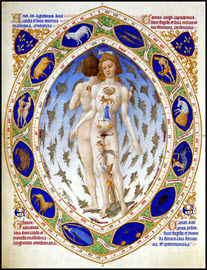 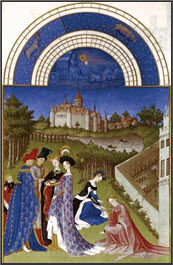 xxxxxFor three years the brothers worked ceaselessly to complete their exquisite task, but, with the coming of the plague in the spring of 1416, all three died, and the work was left unfinished. The illustrations for the month of November and part of September were yet to be done, together with a large number of smaller images. The Duke vowed to make good the omissions, but he himself died of the plague a few months later, and the book eventually came into the possession of the Duc Charles I of Savoie. Itxwas not in fact until some 70 years later, around 1485, that he commissioned the French miniaturist Jean Colombe of Bourges to complete the work. Today this unique book, the very best of miniature painting in France, is known as “the king of illuminated manuscripts”.

xxxxxIncidentally, the book is now housed in the Musée de Condé, Château de Chantilly, in France.