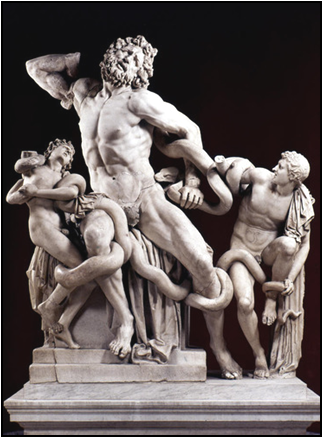 group of marble statues is thought to be the work of Rhodian artists in the first or second century BC. The Roman writer Pliny the Elder names three artists, Agesander, Athenodorus and Polydorus, but there is no corroboration. The classical group, standing eight feet high, depicts the Trojan priest Laocoon and his two young sons being attacked by two huge sea serpents, sent by Poseidon, the God of the Sea. In the famous story about the Trojan horse, Greek legend has it that Laocoon, because he warned that the horse would be a danger to the city, was attacked and strangled by serpents, along with his sons. His death convinced the Trojans that his fears had been groundless, and they let the horse into the city, thus bringing about their own destruction.

xxxxxThe marble group was unearthed in 1506 on the side of a hill in Rome, later identified as the site of the ancient Baths of Caracalla. Such is the power of this piece and the emotion that it portrays, that since its discovery it has been admired and used by many artists and writers. It is known that Michelangelo was inspired by the figures, and their influence can be seen in his statue of Moses for the tomb of Pope Julius II (still to be seen in the church of Saint Pietro in Vincoli) and his sculptures of two slaves (now in the Louvre in Paris). El Greco, Titian and Rubens also used the group as a model, whilst Lessing and Goethe wrote about it, and Virgil included the legend in his Aeneid. It is now in the Vatican at Rome.

xxxxxThe Laocoon group of marble statues was probably the work of Rhodian artists in the first or second century BC. It stands 8ft high and depicts the Trojan priest Laocoon and his two sons being attacked by two large serpents - an episode in the famous legend of the Trojan horse. The group was unearthed in Rome in 1506, and since then its powerful imagery has inspired many artists and writers, including Michelangelo, El Greco, Titian, Rubens, Lessing and Goethe. It is now in the Vatican in Rome.