xxxxxIn 1260, after a power-struggle with his younger brother Arigboge, Kublai Khan emerged as the Great Khan, and in 1267 resumed his conquest of China. Within four years he had taken over most of the northern region, and he then went on to establish his own dynasty (Ta Yuan), and make his capital at Beijing (Ta-Tu). It took him another eight years, however, to overthrow the Song dynasty in the south - established, as we have seen, in 1122 (H1) - and make himself master of all China by 1279 (E1). Virtually abandoning his other imperial territories, he now concentrated his efforts on governing his new Yuan Empire and extending its borders. But, as we shall see, his drive into South East Asia and his attack upon Japan in 1274 (E1) were not to meet with his accustomed success. Furthermore, the Mongols were in something of a dilemma. If they conquered in the ruthless style of Hulegu they alienated the people they defeated. On the other hand, if they accepted the civilisation they overran, like Kublai Khan, they lost their own identity. Herein lay the seeds of the empire's destruction. In the case of China, as we shall see, the gradual decline of the Yuan Empire was to bring about the establishment of the Ming Dynasty in 1368 (E3). 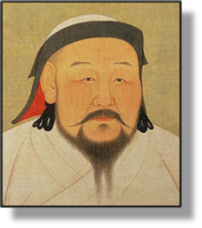 xxxxxKublai was well over 30 years of age before he began to play a prominent part in state affairs. He was assigned the task of continuing the conquest of China, started by his grandfather Genghis Khan, but when his brother Mongke, the Great Khan, died in 1259 a bitter dispute arose over the succession. Learning that his younger brother, Arigboge, was aiming to seize leadership of the empire, Kublai hurried back to Shang-tu, his residence in Mongolia, and, summoning a great assembly, had himself proclaimed the new Khan in 1260. A civil war followed, but Arigboge was defeated in battle in 1264 and died two years later. 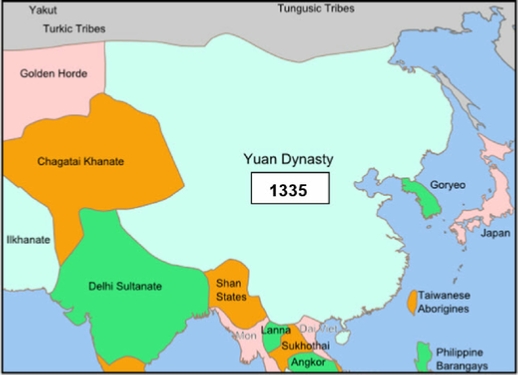 xxxxxIn 1267 Kublai resumed his conquest of China and by 1271 had conquered most of the northern area. He then established his own dynasty of Ta Yuan (Great Origin), and moved his capital to Beijing, then known as Ta-tu. It was not until 1279 (E1), however, that the Song dynasty in the south (established in 1122 (H1)) had been fully destroyed and Chinese unity had been accomplished. Buddhism now became the state religion. By this time Kublai Khan had virtually abandoned his control over other parts of his Mongolian Empire. Having assumed the title of Emperor of China, he now concentrated his efforts upon extending the boundaries of his Yuan Empire. With this in mind he looked southward to the lands of Indo China and eastward to the islands of Japan. As we shall see, his attack on Japan in 1274 (E1), was to put an end to his long series of victories.

xxxxxThe family feud which had surfaced following the death of the Great Khan Mongke did not go away after the defeat of Arigboge. A deep split continued in the family over those members who wished to maintain the methods of conquest followed by Ghengis Khan - an oppressive regime based on the total subservience of the defeated enemy - and those who, like Kublai Khan saw the need, as in China, of taking advantage of its civilisation rather than destroying it. As one Chinese sage put it in support of the latter: you can conquer an empire on horseback but you cannot govern it on horseback.

xxxxxBut as we shall see, both approaches contained the seeds of destruction as far as the Mongol Empire was concerned. The first did not achieve the building of a lasting empire. Once the horde moved on, the rule of the invader came to an end. In the second, the Mongolians - a simple folk at heart - found themselves submerged within the civilisation of those they had “conquered”. This was particularly the case in China, where, as we shall see, the decline of the Yuan Empire brought about the establishment of the Ming Dynasty in 1368 (E3).

xxxxxIncidentally, the nineteenth century English poet Samuel Taylor Coleridge wrote a poem entitled Kublai Khan. He claimed that, after reading about the Mongol leader he fell asleep and wrote the entire poem in his sleep. It’s a beautiful piece of verse about Kublai Khan's residence at Shang-tu, (called Xanadu in the poem) and it does, indeed, have a dream-like quality.