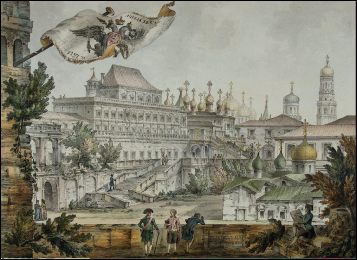 xxxxxThe word Kremlin derives straight from the Russian for fortress (kreml). As such, Kremlins are to be found in many Russian cities. Because of the protection they offered, they generally contained palaces for the local princes and bishops, munition stores, government offices and the city's cathedral. The biggest and best known, of course, is the large complex in Moscow, and so important did this one become that for many years it was used as a term to describe the Russian government, the seat of political power.

xxxxxConstruction of the Kremlin was probably begun around the middle of the twelfth century, but the first reference to it is found in a monastic chronicle dated 1331. It was originally built of wood, but was extensively updated by Ivan III, work commencing in 1485. It was he who built the crenellated brick wall which surrounds the fortress, though it has doubtless been renovated over the years. Nearly one and a half miles in length, and eventually ending up with a height of 70 feet, it is supported by twenty towers, nineteen of which were later capped by their distinctive cupolas. Also from this period is the famous Bell Tower, some 160 feet in height (illustrated below). 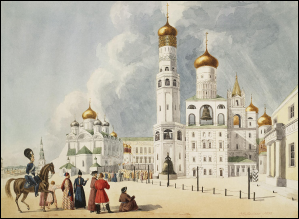 xxxxxWithin the walls - a triangular area of some 90 acres - Italian architects were brought in to renovate old buildings and construct new ones. Among the additions was the two-storey Granovitaya Palace, built in the early Renaissance style, and similar to the palaces of Ferrara and Bologna. Ivan doubtless conceived the Kremlin as a symbol of his authority, but the overall work was not completed until 1516, some years after his death. Nor was western design employed again until the coming of Peter the Great, a man dedicated to making Russia a European power.

xxxxxAs we shall see (1547 E6), it was Ivan IV who built St. Basil Cathedral in Red Square. Completed in 1560, it was built as a thanksgiving for his victory over the Tartars in the early 1550s. Its somewhat bizarre design has become a marked feature of the Moscow skyline.

xxxxxToday, the Kremlin, situated on a hillside, remains the dominant landmark in the Russian capital. Within its walls are no less than three cathedrals, centred on Cathedral Square, and among its most imposing buildings are three palaces built in the seventeenth century, the Terem, the Parriarch and the Poteshnyi - all in the heavily ornamented style of Russian Baroque - and the Great Kremlin Palace itself, completed in 1849. The east side of the Kremlin faces Moscow's famous Red Square.

xxxxxIncidentally, the name Red Square has no connection with the communist regime. It dates from the late 15th century, and comes from the Russian word krasnaya, which means “beautiful” as well as “red”.

xxxxxKremlin means fortress in Russian (Kreml), and most cities have one. However, the one in Moscow is the largest and, here, the name has also come to mean the Russian government itself. Its construction probably began in the 12th century, but was given an extensive update by Ivan III, the work beginning in 1485. He built the wall that surrounds the fortress, and the famous Bell Tower dates from this period. Some of the buildings in the 90 acre complex were renovated by Italian architects, including the Granovitaya Palace. There are no less than three cathedrals and three palaces within the Kremlin, designed in Russian baroque, and the Great Kremlin Palace was built in 1849. Red Square lies alongside the eastern wall. As we shall see (1547 E6), St. Basil Cathedral was built by Ivan IV. Completed in 1560, it was built as a thanksgiving for his victory over the Tartars in the early 1550s.