xxxxxJan Comenius was a Moravian pastor who had ideas about education which were well in advance of his time. In his Didactica Opera Omnia (Complete Didactic Works) published in 1657, he argued that teaching had to be attuned to the mind of the child. It was stimulation, assisted by pictures, models and music, which was the key to learning, not coercion. He advocated full-time teaching for all children, graded according to age. In the 1640s he advanced the idea that education could create “universal harmony”, but the “College of Light” he set up was not a success. However, he played a part in the establishment of the Royal Society in London, and he prevailed upon Gottfried Leibniz to open the Berlin Academy. His other works included a Latin primer, Gates of Tongues Unlocked, and The Visible World in Pictures, the forerunner of the illustrated textbook. Known as the “Teacher of Nations”, he influenced the work of Rousseau, Locke and Pestalozzi. 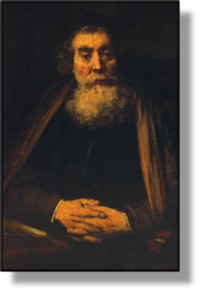 xxxxxJan Comenius was a Moravian pastor, later appointed a bishop, whose advanced methods of teaching and detailed plans for full-time schooling had a profound influence on education throughout Europe. He ended his days in Amsterdam and it was here in 1657 that he collected most of his writings together and published them under the title Didactica Opera Omnia (Complete Didactic Works). During his lifetime, he owed much of his fame to two of his works, the Gate of Tongues Unlocked - a practical primer for the teaching of Latin - and The Visible World in Pictures of 1658, a teaching manual which, by its liberal use of woodcuts, was the forerunner of the illustrated textbook.

xxxxxHe was born at Nivnic, Moravia, the only son of a prominent member of a Protestant group called the Bohemian Brethren. He was orphaned at the age of 12 and was sent to school at Prerov. A bright lad, he was befriended by the headmaster and went on to the University of Heidelberg to study for the ministry. It was here that he read the works of Francis Bacon and became interested in science and its potential as a force for good. With the outbreak of the Thirty Years War in 1618, however, his life became, as he put it, "one long journey". To avoid persecution and the ravages of war he was obliged to keep on the move. Over the next fifty years he worked in Germany, Poland, England, Sweden, Hungary and Holland. 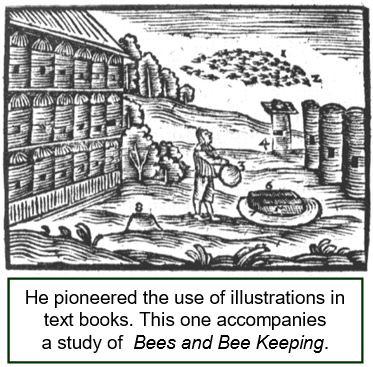 xxxxxHis overriding interest lay in education, and his advanced theories on this subject were set out in his first major work, The Great Didactic, completed in 1632. Teaching, he argued, needed to be attuned to the mind of the child. It was the ability to stimulate the pupil's interest, not coercion, that was the key to learning. To create such interest and reinforce the learning process, use must be made of supporting material, such as pictures, models and music. And alongside these novel teaching methods went an emphasis upon the teaching of Latin, vital, he insisted, for any real understanding of European culture. It was to this end that he produced his Gate of Tongues Unlocked in 1631, a type of Latin phrase book, in effect, which was translated into 16 languages and widely used throughout Europe.

xxxxxHis educational system was no less radical. He advocated full-time schooling for the nation's entire youth. The curriculum and methods of teaching were outlined for four age groups: mother care for the under 6, a vernacular school to the age of 12, a Latin or "grammar" school from 13 to 18, and then five years study at a university to develop determination and considered judgement. This was a tall order unto itself, but his vision went further. As a social reformer and humanist, his evaluation of education took on new bounds. Whilst working in Sweden in the 1640s he evolved his philosophy of pansophy, a theory by which education could be used to attain "universal harmony". In pursuance of this idea, he later set up a pansophic (all-knowing) school of one hundred pupils at Sarospatak in Hungary, aimed at providing a sample group of educated people whose acquired knowledge and compassion would bring understanding between the people of all nations.

xxxxxThis attempt to reform human society via education proved impractical. Bent on acquiring even the basic rudiments of learning, the pupils proved incapable of understanding let alone attaining the high and vague ideals which they had been set to achieve. Nevertheless, this attempt at a "College of Light" was not without benefit. It was Comenius who, while staying in England in 1641 and 1642, initiated discussions which led to the founding of the Royal Society. Likewise, it was due to his influence on the German philosopher Gottfried Leibniz that the Berlin Academy was established. These societies, and others like them, were a far cry from his grand concept of a universal knowledge bringing about a universal understanding, but they did serve as important centres of scientific and cultural advancement.

xxxxxAs a religious leader he did much to ensure the survival of his faith and to make possible the revival of the Moravian Church. As a social reformer he may be seen, perhaps, as the first international citizen. He was proud of his country, but saw himself as a European, dedicated to political unity and religious reconciliation. As an educational reformer he aimed, as he wrote, "to teach thoroughly all things to all men". His efforts in that direction earned him the title "Teacher of Nations". Distinguished men such as the French philosopher Jean-Jacques Rousseau, the English philosopher John Locke, and the Swiss educational reformer Johann Pestalozzi, were to walk in his footsteps.

xxxxxIncidentally, the 20th century Austrian painter and playwright Oscar Kokoschka was a great admirer of Comenius and shared his humanistic views. In 1934, when painting a portrait of the great Czech Tomas Masaryk, the first president of Czechoslovakia, he paid a fitting tribute to the 17th century reformer by including his portrait in the background of the painting, thus providing a link between two patriots of past and present. The following year Kokoschka produced a play based on the life of Comenius.