xxxxxThe Danish philosopher and theologian Soren Kierkegaard was a prolific writer, producing more than 20 books in the space of fourteen years. He attended the University of Copenhagen, and it was there that he came to know and reject the doctrines of the German philosopher Georg Hegel (1807 G3c). In his Philosophical Fragments of 1844 and his Concluding Unscientific Postscripts, published two years later, he attacked Hegel’s sterile metaphysics, arguing that his rational understanding of human existence took no account of the emotions and feelings of the individual. It was the individual, claimed Kierkegaard, who had the right to make his or her own decisions and beliefs, unhampered by universal, objective standards. Therein lay the seeds of Existentialism, developed further by the German philosopher Friedrich Nietzsche in the 1880s, and gaining full expression in the writings of Jean Paul Sartre and other 20th century novelists. In his first major work, Either/Or of 1843, and its sequel Stages on Life’s Way, Kierkegaard defined three spheres of existence: the aesthetic, dominated by self-gratification; the ethical, based on duty and social obligations; and the religious, the highest level of human life, which required a passionate commitment and a “leap of faith”. In his last years he launched a bitter attack upon the Danish State Church, accusing it of corruption and what he called “Sunday Christianity”, a series of empty formalities which were meaningless if the individual did not have a passionate belief in God. Kierkegaard was born in Copenhagen and spent most of his life in this city. His long hours of work, and the severe criticism his views attracted, undermined his health, and he died in November 1855, aged 42.

Kierkegaard: sketch by his cousin Niels Christian Kierkegaard (1806-1882), c1840 – Royal Library of Denmark, Copenhagen. Individuality and Freedom: based on The Thinker, a work by the French sculptor Auguste Rodin (1840-1917), Rodin Museum, Paris. 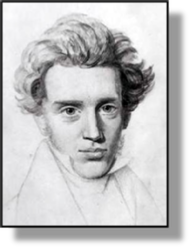 xxxxxThe Danish philosopher and religious thinker Soren Kierkegaard produced a great deal of material, much of it written in the form of essays, parables and fictional letters, and published under pseudonyms. A brilliant, witty writer with a highly persuasive style, his works had a marked influence on philosophical and religious thought after they had become more widely translated during the first half of the 20th century.

xxxxxHe is especially remembered today for his early contribution to Existentialism, the theory that in life an individual has no social or moral restraints upon his or her behaviour, and is therefore free to determine his or her unique development. In his Philosophical Fragments of 1844, and his Concluding Unscientific Postscripts, published two years later, he mounted a scathing attack upon the doctrines of the German philosopher Georg Hegel (1807 G3c). He attacked his sterile metaphysics, arguing that his objective theory of knowledge was not workable, and took no account of the emotions and feelings of the individual. On the contrary, his alleged rational understanding of human existence, shored up by an objective system of doctrinal truths, only served to encourage the abandonment of individual choice and responsibility. 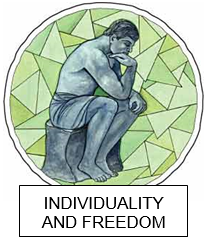 xxxxxKierkegaard claimed that individuals, through their own unique experience, had to make their own decisions and form their own beliefs, totally unhampered by universal, objective standards, which, as in the works of Spinoza and Marx (in addition to those of Hegel), made the individual more or less irrelevant. Herein lay the very seeds of Existentialism, dramatised in the novels of the Russian Fyodor Dostoevsky, expanded in the philosophy of Friedrich Nietzsche in the 1880s, and given full expression in the writings of Jean Paul Sartre and other novelists in the 20th century. 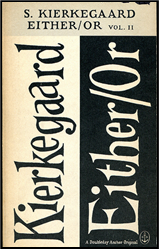 xxxxxIn his first major work Either/Or, published in 1843, and its sequel Stages on Life’s Way, produced two years later, Kierkegaard answers the question “how should we live?”. He defines three spheres of existence: the aesthetic, wherein a person follows his own self-centred desires and pleasures; the ethical, characterised by a life based on duty and social obligations; and the religious, requiring a passionate, spiritual commitment and a “leap of faith” as the 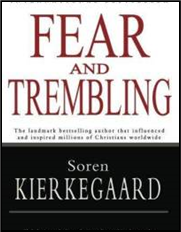 only way to redemption. In this, the highest level of human life, he maintains that reason plays no part because religious belief is not based on an intellectual exercise - if it were then it would surely remove the need for faith - but on an authentic force from within, a matter of individual passion. Indeed, reason, he argues, can only undermine faith, never justify it. And as a means of illustrating the nature of God and faith, his work Fear and Trembling, also published in 1843, recounts the dilemma of Abraham when commanded by God to sacrifice his son Isaac - the challenging alternative between the ethical and the religious, between an abstract rule and a total spiritual commitment.

xxxxxTowards the end of his life Kierkegaard launched a devastating attack upon the Danish Lutheran Church and became highly unpopular as a result. In a series of literary and philosophical essays he accused the Church of being incompetent and corrupt, and condemned the empty formalities of what he called “Sunday Christianity”. Going through the motions of a Christian life - attending church, reading scripture and observing laid down ethical precepts - was shallow and meaningless if an individual did not have a personal and passionate belief in God. And this criticism of the Christian Church was accompanied by an equally scathing attack upon European society as a whole. In works such as The Present Age, published in 1846, he maintained that Europe was on the road to bankruptcy, doomed by an age obsessed with materialism and conformity, and lacking both passion and commitment.

xxxxxKierkegaard was born in Copenhagen, the youngest of seven children, but five of his siblings and his mother had died by the time he reached the age of 21. He studied philosophy and theology at the city’s university, and it was there that he came to know and oppose Hegelian philosophy. In 1841, after suddenly breaking off his engagement to the daughter of a treasury official - and attracting public disapproval as a consequence - he went into seclusion and, assisted by an allowance from his father, devoted the rest of his life to writing. Over the next fourteen years he produced over 20 books, but the work involved, the criticism he received from the Danish Church, and his tendency to melancholia, took their toll on his health. He was taken ill in October 1855, and died the following month, aged 42.