xxxxxThe Scotsman William Kidd was a successful ship owner in New York and, on returning to England in 1695, was commissioned by the Earl of Bellomont to operate against piracy in the Indian Ocean. Having arrived there he chose to become a pirate himself, working out of Madagascar. Then in 1699 he sailed to the West Indies, where he learnt that he was wanted for piracy. He went to New York to try to persuade Bellomont, then governor of the city, that he was innocent, but he was not successful. He was sent to London where, convicted of piracy and murder, he was hanged in May 1701. The life of Kidd, and of other pirates who came after him - such as the notorious Blackbeard - have been romanticised in literature over the years.

Kidd: date and artist unknown. Hanging: drawing from The Pirates Own Book by the American writer Charles Ellms (1805-851),1837. Blackbeard: drawing from A General History of Pyrates by the self-styled Captain Charles Johnson (identity unknown), first published in 1725 – Library of Congress, Washington, D.C. Morgan: woodcut, later coloured, artist unknown, from A History of the Buccaneers of America, the work of the French (?) writer Alexandre Olivier Exquemelin (c1645-1707), first published in 1678. 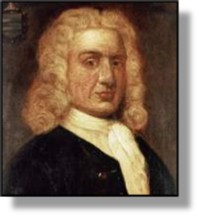 xxxxxCaptain William Kidd was born in Greenock, Scotland. He went to sea as a young man and, after serving as a legitimate privateer against the French off the North American coast, became a successful ship owner and leading citizen of New York. He returned to England in 1695, and was commissioned by the Earl of Bellomont to operate against piracy in the Indian Ocean. The following year, as captain of the Adventure Galley, he sailed to the Comoro Islands off the east coast of Africa. Having arrived there, however, he chose to become a pirate himself and joined a band of buccaneers working out of Madagascar. During 1697 and 1698 he patrolled the local waters and seized several ships, including the Quedagh Merchant, a rich Armenian vessel.

xxxxxIn 1699 he sailed to the West Indies and, on hearing that a warrant had been issued for his arrest, he made for Oyster Bay, Long Island, and then on to New York where Lord Bellomont was governor. He tried to persuade his former patron of his innocence, but Bellomont would have none of it, and sent him to London. There he was convicted of piracy and murder, and hanged at Tilbury Point, on the River Thames, in May 1701. Some of his booty was discovered on Gardiners Island, at the eastern end of Long Island, and this led to the belief that more was buried in that area. Needless to say, since that time numerous searches have been organised based on legend and hearsay, but no more treasure has ever been found.

xxxxxOver the years following his death, the life of Kidd - and of the pirate in general - has been romanticised in literature. Inx1712, for example, the English playwright Charles Johnson (1679-1748) produced The Successful Pyrate, and in 1843 Edgar Allan Poe published The Gold Bug, a story based on the search for buried treasure. Laterxcame the Pirates of Penzance by Gilbert and Sullivan, and the novels by the Italian author Rafael Sabatini (1875-1950), all glamorising the pirate as a swashbuckling hero. In fact, of course, Kidd and his fellow pirates were robbers and murderers, and the trial and execution of Kidd, both widely publicised at the time, was meant as a clear signal that the government was no longer prepared to close their eyes to piracy on the high seas.

xxxxxPiracy has occurred in all ages. The Romans were troubled by it, the Vikings practised it, and the Hanseatic League was formed in the 13th century to protect against it. The Barbary States of North Africa flourished from the exploits of their “corsairs”, and many European counties, and particularly England, gave unofficial support to the privateer when attacking Spanish treasure ships returning from the New World in the 16th century. The exploits of men like Hawkins and Drake are well documented. Indeed in some parts, like the coast of North Africa, the Caribbean, the Persian Gulf and Indonesia, bases were set up to support pirate activity. It is estimated that by 1720 some 2,000 were at work in the Atlantic, but this declined drastically with the advent of steam, though it remained a real threat in the Far East for many years. 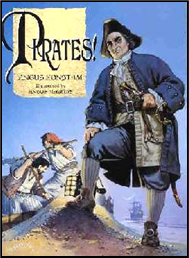 xxxxxPiracy dates from ancient times and was prevalent among the Phoenicians, one of the world's earliest seafaring nations. The Romans were obliged to launch attacks upon pirates in the eastern Mediterranean, and in medieval times the Vikings made countless raids against shipping along the whole length of Europe's west coast. And as we have seen, one of the reasons for the formation of the Hanseatic League in the 13th century was the merchants' need for protection against attacks from pirates in the Baltic and North Seas. Later came the Barbary States of North Africa, whose rulers, as we have seen (1535 H8), made a good living from the exploits of their ruthless "corsairs". The Congress of Vienna in 1815 (G3c) called for an end to their operations, but they were not finally suppressed until well into the 19th century. You may recall that the Spanish writer Miguel de Cervantes was captured by these outlaws in 1575. And around that time piracy also had a hand in the decline of Venice as a leading maritime power.

xxxxxThe 16th century witnessed a new outbreak of piracy, with sea raiders preying on the Spanish galleons which were bringing precious metals home from the New World. This was the heyday of the "privateer". He was really a legalised pirate, given authority by his government to waylay ships of an enemy country in time of war. Very often, however, a number of rulers, particularly Queen Elizabeth of England, gave support to their privateers, war or no war. Indeed, adventurous seafarers like Hawkins and Drake went so far as to attack ports along the Spanish Main, the coastline of Spanish America. In these parts piracy became a lucrative business, and by the 17th century numerous bases had been set up in the Caribbean to supply powder, cannon, food and rum. And other areas, like the Persian Gulf and the coastal waters of China, Malaya and the East Indies provided haunts for the pirate over many y 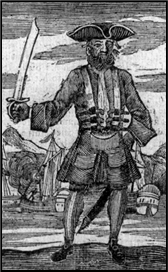 ears - and some still do.

xxxxxThexhigh-profile example made of Captain Kidd did certainly not have an immediate impact on piratical activity. Indeed, within fifteen years the notorious Blackbeard (c1680-1718) - one Edward Teach, (illustrated) - was terrorising ships sailing along the coasts of North Carolina and Virginia. Furthermore, it is estimated that by 1720 some 2,000 pirates were at work in the Atlantic. However, by this time the growing importance of international trade was causing governments to step up naval patrols, and during the ten-year period 1716 to 1726, 400 pirates were executed as a result of British naval action. Then, with the development of the steam engine and the growth of the American navy, piracy in the Atlantic began to decline dramatically after 1815. However, the same cannot be said of certain coastal waters in the Far East. Here, raids continued into the 20th century. Indeed, there is still some pirate activity in this area, notably around Indonesia. 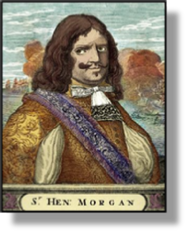 xxxxxIncidentally, another famous buccaneer of these times was the Welsh adventurer Sir Henry Morgan (1635-1688). Operating with the unofficial support of the English government, he plundered the Spanish colonies in the Caribbean for many years, and is especially remembered for his daring attack upon Panama in 1670. He captured the city but, on his return journey, made off with most of the booty! However, unlike Kidd, he lived to a good age. He was later pardoned, knighted for his services to the crown, and ended his days as deputy governor of Jamaica! ……

xxxxx…… The name "buccaneer" derives from boucon, a wooden frame on which the pirates of the Caribbean smoked the meat of cattle they had stolen and slaughtered.