xxxxxThe English inventor John Kay patented his "flying shuttle" in 1733. The first move towards mechanisation, it improved the quality of the cloth and doubled the amount of work a weaver could do. However, opposition by the workers, who anticipated the loss of their jobs, delayed its use until the 1760s. Fearing for his own safety, he was obliged to flee to France, where he died in poverty. As we shall see, this invention, together with those made by his fellow countrymen James Hargreaves, Richard Arkwright and Samuel Crompton during the early years of the next reign (G3a), were to bring about factory production in the textile industry - the first major step towards the Industrial Revolution. 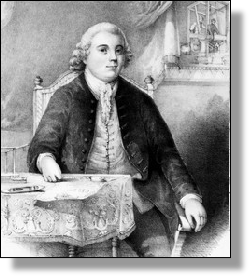 xxxxxThe English inventor John Kay patented his "flying shuttle" in 1733. (illustrated below). A shuttle on wheels, it was specifically designed to speed up the work of hand-loom weaving, and was the first move towards mechanisation. It not only improved the quality of the cloth - closing up the threads of the weft more tightly - but it also doubled the amount of work a weaver could do, enabling textiles to be produced much more quickly and cheaply.

xxxxxUnfortunately for him, the workers saw this innovation as a threat to their jobs, and the employers were reluctant to pay for the idea. He was obliged to defend his patent in a series of costly lawsuits. As a result he lost much of his wealth, and his invention was not widely in use until the 1760s. In the meantime, his home was wrecked by a mob of textile workers in 1753, and, fearing for his life, he fled to France. Here his invention proved o 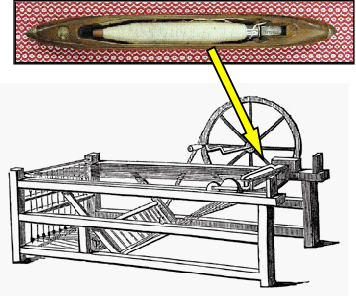 f some success, but he is believed to have died in poverty around 1780.

xxxxxBorn near Bury, Lancashire, Kay was the son of a woollen manufacturer. He joined his father's trade and, as a broadcloth weaver himself, made a number of improvements to textile machinery apart from the flying shuttle. In 1730, for example, he designed a more advanced device for combing and carding wool. As we shall see, in the early years of the next reign (G3a), these innovations, together with inventions made by his fellow-countrymen James Hargreaves, Richard Arkwright and Samuel Crompton, were to play a major part in hastening the move towards factory production in the textile industry - the first major step in the Industrial Revolution.

xxxxxIncidentally, it was called a "flying" shuttle because, by means of a driver mechanism, it was sent flying across the width of the loom by the jerk of a cord.