xxxxxAs we have seen, it was in 1603 (J1) that the Tokugawa shogunate was founded. This gave Japan a long period of peace and stability. At first Europeans were welcomed, but this quickly changed, and by 1650 the vast majority had been killed or expelled. In 1854, however, this policy of isolation was brought to and end by the U.S. government. Having sent Commodore Matthew Perry (1794-1858) to Japan with a number of warships, he virtually forced the shogunate to accept the Treaty of Kanagawa. This opened up a number of ports for trade, gave U.S. ships the right to buy coal, and established a U.S. consul at Shimoda. Within a few years a number of European countries had followed the U.S. lead. However, this influx of foreigners was opposed by the ruling classes in Japan, and eventually civil war broke out in 1866. This ended with the overthrow of the last Tokugawa shogun. As we shall see, in 1868 (Vb) imperial rule was restored, and the young emperor, Mutsuhito, began a reign which was to see Japan emerge as a world power. The first step towards this was the defeat of the Chinese in the Sino-Japanese War of 1894 (Vc).

xxxxxAs we have seen, it was in 1603 (J1) that Tokugawa Ieyasu founded the Tokugawa shogunate and gave Japan a long period of peace and stability. He imposed a rigid feudal system and, at first, was prepared to tolerate Christians and welcome European traders. In 1612, however, he began the persecution of both, and this policy was continued by his successors. By 1650 the vast majority of Christians had been killed or expelled, and only a few Dutch and Chinese traders were allowed to remain in Nagasaki. This isolationism served to develop a fiercely nationalistic and inward-looking culture, but in 1853 the first sign of a change came about. 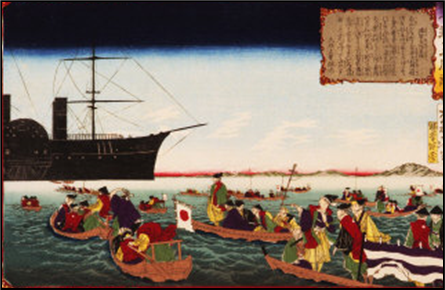 xxxxxIt was in that year that the American government sent Commodore Matthew Perry (1794-1858), a distinguished naval officer, on a mission to Japan. He sailed into Edo (Tokyo) Bay with a fleet of four warships (illustrated here) and sent the emperor the draft of a treaty of friendship and a trade agreement. Then, having impressed the Japanese with this show of strength - they thought that the two steamships were floating volcanoes - he set sail for China in order to give the Japanese court time to consider the offer. He returned in February 1854 with an even more powerful fleet, and this clearly convinced the Tokugawa shogunate that a deal had to be struck. In no way could such military strength be matched. By the treaty that was signed at Kanagawa the following month (a town south-west of Tokyo) it was agreed that U.S. ships would be permitted to buy coal in Japan, the ports of Shimoda and Hakodate would be open to US shipping, and that a U.S. consul would be stationed at Shimoda. In addition, this gun-boat diplomacy secured the release of American whalers who had been shipwrecked along the Japanese coast, thereby achieving a prime object of the U.S. mission. A commercial treaty was signed in 1858 (the Edo Treaty), and two years later a Japanese embassy was established in the United States. In 1862 the shogunate sent out trade missions to Europe. 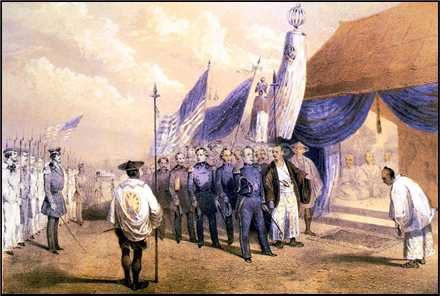 xxxxxThis treaty (sometimes known as the Perry Convention and illustrated here) was but the first in a long line of trade and diplomatic agreements between Japan and other Western countries (the United Kingdom, Russia, the Netherlands, and France) over the next ten years. They became known as the “unequal treaties” because, without exception, they were unfavourable to Japan and remained so until revised in the 1890s. In 1859, for example, the treaty ports of Nagasaki, Yokohama and Hakodate were opened to general trade, followed by Niigata and Koe in the early 1860s. At the same time, the right of the Japanese to fix tariff rates was restricted, and foreign nationals in Japan who committed an offence were not subject to Japanese jurisdiction, but were to be tried by consular courts established by the treaty powers - a serious encroachment upon sovereign power. These treaties were often made under military duress. In 1858, for example, the imminent arrival of a British fleet resulted in a hurried trade agreement, concluded without imperial consent.

xxxxxThroughout Japan, however, where the Tokugawa regime was beginning to lose its grip on government and support was rallying round the emperor, there was growing opposition to the opening up of the country to the outside world. The majority of the daimyo (landholders) and samurai (warriors) favoured resistance against the intruders, adopting the slogan “revere the emperor, repel the foreigner”. There was an increasing number of attacks upon Europeans, both missionaries and traders. In 1862 the British bombarded and destroyed the city of Kagoshima following the murder of a British subject, and two years later a combined fleet from the U.S, Britain, France, and the Netherlands shelled the city of Shimonoseki and imposed a fine on the Choshu after their chief had fired upon foreign ships.

xxxxxAs we shall see, the growing opposition to the Tokugawa government, embittered by the deep divisions caused by the “unequal treaties” led to the outbreak of the Boshin War in 1868 (Vb) and the resignation of the last Tokugawa shogun, Yoshinobu. In the same year imperial rule was officially restored into the hands of the young emperor Mutsuhito. He moved his capital from Kyoto to Edo (renamed Tokyo) and adopted the title Meiji, meaning “enlightened government”. And so it proved to be. During his reign Japan was to become a world power, starting, as we shall see, with the defeat of China in the Sino-Japanese War of 1894 (Vc). 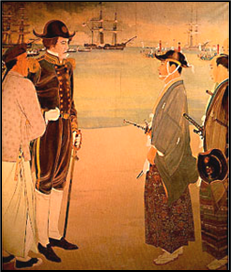 xxxxxIncidentally, Commodore Matthew Calbraith Perry was commissioned a midshipman at the age of fifteen. He served in the War of 1812, assisted in the founding of the African state of Liberia four years later, and commanded the Gulf squadron during the Mexican War of 1847. During his career he set up the first naval engineer corps, and played a prominent part in the construction of the Fulton, the first naval steamship. On its completion in 1837, he took command of the ship, and was promoted to commodore four years later. Having returned from his mission to Japan, he died in New York City in March 1858. (The sketch shows Commodore Perry landing at Edo Bay). ……

xxxxx…… The Treaty of Kanagawa was not signed by the Japanese, though they fully accepted its terms. It appears that Japanese law forbade any subject of the Empire from putting his name to any document written in a foreign language! ……

xxxxx…… As we have seen, the first “unequal treaty” was imposed upon China by the British when the First Opium War, which broke out in 1839, was concluded by the Treaty of Nanjing in 1842.