xxxxxThe English architect Inigo Jones introduced the Palladian style of classical architecture into England, having been influenced earlier by the work of the Italian architect Andrea Palladio. He was first employed by the Queen as a theatrical designer for masques, often in partnership with the dramatist Ben Jonson, but in 1615 he was appointed Surveyor of the King’s Works, responsible for the building or restoration of many royal houses. These included the Queen’s House at Greenwich, and the Banqueting House in Whitehall, London (1622). Later he designed and constructed the area known as Covent Garden, and he worked on the restoration of St. Paul’s Cathedral. Wilton House, near Salisbury, remains as a fine example of his design. During the Civil War his estates were confiscated, and he was heavily fined, but he was pardoned in 1646. His elegant, classical style inspired the Palladian revival of the next century, and influenced masters such as William Kent, the Adam Brothers, the Woods, and Sir William Chambers. 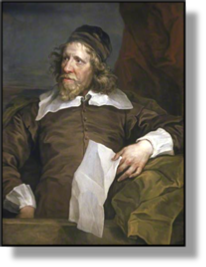 xxxxxInigo Jones, England's first significant architect and designer, was the man who introduced the Palladian style of classical architecture into England. It was during a visit to Italy between 1598 and 1604, and later in 1613, that he saw and was greatly influenced by the late Renaissance work of the Italian architect Andrea Palladio. His Four Books of Architecture, written in 1570 and containing drawings and dimensions, proved of particular value to him.

xxxxxWhile on his first visit to the Continent he worked for a short while for Christian IV of Denmark, the brother of Anne, the wife of James I. On his return to London this connection worked in his favour. He was employed by the Queen as a theatrical designer, and was responsible for designing elaborate scenery, costumes and stage effects for a large variety of masques, a number in partnership with the poet and dramatist Ben Jonson before they quarrelled and split up. The sketches for some of these settings and costumes have survived, and are held in various collections. More than 450 of them, made for the production of 25 masques, are held at Chatsworth House in Derbyshire. 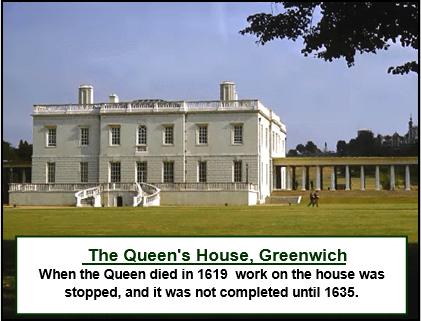 xxxxxIn 1615 Jones was appointed Surveyor of the King's Works, a position he held until 1642. In this post he was responsible for the building or restoration of many royal houses in and near London, including the Queen's House at Greenwich - the first truly classical building in England -, and his masterpiece, the Banqueting House in Whitehall (illustrated below), intended, when built, as part of an immense palace. Completed in 1622, the main ceiling panels of the great chamber were later adorned with a series of allegorical paintings in praise of the Stuart monarchy, the work of the Flemish painter Peter Rubens. The only other surviving royal building is the Queen's Chapel at St. James's Palace, started in 1623.

xxxxxIn 1630 he introduced an element of town planning into London with his design and construction of the area known as Covent Garden. This included a formal square laid out as a fruit, vegetable and flower market, the stalls of humble produce housed in neo-classical arcades. None of the houses built there survives, but his church of St. Paul still stands (illustrated below), though much altered over the years. Soon after its completion he started work on one of his major projects, the restoration 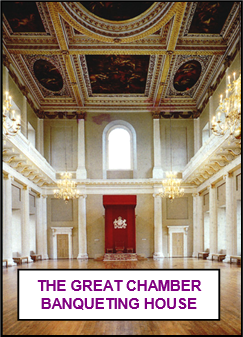 of St. Paul's Cathedral. Finished in 1640, its design had a marked influence upon Sir Christopher Wren when he came to rebuild the cathedral after the Great Fire of 1666. Ofxhis country houses, Wilton House near Salisbury remains as a fine example of his design, but some of the construction here was the work of his apprentice John Webb (1611-1672), a capable architect who carried on his master's tradition after the restoration of the Monarchy in 1660.

xxxxxUpon the death of James I, Jones retained his post under Charles I, but because of his association with the royal family he was obliged to leave London at the outbreak of the civil war in 1642. He was captured by Cromwell's forces three years later at the siege of Basing House, a royalist stronghold. His estate was confiscated and he was heavily fined. In 1646, however, he was pardoned, and on completing his work at Wilton House, he returned to London and died there in June 1652.

xxxxxLittle is known of his early life. He was born in London, the son of a cloth maker, and it is possible that he trained to be a joiner before becoming an architect. If so, then it is fortunate for England that he changed his profession. Quite apart from the elegance of his buildings, many of which have not survived, his influence on English architecture proved immense, providing as he did the inspiration for the Palladian revival of the next century, led by such masters as William Kent, the Adam Brothers, John Wood the Elder and Younger, and Sir William Chambers. Jones was buried in the grave of his parents in the church of St. Benet, Paul's Wharf, in London.

xxxxxIncidentally, the portrait of Inigo Jones above was the work of the English artist William Hogarth. He painted it in 1758 from a painting produced by Anthony Van Dyck in 1636, and it can be seen at the National Maritime Museum in Greenwich, London.