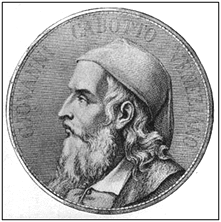 navigator and explorer John Cabot was born Giovanni Caboto, probably in Genoa, Italy. He became a citizen of Venice in 1476, and doubtless learnt his seamanship and navigational skills while sailing in the Mediterranean. He might well have moved to England with his family somewhere around 1484 and settled in Bristol, though this move might have been much later. His reason for coming to England is not known, but it appears that he had been convinced for some time that there was a westward sea route to the Orient, and he may well have thought that a route further to the north would be more direct. When in 1493 news was heard that Christopher Columbus had indeed discovered new land in that direction, he was anxious to do likewise. In 1496 he received the support of Henry VII and the financial backing of certain Bristol merchants for a voyage of discovery across the Atlantic. 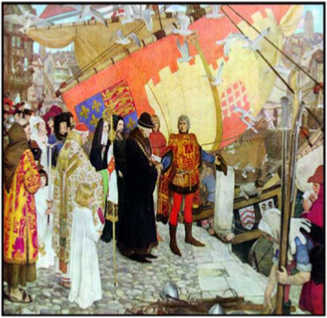 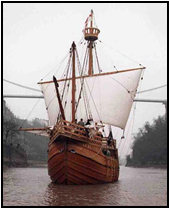 in May 1497 (illustrated left) with no more than 20 men in a small ship called Matthew, and landed in North America - most likely Newfoundland or Nova Scotia - the following month. He then sailed down the east coast of North America before returning to a warm welcome, a pension for life, and a king who was now able to lay claim to what turned out to be the vast land of Canada. (The Matthew shown here is a replica of Cabot’s caravel, made in 1997 to mark the 500th anniversary of the voyage. It sailed to Newfoundland in that year and, fittingly, is now moored in a floating harbour at Bristol.)

xxxxxCabot now organised a second, larger expedition, convinced that, having reached the northern coast of Asia, he would be able to find his way to Japan, then known as Cipangu, the land of gems and spices. This time five ships and a force of some 200 men set out, leaving in May 1498. It is known that, soon afterwards, one of the ships was damaged and had to seek shelter somewhere 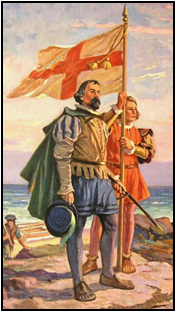 along the Irish coast, but virtually nothing is known about the fate of the four remaining vessels. One theory is that Cabot reached the east coast of Greenland where, because of the severe cold, his crews mutinied and all the ships were lost. It certainly seems that the expedition perished. If only one of the ships had returned there would surely have been some information to be had about the fate of the second voyage. However, it appears that certain documents have come to light which suggest that Cabot was back in London in May 1500!

xxxxxWhilst Cabot had staked a claim for England in the New World, there was no immediate follow-up by way of empire building. The uncertainty surrounding the 1498 expedition might well account for this. As we shall see, however, in 1553 (E6), a further attempt was made to open up sea routes via the Atlantic, this time via a north-east passage. In these attempts Cabot's son, Sebastian Cabot, having already made a voyage to Labrador in 1508, was to play an important part.

xxxxxIncidentally, Bristolians (residents of Bristol) are likely to claim that John Cabot discovered the mainland of America, Columbus only discovered offshore islands! They also claim that America was named after the High Sheriff of Bristol at that time, one Richard Amerycke, who helped to finance the voyage and gave Cabot a pension on his return! It is generally considered, however, that the continent was named after the Florentine navigator Amerigo Vespucci (1501) at the beginning of the 16th century. …… 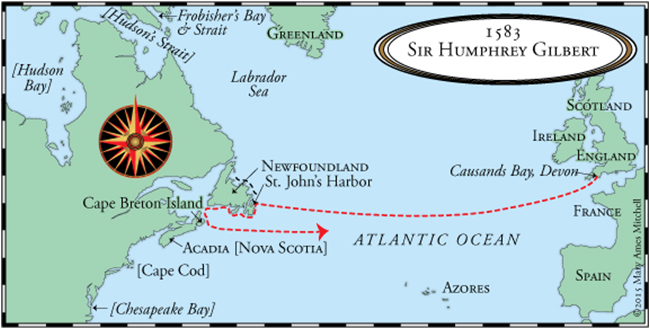 xxxxx…… It is not known exactly where Cabot landed in North America, but Newfoundland is thought to be the likely place. What is known, however, is that in 1583 five ships under the command of the English adventurer Sir Humphrey Gilbert (1539-1583) landed at present-day St. John’s and claimed Newfoundland for Elizabeth I. On his return, the vessel he was sailing in, the Squirrel, was battered by a storm and sank with all hands.

xxxxxIt was in 1496 that the Italian navigator John Cabot, then living in England, received the support of Henry VII, and financial backing, to find a westward route to the Orient. He sailed from Bristol in May 1497 and landed in North America - probably Newfoundland - the following month. He sailed down the coast and then returned to England, having claimed the land, Canada, for the English crown. Thinking he had reached Asia, he led a second expedition of five ships in May 1498. One of the vessels was damaged early on and took refuge in Ireland, but nothing was ever heard again of the four other ships. It was assumed that they had been shipwrecked. As a result no further attempts were made until the early years of the new century, when John Cabot's son, Sebastian Cabot, reached as far as Labrador, like his father, and then, as we shall see, played an important part in attempting to find a north-east passage in 1553 (E6).