xxxxxIt was around 1448 that the German printer Gutenberg, in partnership with Johann Fust, set up a press which used movable metal type. It was while using this new method that he began printing the large Latin bible associated with his name. In addition, he may well have printed the Psalter (Book of Psalms), the first example of colour printing, published in 1457. In 1455 he broke with Fust and set up a new workshop at Mainz or nearby Eltvile. It is difficult to exaggerate the importance of this invention. This new, faster method gave an enormous boost to the spread of learning at the very commencement of the Renaissance. By 1500 it is estimated that presses of his design had produced some six million books.

aaaaaGutenberg was probably born in Mainz, and was 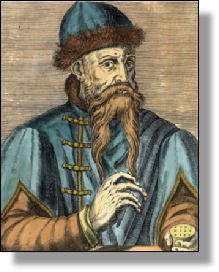 originally trained as a goldsmith. He possibly moved to Strassburg (Strasbourg) when he was about 30 and it was here that he conducted experiments in printing. It was not until 1448 or thereabouts, however, having returned to Mainz, that in partnership with Johann Fust (1400-1466), he set up a press which used movable metal type. The letters, each in Gothic style, were made from a mould which had been punched into a slab of brass. These were then made up on a flat surface to produce a process which came to be known as letterpress printing. Using a specially prepared oil-based ink which would adhere to metal, and a winepress adapted for the purpose, he was then able to produce a page of print.

aaaaaIt was by using this new, revolutionary method that Gutenberg started printing the large Latin Bible associated with his name, although there is reason to suggest that it may have been Fust and his future son-in-law, Peter Schoffer (c1425-1503) who actually did the printing. A number of other works are sometimes attributed to Gutenberg. Among these is the Psalter (Book of Psalms), the first example of colour printing. This was published by Fust in 1457, but might well have been produced with type originally made by Gutenberg. 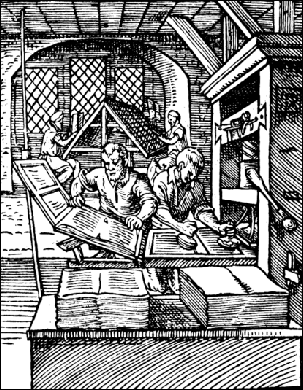 completion of the bible around 1455, the partnership came to an end following a dispute over money. Fust demanded the return of his share in the enterprise, and when this was not forthcoming he confiscated all the type and the presses and set up his own printing business. Gutenberg soon established a new workshop, however, either at Mainz or nearby Eltvile, and continued to print. In 1465 his patron, the Archbishop of Mainz, granted him a pension and exempted him from a number of taxes. He died in Mainz three years later, and it is here, in the museum, that one can see a reconstruction of his workshop and the press which made him famous.

aaaaaIt is difficult to exaggerate the importance of this invention, an invention which, with very little modification, remained the method of printing until well into the 20th century. China and Korea had made some advances towards this method by the eleventh century, but, like those in Europe before Gutenberg, printing had been based for many years on woodblock printing or stamping individual letters on various surfaces. This new, faster method was to give an enormous boost to the spread of learning in Europe at the very time when the Renaissance was discovering the literature and the philosophy of the ancient world. It could not have come at a more favourable time. Within thirty years of the invention, these new presses were being used throughout Europe, and by 1500 it is estimated that they had produced some six million books. It was a communications revolution without parallel until the nineteenth century.

xxxxxThe Gutenberg Bible was the first book printed in Europe by mechanical means. Sometimes known as the 42-line Bible, it was made up of 1,284 pages, each of two columns. Each page had some 2,500 pieces of lead type, each set in place by hand. It was completed around 1455. Forty-seven copies have survived but only three in good condition. It is sometimes known as the Mazarin Bible because the first copy came to light in 1760, discovered among the books of the French statesman Cardinal Jules Mazarin. 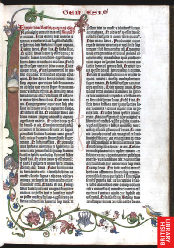 1455, was the first book printed in Europe by mechanical means. Sometimes called the 42-line Bible because of the number of lines to each column, it comprised 1,284 pages, each with two columns. Each page was made up of some 2,500 pieces of lead type in heavy Gothic script, and each had to be set in place by hand. It was a laborious process but, nonetheless, six presses printed somewhere in the region of 30 pages a day. Forty-seven copies of this work have survived but only three are in good condition - one in the Library of Congress, Washington DC, acquired in 1930, and one in the national libraries of France and Great Britain. The illustration shows the opening page of St. Paul's epistle to the Romans.

aaaaaIncidentally, the Gutenberg Bible also goes by the name of the Mazarin Bible. This is because the first copy to come to light was discovered in about 1760 among the books of the French statesman Cardinal Jules Mazarin.