xxxxxAt the age of 17 the French peasant girl Joan of Arc, claiming to have received spiritual guidance, visited the Dauphin and convinced him of her mission to defeat the English. In 1429 she led the French army to a resounding victory over the English at the Battle of Patay, north of Orleans, and witnessed the crowning of the Dauphin at Reims. Whilst campaigning the following year, however, she fell into the hands of the English, and an ecclesiastical court at Rouen found her guilty of heresy and witchcraft. In May 1431 she was burned at the stake. Today a national hero, there is no doubt that she played a vital psychological role in renewing French hopes and resolve at a crucial time in the Hundred Years’ War. 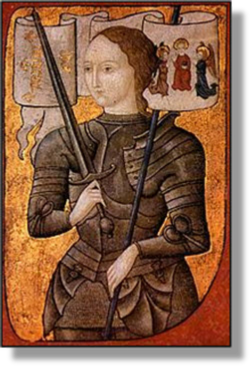 aaaaaJoan was born into a peasant family in Domremy in Lorraine, and at the age of thirteen claimed that St. Michael and the early martyrs St. Catherine and St. Margaret had spoken to her. Four years later, at the command of these "voices", she went to the Dauphin at Chinon in north-west France, and convinced him that she had a divine mission to lead an army against the English - then besieging the city of Orleans -, drive them out of northern France, and secure his coronation. Her claims were accepted by a board of theologians and, dressed in battle armour, she led the French to a resounding victory over the English at the Battle of Patay, north of Orleans, in 1429. This incredible feat, coming at a time when all seemed lost, proved a turning point in the Hundred Years’ War. Orleans was relieved and, as predicted, the Dauphin was crowned Charles VII in Reims cathedral the same year, 1429. The Maid of Orleans, as she came to be known, was given a place of honour at the coronation.

aaaaaFor the young peasant girl, however, the triumph was to be short-lived. The following year she led a force against the English at Compiègne, near Paris, failed in her mission, and was captured by Burgundian soldiers. They sold her to the English, their allies at the time, and she was then turned over to an ecclesiastical court at Rouen to be tried on charges of heresy and witchcraft. She was found guilty after a trial lasting four months, but because she confessed her errors, her death sentence was commuted to life imprisonment. However, as she continued to wear masculine dress in jail, she was condemned as a relapsed heretic, and in May 1431 was burned at the stake in the Old Market Square at Rouen. 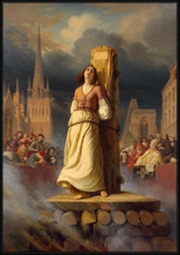 aaaaaTwenty-five years after her death her case was retried, and she was found innocent on the grounds that the original trial had been “irregular”. The retrial was ordered by Charles VII himself, the man whom she had served so well, and the man who did little to help her in her hour of need. A national heroine and the patron saint of France, she was canonized in 1920.

aaaaaWhether in this account of Joan's life one accepts the part played by divine intervention must be a matter of personal opinion, but what she achieved by listening to her “voices” is not in doubt. By defeating the English at Orleans - who, up to then, had been regarded as virtually invincible - and following this up with the coronation of a French king, this teenager gave her people fresh hope and renewed vigour. It was a turning point in the Hundred Years’ War, the beginning of a French fight-back which was to end in the expulsion of the English from French soil.

aaaaaThere is, of course, a danger of exaggerating the part played by this slip-of-a-girl in the history of France at this time, but, by the same token, it is equally dangerous to under-estimate her role in these affairs. It has been said that the true turning point in the long conflict between England and France was the defection of Burgundy. By the Treaty of Arras in 1435 the Burgundians deserted the English and joined cause with the French crown. This was indeed a bitter blow to the English, but would this defection have occurred without the victory at Orleans and, in particular, the crowning of Charles VII? Perhaps that is the question that should be asked. However, as we shall see, whatever the true value of her contribution towards the French victory, the Hundred Years’ War finally ground to a halt in 1453. Both sides licked their wounds, and found new outlets for their national energy.

aaaaaWhat can be said with certainty is that throughout her military mission, imprisonment and trial she showed an incredible amount of physical and mental courage, and an amazing degree of piety. For these qualities alone she will always have a place as one of the most incredible and enigmatic figures in world affairs.

aaaaaIncidentally, as one would expect, Joan of Arc has provided a fascinating subject for a vast number of writers, painters and sculptors - not to mention filmmakers. Among these are the German dramatist Johann von Schiller, and the British playwright George Bernard Shaw; the French philosopher Voltaire in his narrative poem La Pucelle d’Orleans of 1756; the American writer Mark Twain in a biography entitled The Personal Reflections of Joan of Arc (1896); and the French sculptor François Rude. ……

aaaaa…… The spot where Joan of Arc was

burned at the stake in the old market square in Rouen is today marked with a large silver cross. St. Sauveur’s Church, which stood nearby and was the parish church of the dramatist Pierre Corneille, was destroyed around 1833, and the church that replaced it, Saint Vincent’s, was badly bombed during the Second World War. The present building, the Church of Saint Joan of Arc, was completed in 1979. Designed by the French architect Louis Arretche, it follows local tradition, and is built in the form of an upturned boat. The thirteen stained glass windows are from the 16th century, having been removed from St. Vincent’s and stored away before the bombing began. The statue of Joan of Arc outside the church was the work of French sculptor Maxime Real del Sarte and dates from 1926.

xxxxxCharles VII of France (1422-1461) became Dauphin in 1417, but the Treaty of Troyes three years later made Henry V of England the heir to the French throne. However, with the aid of Joan of Arc, he defeated the English at the Battle of Patay in 1429, and was crowned king at Reims the same year. In 1435, when the Burgundians deserted the English and made peace, Charles reorganised his army and went on the offensive. By 1453 the English had been driven out of all of France except for the port of Calais. 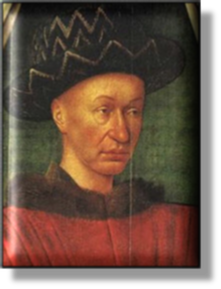 aaaaaCharles VII was king of France from 1422 to his death in 1461. He became Dauphin in 1417, but three years later Henry V of England concluded the Treaty of Troyes with his father, Charles VI, and with the Duke of Burgundy, whereby he and his successors became heirs to the French throne. Thus when Charles VI died in 1422, Charles only inherited the southern part of his country. However, the arrival on the scene of Joan of Arc in 1429 proved a turning point. With the defeat of the English at the siege of Orleans and the Battle of Patay, he was crowned king at Reims in July of that year. Later, when the Burgundians agreed to make peace in 1435, and Paris was recaptured the following year, the unity of France became a real possibility. (The portrait is by the French artist Jean Fouquet.)

aaaaaAlthough not the most dynamic of monarchs, Charles was skilful at court intrigue, and was thus able to set in motion a number of important internal reforms. He introduced a system of taxation which gave him a large measure of financial independence, and he encouraged trade. Given increased funds he was thus able to establish a permanent, more efficient army, and to go on the offensive. By 1453 he had driven the English out of all of France save the port of Calais. For this accomplishment alone he must be seen as one of the most important monarchs in French history. 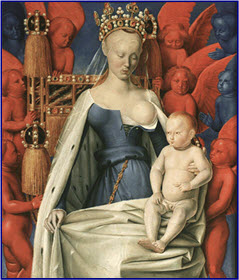 aaaaaThe portrait of Charles VII above was the work of the French painter, miniaturist and illuminator Jean Fouquet (c1420-c1481), one of the leading artists of his day. Born in Tours, he probably received his training in Paris, but he later studied Renaissance art in Italy, probably from 1443 to 1447. This influenced a number of his religious paintings, notably his powerful Melun Diptych (a two-tablet altarpiece), completed around 1450 for the city’s cathedral. His Virgin and Child, (illustrated here), formed part of this work, and is now in the Fine Arts Museum in Antwerp. The face of the Virgin was probably based on his portrait of Agnes Sorel, one of Charles VII’s mistresses. But despite his interest in Renaissance art, much of his style was in the northern tradition, influenced in particular by the Flemish artists Jan Eyck and his brother Hubert.

aaaaaSuch was the quality of his work that he was appointed court painter to both Charles VII, in 1448, and to his successor, Louis XI, in 1475. His portraits showed a firmness of line, the use of strong colours, and his ability to capture the character of his sitter. While in Rome, where his artistic skills were much admired, he painted the portrait of Pope Eugene IV, but this work was later lost. His known paintings depicted religious themes - like his Virgin and Child Surrounded by Angels and his large altarpiece of the Pietà - but Man with a Glass of Wine, to be seen in the Louvre, Paris, might well have been by his hand.

aaaaaIllustrated below are a detail from his Pietà, a Self-Portrait, and St. Marguerite, a miniature from The Book of Hours of Étienne Chevalier.

xxxxxThe French artist Jean Fouquet (c1420-c1481) was court painter to both Charles VII and his successor Louis XI. Apart from portraits in the northern tradition, he produced a number of religious paintings influenced by his study of works from the Italian Renaissance. These included his Melun Diptych, (an altarpiece) completed around 1450, and Virgin and Child Surrounded by Angels. In addition, he produced a large number of exquisite miniatures, some for three Books of Hours, and his brilliant illuminated manuscripts were highly prized, particularly those for The Decameron, the masterpiece of the Italian writer Giovanni Boccaccio. Man with a Glass of Wine (in the Louvre) may have been by his hand.

aaaaaAnd in addition to his portraits and paintings, he produced a number of finely executed and detailed miniatures, sixty of which were contained in one of his masterpieces, the large Book of Hours, produced during the 1450s for Étienne Chevalier, the royal secretary and lord treasurer. Noteworthy, too, was his rich illumination of a number of manuscripts, including two French translations from the witty stories of The Decameron, the masterpiece of the Italian writer Giovanni Boccaccio.