xxxxxThe capture of Jerusalem in 1099 after a siege lasting more than a month was the culminating victory of the First Crusade. To administer the conquered territories the Kingdom of Jerusalem was formed. Godfrey de Bouillon became its first ruler with the title Defender of the Holy Sepulchre, followed by his brother Baldwin I in 1100. It was a great victory for the Christians but, as we shall see in 1187 (H2), less than ninety years later, Jerusalem would again be in the hands of the "Infidel". 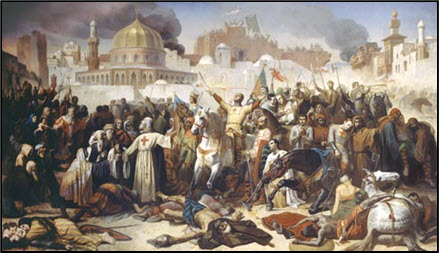 xxxxxThe capture of Jerusalem in 1099, the culminating victory of the first Crusade, was not accomplished without a great deal of toil and bloodshed. The city was besieged for more than a month, and the crusaders were obliged to build siege towers and ladders to scale the heavily fortified walls. Eventually a breach was made in the city wall, the Christian soldiers poured through the gap, and there followed a terrible massacre of the Muslims and Jews. Once the city was safely in their hands, the Crusaders flocked to the church of the Holy Sepulchre to give thanks to their God for their victory and for the restoration of the Holy City to Christendom. Andxtheir hold on the city was confirmed less than a month later when at the Battle of Ascalon the Crusaders defeated an Egyptian army sent to recapture the city. 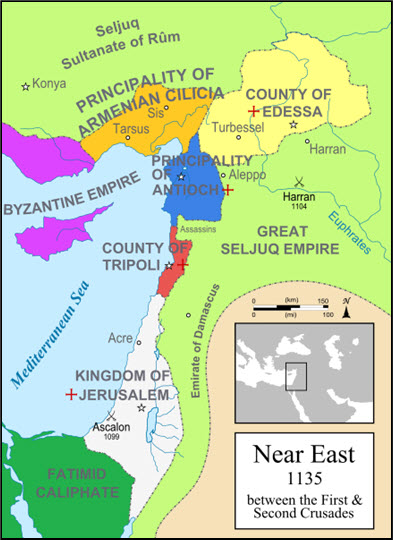 xxxxxGodfrey de Bouillon, Duke of Lower Lorraine, became the first ruler of the Kingdom of Jerusalem, with the title of Defender of the Holy Sepulchre, and on his death in 1100 his brother Baldwin of Flanders succeeded him, taking the royal title of Baldwin I. It seemed that victory was complete, and so it was for the moment, but the Christians were not the only ones who could wage a Holy War. As we shall see, in less than ninety years, (1187 H2), Jerusalem would again be in the hands of the Saracens.

xxxxxIncidentally, as we have seen, the Italian Renaissance poet Torquato Tasso wrote about the recapture of Jerusalem in his epic masterpiece Gerusalemme Liberata. The first complete edition of this work was published in 1581.