xxxxxFollowing a claim by a Captain Robert Jenkins that, while trading in the Caribbean, a Spanish boarding party had seized his cargo and cut off one of his ears, the British chief minister, Robert Walpole, reluctantly declared war on Spain in October 1739. The "War of Jenkins’ Ear", as it was called, started well for the British, mainly due to the exploits of Admiral Edward Vernon, who captured and destroyed the Spanish settlement of Portobello in 1739. However, his fame rests mainly on the fact that it was he who introduced the issue of rum-and-water (known as "grog") to members of his crew, a practice which was adopted throughout the Royal Navy. In little more than a year, the war over Jenkins’ severed ear merged into the larger, European conflict, the War of the Austrian Succession, beginning in December 1740.

xxxxxThe War of Jenkins’ Ear arose out of smuggling on the part of British merchant seamen. The Treaty of Utrecht of 1713, which concluded the War of the Spanish Succession, had permitted British trade with Spanish colonies in America, but only on a restricted basis. As a result many British traders had resorted to smuggling, including a seaman named Captain Robert Jenkins. In 1731 his vessel, Rebecca, was boarded by members of a Spanish coast guard vessel off the coast of Jamaica. By all accounts, they not only confiscated his cargo, but also cut off one of his ears! 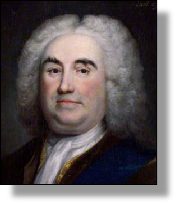 xxxxxThe incident was seen as a minor affair at the time, but following further reports of British seamen being maltreated - though not, it would seem, in a similar fashion - Jenkins brought his pickled ear to London and it caused quite a stir! Indeed, such was the public outcry that in 1738 he appeared before a committee of the House of Commons with the severed ear, and the matter then became the subject of an angry debate in Parliament. Here, as one would expect, politics played a part. The opponents of the chief minister, Robert Walpole (illustrated), knowing of his strong opposition to waging war, called for just that. By the following year the demand for revenge had become so loud that - dare one say it? - Walpole could no longer turn a deaf ear. He eventually and reluctantly declared war on Spain in October 1739. As the discussion in parliament had been under the title "Debate on Jenkins’ Ear", it is perhaps not surprising that the conflict became known as the "War of Jenkins’ Ear".

xxxxxThe opening shots of the conflict, which went well for the British, were confined to the New World, and included an attack and counter-attack along the Florida-Georgia border. In little more than a year, however, the struggle had merged into the larger, European clash of arms - the War of the Austrian Succession, breaking out in December 1740.

xxxxxIncidentally, as one might expect, a measure of scepticism surrounds the story of Captain Jenkins’ pickled ear. There are those spoilsports who would suggest that the worthy captain actually lost his ear during a tavern brawl! We will never know. 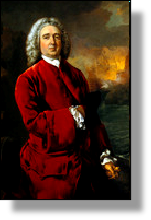 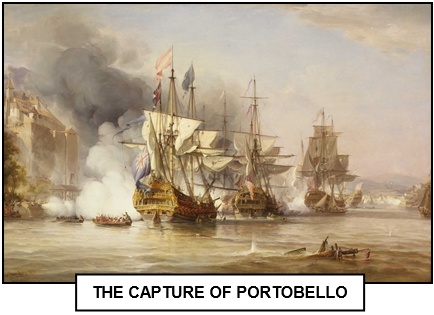 Ear started off so well for the British is due in large part to the exploits of Admiral Edward Vernon (1684-1757). Notable among these was his capture and destruction of the Spanish settlement of Portobello in November 1739. Situated in today's Panama, this town was rebuilt in 1751, but never regained its former importance as a trading post. Vernon later suffered several defeats and these tended to take the shine off his earlier accomplishments.

xxxxxIncidentally, despite his later failings, Vernon was destined to be fondly remembered by generations of British seamen over the next two hundred years and more. Because of his custom, when afloat, of wearing a coat made of a coarse, wiry fabric (called grogram), he earned the nickname "Old Grog". A shortened version, "grog", then became applied to the measure of rum-and-water which he issued daily to members of his crew. This practice - actually introduced to control drinking and thus reduce drunkenness - was adopted throughout the British Navy. ...... 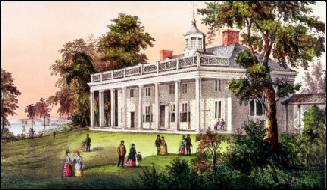 xxxxx...... The family estate of the American President George Washington, Mount Vernon in Virginia, was named after him. Lawrence, Washington's elder half-brother, acquired the plantation in 1740, and named it Mount Vernon in honour of Admiral Vernon under whom he had served in the Caribbean. Washington inherited the property on Lawrence's death in 1751, and he lived there, on and off, until his death in 1799. The estate, which overlooks the Potomac River and is situated about 15 miles south of Washington D.C., is Washington's burial place and, today, serves as a national museum.