THE BATTLES OF JENA AND AUERSTADT - October 1806

xxxxxAs we have seen, after his victories over the Austrians and Russians at the Battles of Ulm and Austerlitz in 1805, Napoleon set up the Confederation of the Rhine, a union of German states firmly under French protection. Alarmed at this development, and having made a secret alliance with Russia, in October 1806, King Frederick William III of Prussia declared war on France and, without waiting for the support of his ally, sent two armies into Saxony. Napoleon, splitting his own army into two, met the two forces at Jena and Auerstadt in mid-October 1806. In a matter of hours both of the Prussian-Saxon armies - ill-trained and outdated - were smashed by the Grand Army. So complete was the rout that Napoleon was able to march on Berlin and enter the capital later that month. As we shall see, for the king’s foolhardy action, the Prussians were to pay a heavy price at the Treaty of Tilsit, held in 1807 after Napoleon had defeated the Prussians and Russians at the Battles of Elau and Friedland. 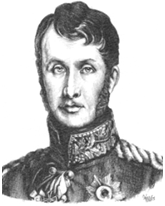 xxxxxAs we have seen, following his decisive victories over the Austrians and Russians at the Battles of Ulm and Austerlitz in 1805, Napoleon consolidated his position in central Europe by forming the Confederation of the Rhine, a loose union of German states firmly under French protection. This extension of French power right up to the Prussian border was more than King Frederick William III (Illustrated) was prepared to accept. Making a secret pact with Russia in July 1806, he abandoned Prussia’s neutral policy - followed since withdrawing from the French Revolutionary Wars in 1795 - and declared war against France in the October. His confidence in this alliance, and in the ability of his own armed forces, proved entirely misplaced. Russia took too long in coming to his aid, and the Prussian and Saxon armies, ill-trained and ill-equipped, were hardly a match for Napoleon’s Grand Army. Prussia was to pay a heavy price for their untimely re-entry into the affairs of Europe.

xxxxxFacing his new enemy - the only major power in central Europe which had not been overpowered by France - Napoleon wasted no time. In October 1806 he moved his army north from Wurzburg - where it had been resting - and received news en route that the Prussians had divided their force. The Duke of Brunswick, the Prussian commander, was heading for Naumberg with some 63,000 men, whilst another force, commanded by Prince Hohenlohe and numbering about 51,000 was moving towards 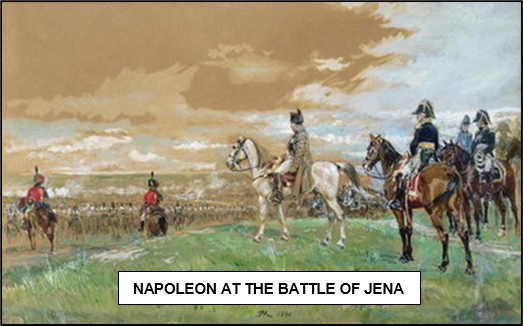 Jena. Napoleon likewise split his army in two, sending a small force of 27,000 troops near to Auerstadt in order to hold the Duke of Brunswick at bay, and keeping the remainder of his army, some 56,000, deployed at Jena (about 50 miles south-west of Leipzig) to face Prince Hohenlohe.

xxxxxNapoleon’s plan was to crush the enemy force at Jena and then swing his army 13 miles north to join up with his smaller force at Auerstadt, ready to take on the Duke of Brunswick. There proved to be no need for such a manoeuvre. The two Prussian armies, neither well-trained or experienced, were simultaneously routed in both locations. Some 20,000 of their men were captured, 24,000 were killed or wounded, and 200 guns were lost. Among the dead was the Duke of Brunswick. French casualties were just 12,000. So complete were these victories that the Prussian resistance was totally broken, and Napoleon was able to march on Berlin, entering the capital towards the end of October.

xxxxxAs we shall see, Napoleon then went on to defeat the Russians and Prussians at the Battles of Elau and Friedland in 1807, and this forced both Russia and Prussia to sue for peace. At the humiliating Treaty of Tilsit that year, the Prussians were made to pay an extremely high price for their foolhardy policy. Had they joined the Third Coalition earlier, combining their forces with those of Austria and Russia in 1805, for example, it might well have stopped Napoleon in his tracks or, at least, limited the extent of his advance. As it was, they chose to ally themselves with the Russians in 1806 - while they were still licking their wounds from the Battle of Austerlitz - and then take on the might of France, the conquerors of Europe, single-handed. It was a recipe for disaster and this is exactly what they suffered. Indeed, few nations have suffered a military disaster of such magnitude.

xxxxxIncidentally, Frederick William III of Prussia was the man who instituted the military decoration known as the Iron Cross. It was first awarded for distinguished service in the Prussian War of Liberation (against the French in 1813-14) and revived by William I for the Franco-Prussian War of 1870. It was recreated for the First World War of 1914 to 1918, and then re-instituted by the German fuehrer Adolf Hitler on the first day of September, 1939, the day that the German army invaded Poland.

xxxxxCongreve rockets were first used successfully by the British during an attack on the French naval base at Boulogne in October 1806, the month when the Battles of Jena and Auerstadt were fought. They were designed by an artillery officer, William Congreve, and were based on a crude but effective weapon which had been used against the British in 1792 and 1799 (G3b) during the Anglo-Mysore Wars in India. Congreve’s rocket was some 40 inches in length, weighed 32 lbs, and had a range of about 2,000 yards. They were used to devastating effect upon the port of Copenhagen in 1807, and also played a part in the Battle of Waterloo. As we shall see, they were later used to good effect during the War of 1812. Improved over the years, and being easy to launch and transport, most European armies adopted similar weapons, but by the mid-19th century improved guns with rifled bores were coming into use, and the rocket could not compete regarding explosive power and accuracy. However, they continued to be employed in swampy or mountainous regions, and they were used in the Mexican War and the American Civil War.

xxxxxIt was in October 1806, at the time of the Battles of Jena and Auerstadt, that the British first used Congreve rockets to good effect. They were employed in an attack on the French port of Boulogne and, light to handle and easy to launch, they proved highly successful in destroying many of the invasion barges moored in the harbour. 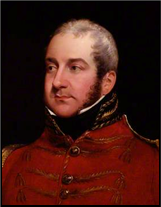 xxxxxAs we have seen, the British learnt about rockets to their cost when they were used against them by Tippu Sahib during the third and fourth Anglo-Mysore Wars in India. Improving upon the version developed by his father Hyder Ali, and, so we are told, increasing his corps of “rocket throwers” to 5,000, he used them successfully in the battles for Seringapatam in 1792 and 1799 (G3b). Axfew years later, the use and effectiveness of these rockets as a terror weapon came to the notice of a young artillery officer named William Congreve (1772-1828) (illustrated). In 1805, using a metal cylinder, like Hyder Ali, he designed a 40 inch rocket which, provided with a stabilising stick about 16ft long and weighing around 32 lbs, had a range of nearly 2 kilometres (about 2,000 yards). The weapon could be fired so as to skim along at ground level, but he also built the first reliable launching “pad”, based on A-form ladders, for aerial bombardment.

xxxxxLater refinements followed. By trimming the length of its fuse the warhead could be timed to explode at a required distance, and two types of charge were introduced - ball shot for maximum damage among advancing troops, and an incendiary compound to set fire to wooden targets, such as ships. Then in 1815 Congreve substantially improved his invention by abandoning the side-stick mounted rocket and fixing the guide stick along the central axis. This greatly increased accuracy and range (up to two miles) and also enabled the rocket to be launched from a thin copper tube. 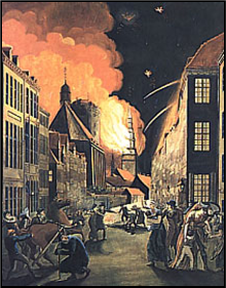 xxxxxFollowing their success at Boulogne, Congreve rockets proved highly successful the following year (1807) when, launched in their thousands, they virtually destroyed the centre of the city of Copenhagen (illustrated), and the French fleet that was sheltering in its harbour. Similar rockets were later used in the Battle of Waterloo, and, as we shall see, they were employed on numerous occasions during the War of 1812 against the United States. Such were their success that within a few years almost every country in Europe had made similar rockets, and formed specialised brigades as part of their artillery units. Whilst they were not very accurate, such rockets were a useful terror weapon and, compared with conventional guns, were lighter in weight, simpler to “fire”, and far easier to transport.

xxxxxLater,xin 1844, an English engineer named William Hale (1797-1870) devised a means of spinning the rocket to stabilise it in flight, and he was thus able to do away with the cumbersome guide stick. By this time, however, improved guns with rifled bores were coming into use and the rocket, although gaining much in performance, could not compete. It continued to be used, however, in mountainous regions or swampy conditions where guns and mortars were too heavy. For example, the Austrian army used Hale rockets when fighting in the mountains of Hungary and Italy, and they were 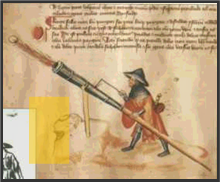 used in both the Mexican War and in the American Civil War.

xxxxxIncidentally, as noted when covering the Fourth Anglo-Mysore War in 1799 (G3b), the Chinese probably used crude rockets as early as 1232 when fighting the Mongols. Later the Arabs are thought to have used them in Spain in the 13th century, and the Paduans and Venetians in the following century. ……

xxxxx…… Upon the death of his father in 1814, Congreve inherited his father’s baronetcy and was appointed comptroller of the Royal Laboratory at Woolwich Arsenal. He was the Member of Parliament for Plymouth, in Devon, from 1818 until his death in 1828.