xxxxxWhen a dispute over the imperial succession broke out in Japan in 1156, two ruling families, the Taira and the Minamoto, took opposing sides. Three years and two brutal wars later, the Taira emerged the victors. Over the next 20 years the Taira consolidated their power, but with the death of their military dictator in 1181, a revolt, led by the Minamoto family, totally destroyed the Taira, first on land and then at the great sea battle of Dannoura in 1185. Within a few years, as we shall see (1192 R1), the new leader, Yoritomo, had introduced the shogunate system, a regime which was to be the form of government in Japan until well into the 19th century. 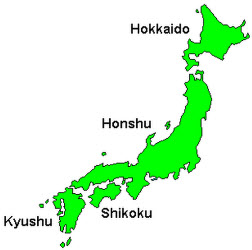 xxxxxFor close on thirty years (1156 to 1185) the Taira family wielded great power and influence at the Imperial Court of Japan. Originating as a clan in about 825 and claiming kinship with the 50th emperor, they at one time controlled the whole of Kanto district in central Honshu. In the early eleventh century, however, their influence began to decline, and they fell under the authority of the Minamoto family, a clan also claiming descent from an earlier Emperor.

xxxxxThe opportunity to regain their former power and influence came in 1156 when the Emperor's brother laid claim to the throne, and the two families, the Taira and the Minamoto took opposing sides. Two brutal wars followed, known as the Hogen and the Heiji Disturbances, and in 1159 the Taira family emerged victorious. Over the next twenty years the Taira consolidated their power. By 1179 its military leader, Kiyomori, had become virtual dictator of Japan, his rule becoming known as the Rokuhara regime, after the place where he lived in Kyoto. 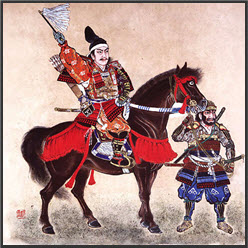 xxxxxWith the death of Kiyomori in 1181, however, opposition to the Taira tyrants resurfaced throughout the land. As one might expect, the revolt was led by the Minamoto family under its leader Yoritomo (illustrated). He called upon the support of the samurai from the outer provinces and the Taira proved no match for these tough professional soldiers (a military caste employed by the great landowners). The Taira fled from Kyoto with the young emperor - who happened to be the grandson of Kuymori - but were hotly pursued and defeated in two successive battles, one at Ichinotani and the other at Yashima Island. Thexremnants of the Taira forces then fled further west, but in 1185 were totally destroyed at the great Sea Battle of Dannoura in the strait which separates the islands of Kyushu and Honshu.

xxxxxSupreme authority now passed to the Minamoto family, and a new power-base was established by its leader Yoritomo. Within a few years, as we shall see (1192 R1), he had founded a military government at Kamakura and introduced the shogunate system, a regime whereby hereditary feudal lords (shoguns) governed the entire country and the emperor was but a figurehead. It was the form of government which was to survive in Japan until well into the nineteenth century.

xxxxxIncidentally, the young Emperor Antoku was drowned at the sea battle of Dannoura. It is said that he took with him one of the most prized imperial treasures of Japan, a great sword which bestowed divine authority upon the emperor and, according to legend, had been brought down from heaven by the first emperor.