xxxxxThe Flemish artist Jan van Eyck, one of the first painters to use oils, was a miniaturist by training. This accounts for his attention to detail, and the brilliance of his colouring. After some experimenting, he obtained a high gloss effect by applying a series of thin glazes. His themes were generally biblical, but he did paint a number of portraits. His masterpiece is considered to be his The Adoration of the Lamb, an inner panel of an altarpiece he painted for Saint Bavo Cathedral in Ghent in 1432. A number of his works are in the National Gallery in London, including Man with a Turban of 1433, possibly a self-portrait. His work influenced artists across Europe. He also worked as a diplomat, sometimes on secret missions.

aaaaaThe Flemish artist Jan van Eyck was one of the first painters to use oil paint successfully, and this was a major break-through in the world of art. A miniaturist by early training, his work is therefore noted for its attention to fine detail, and the brilliance of its colouring. There is uncertainty about the authenticity of some of the work attributed to him, mainly due to doubts about the exact contribution made by his elder brother Hubert, but a number of paintings are certainly by his hand alone. 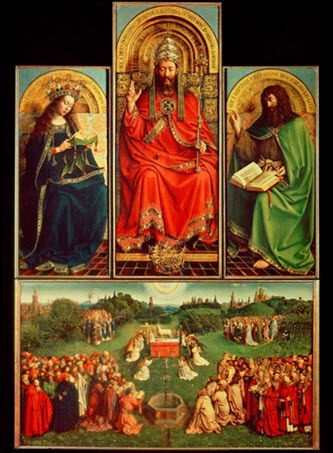 aaaaaOil painting was already in existence at this time, known as the egg-tempera technique. Indeed, we are told that the Romans in the first century AD were using such a material to paint their shields! But it was Jan, possibly with the aid of Hubert, who did so much to improve the subtlety of tones and depth of colour, and thus establish oil as a viable medium. It was his handling of the paint rather than the paint itself which brought about the biggest improvement. Greatly assisted by his skill as a miniaturist and illustrator, he obtained the high gloss and brilliance of colour by using thin glazes of oil paint to build up a series of transparent layers.

aaaaaHis subject matter was generally biblical and, as he regarded God and nature as one, there is a great deal of religious symbolism in his work. In addition, however, he was among the earliest artists to paint portraits, and his work in this field has also been much admired. He was probably born in Maaseik, and he worked in The Hague as a miniaturist for over three years before entering the service of the powerful Duke of Burgundy.

aaaaaHere, as well as the court painter, he worked as a diplomat, sometimes on secret missions. In 1428 he combined his two offices when he went on a visit to Portugal to paint the king’s daughter, Isabella, so that the Duke could see what she looked like before committing himself to marriage! The Duke studied the portrait and agreed to marry the Princess.

aaaaaEyck set up home in Bruges around 1430, and was soon in demand as a portrait painter by the wealthy merchants and town notables. Among his portraits were the Madonna with Chancellor Rolin and the Madonna with Canon van der Paele. Also of this period is the altarpiece which includes the inner panel The Adoration of the Lamb, probably completed around 1432 and considered to be his masterpiece (illustrated above). The altarpiece was commissioned for Saint Bavo cathedral in Ghent, and it is possible that Hubert - of whom little is known - produced some of the earlier panels before his death in 1426, and that Jan then assembled them after completing most of the work himself. 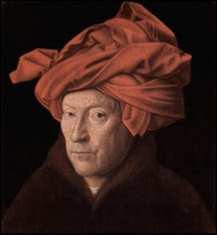 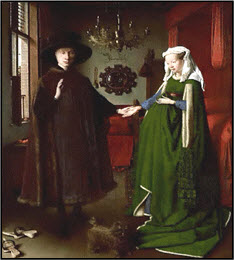 aaaaaThere are a number of works by Jan van Eyck in the National Gallery, London. Illustrated here are the Man with a Turban (1433) - a possible self portrait - and Giovanni Arnolfini and his Bride (1434). The latter painting is full of religious symbolism. The green of the dress, for example, represents fertility. His influence can be seen not only in northern Europe, where he ushered in the Renaissance, but also in Italy, Spain and Portugal. In his homeland, he awoke a lively interest in art by his use of vivid colours, his creation of depth, and, above all, his incredible attention to detail, be it in his interiors, landscapes or portraits. Among his fellow countrymen these qualities earned him the title of “King of Painters”.

xxxxxThe artist Rogier van der Weyden (c1399-1464), also Flemish, was much influenced by the work of Jan van Eyck, as can be seen in his St. Luke Painting the Virgin. He produced mainly altarpieces, and these were remarkable for their simple composition and religious intensity, particularly so in his Annunciation and his three versions of the Crucifixion. His finest painting was his Descent from the Cross (now in the Prado, Madrid). Its brilliant composition, gilt background, intensity of colour and the anguish it portrays, make it one of the greatest works of the 15th century. He spent most of his life in Brussels, but in 1450 he visited Rome where his Madonna and Child was commissioned by the Medici.

aaaaaThe artist Rogier van der Weyden (c1399-1464), a fellow countryman, was much influenced by the work of Jan van Eyck. Born in Tournai, he was for a time a pupil of Robert Campin, the town’s foremost painter. During the years 1432 to 1435 he worked in Bruges, where he would undoubtedly have met Eyck and become acquainted with his work. Eyck’s influence is clearly to be seen in his St. Luke Painting the Virgin (illustrated below). In 1436 he was appointed official painter for Brussels and from then on, apart from a short visit to Rome, he spent the rest of his life in that city.

aaaaaLike Eyck, most of his work is confined to altarpieces, but he did produce some small icons of Christ and the Virgin and Child, as well as a number of fine portraits. His work is elegantly simple in composition, and his detailed figures are sensitively portrayed. A deeply religious intensity pervades his work, and this is particularly so in his Annunciation (now in the Prado, Madrid) and his three versions of the crucifixion (one illustrated below). 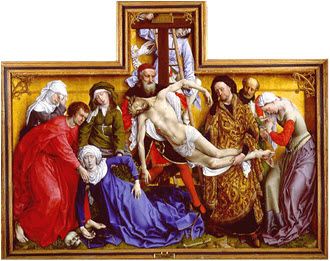 aaaaaHis Descent from the Cross (The Deposition) painted around 1435 - also in the Prado - is particularly remarkable for its structured composition and its gilt background (illustrated here). The anguish expressed in this altarpiece is immense, and, with its composition, makes it one of the greatest paintings of the 15th century.

aaaaaIn 1450 he paid a visit to Rome and was very well received. While in Italy, he demonstrated the technique of painting in oils, and gained commissions from the wealthy Este family of Ferrara and the Medici of Florence. His Madonna and Child, now in the Uffizi museum, was commissioned by the Medici. After his visit to Italy his style did become softer in tone and more natural in form, as can be seen in his Adoration of the Magi, but he still remained intent on a rather iconic approach.

aaaaaIncidentally, such was the esteem in which his work was held, that at the Treaty of Versailles, the peace settlement which followed the end the First World War (1914-18), one of the clauses stated that the “Ghent Altarpiece”, stolen from Belgium by the Germans, had to be returned before peace could be concluded.

Left to Right: Adoration of the Magi, Crucifixion, and Saint Luke painting the Virgin.

aaaaaWeyden ended his days as a wealthy and famous artist, with a large workshop, numerous pupils and a constant flow of commissions. His work had a marked influence on later Flemish painters, such as Dirck Bouts and Hans Memling, and it was also felt in the artistic circles of Germany, France, Italy 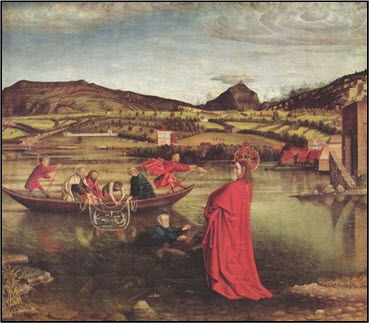 aaaaaDeserving a mention here is the German-Swiss painter Konrad Witz (1400-1445). He worked most of his life in Basel (or Basle) and was much influenced by the realistic style of the Flemish painters. The work for which he is best known is the Saint Peter Altarpiece, completed in 1444. Only two panels have survived, but one, The Miraculous Draught of Fishes (illustrated), is of special interest because it is one of the first examples in Western art where the painter has set his subject against a recognisable landscape: Lake Geneva. This work is now in the Museum of Art and History in Geneva.