xxxxxAs we have seen, it was not until 1860 (Va), with the unity of north and south, that Italy was able to establish its independence. In March 1861 Victor Emmanuel II, king of Piedmont-Sardinia, was proclaimed king of Italy, but two areas remained outside the new state. Venetia, for long under Austrian control, was eventually incorporated into the new state by the settlement which concluded the Austro-Prussian War in 1866, but Rome, the last of the Papal States, remained in the hands of the Pope and was defended by a French garrison dating from 1849. This proved a stumbling block to outright unification. It was not until 1870, when Napoleon III withdrew this garrison to defend France against a possible Prussian attack, that Victor Emmanuel was able to take over the city. This was strongly opposed by the then Pope, Pius IX. Despite a Law of Guarantees giving him independence and authority within the Vatican (where he had taken refuge), he refused to recognise the Italian state, and demanded the return of the Papal States. As a result he and his successors remained “prisoners of the Vatican” and this so-called “Roman Question” was not resolved until the Lateran Treaties of 1929. 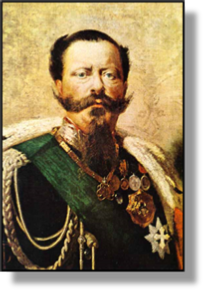 xxxxxIt was in 1859 (Va), as we have seen, that Sardinia-Piedmont, assisted by the French, defeated the Austrians at the Battles of Magenta and Solferino and, save for Venetia, drove them out of northern Italy. Then the following year saw the conquest of the Two Sicilies (Sicily and Naples) by the Italian patriot Giuseppe Garibaldi (1860 Va), and, in central Italy, the defeat of the papal army at the Battles of Castelfidardo and Ancona. All the papal territories were seized except for Latium, the region around Rome. Thus by the end of the year the Italian peninsula had been welded together, with independence achieved. At Turin In March 1861 Victor Emmanuel II, king of Piedmont-Sardinia (illustrated) was proclaimed king of a united Italy. By then only Venetia and Rome remained outside the new kingdom. 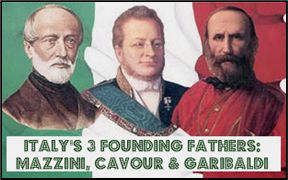 xxxxxFive years later Venetia was incorporated into the Italian state by the settlement which concluded the Austro-Prussian War in 1866, but the fate of Rome remained in the balance. The city had been under the protection of the French since 1849. It was in that year that France’s new president, Louis Napoleon (later Emperor Napoleon III) had sent troops to Italy to restore Pope Pius IX as ruler of the Papal States following his overthrow by the Italian revolutionaries Mazzini and Garibaldi. Carried out by Napoleon in order to gain the support of the Catholics and Conservatives at home, these troops remained as guardians of the Pope for over 20 years, and proved a stumbling block to the final unification of Italy. This eventually came about in 1870. With the outbreak of the Franco-Prussian War in July of that year, Napoleon was obliged to withdraw his garrison from Rome to strengthen home defences. 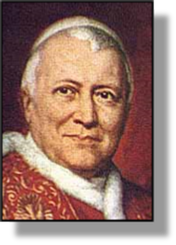 xxxxxFollowing the decisive defeat of the French at the Battle of Sedan at the beginning of September, Victor Emmanuel seized the opportunity to get rid of the last vestige of the Papal States. However, Pope Pius IX (1792-1878) (illustrated) refused to surrender up the city peacefully, and an invasion was planned. After a symbolic show of resistance by the small papal army, Italian troops breached the city’s wall at Porta Pia on the 20th September and took over the city. Rome and Latium were incorporated into the Italian state, and Rome was made the capital of the new kingdom in July 1871.

xxxxxIn May 1871, in an attempt to establish a working relationship between Church and State, the government promulgated the Law of Guarantees. In brief, this guaranteed the pope’s occupation of the Vatican (where Pope Pius had taken refuge), guaranteed him full liberty in his religious and diplomatic functions, afforded him sovereign status, and provided the papacy with a substantial annual income. But Pope Pius would have none of it. He argued that a law passed by the Italian Parliament could be as easily abrogated as passed. Furthermore, he remained totally opposed to the occupation of his sovereign territory, Rome and all the former Papal States.

xxxxxAs a result, he and his successors chose to become "prisoners of the Vatican" and, for the next 47 years, they prohibited Roman Catholics from taking part in the Italian government. It was not until 1929, close on sixty years later, that this stand off - the so-called Roman Question - came to an end. In February 1929 three Lateran Treaties recognised the full sovereignty of the Vatican city state, clearly defined its borders, and established the Roman Catholic Church as the state church of Italy. In addition the Vatican was awarded a huge indemnity for the annexation of the Papal States.

xxxxxIncidentally, in July 1870, the day before the outbreak of the Franco-Prussian War, the Vatican Council made the ancient doctrine of papal infallibility into a dogma of the Roman Catholic Church. Intended to strengthen the influence of the Church at a time of social and political unrest, it held that, by the action of the Holy Spirit, the Pope was incapable of making an error when pronouncing on doctrinal or moral matters. ……

xxxxx...... VictorxEmmanuel never took the title of King of Italy. To the disappointment and annoyance of many, he retained his earlier title Victor Emmanuel II, acquired in 1849. Nevertheless he was known by the Italians as “Father of the Fatherland”. At his death in 1878 he was succeeded by his son Umberto I. A staunch conservative, he was assassinated in 1900 following a troubled reign. ……

xxxxx…… The new kingdom of Italy faced many problems over the next fifty years or more. The Pope refused to recognise the Italian state, there was a great deal of lawlessness throughout the country, and the economy was weak. Faced with debt and the lack of industry to create wealth, there was a series of liberal coalitions, each unable to form a clear cut majority in the interests of decisive government.