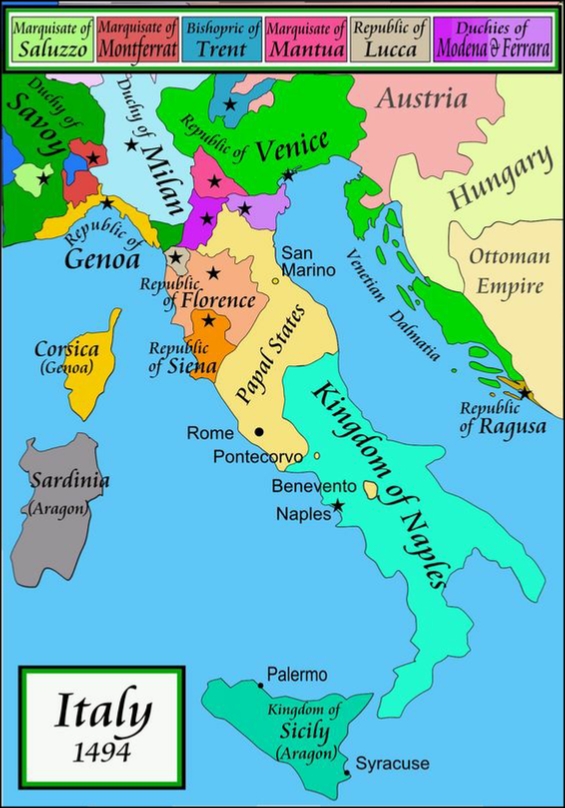 xxxxxThe year 1494 saw the beginning of a series of wars between the Habsburgs, rulers of Spain and the Holy Roman Empire, and the Valois kings of France over who was to control Italy, then made up of a jigsaw of small but - in many cases - wealthy states. Known as the Italian Wars, they opened with a French invasion under King Charles VIII. He expelled the Florence ruler Piero de’ Medici, and entered Rome, forcing the pope to take refuge in the Castle of St. Angelo. In 1495 he was crowned King of Naples and then, on his return to France, laid claim to Milan. His successor, Louis XII of Orleans (1462-1515), captured Milan in 1500, and for a time occupied Genoa, but lost Naples to the Spanish at the Battle of Cerignola in April 1503. Eventually at the Battle of Novara in 1513 his army was soundly defeated by the Swiss - then supporting the Pope - and he was forced to withdraw his troops from Italy.

xxxxxMeanwhile, the Spanish were gaining ground under their General Gonzalo Fernandez De Cordoba. Having defeated the French at Cerignola, they took over Naples, and by 1504 had brought the whole of southern Italy under their control. This was followed by further fighting in the north, but in 1508, to meet a supposed threat from Venice, the League of Cambrai was formed between France, Spain, the Empire and the Papacy. By 1509 this coalition had won the Battle of Agnadello and conquered all of the city state's territory on the mainland.

xxxxxHowever, as we shall see (1525 H8), this League quickly fell apart, and Venice eventually recovered its lost empire. It then became the turn of the Habsburgs to attempt to seize control of northern Italy. Not until the nineteenth century, in fact, was Italy to be freed from some form of foreign occupation.

xxxxxThe year 1494 saw the beginning of a series of wars between the Habsburgs, rulers of Spain and the Holy Roman Empire, and the Valois kings of France over who was to control Italy. In that year the French expelled the Medici from Florence and entered Rome. Then in 1504 the Spanish, having defeated a French force, occupied Naples and took control of southern Italy. In 1508 the two sides and the papacy formed the League of Cambrai and attacked Venice. By the following year much of the city's mainland possessions had been conquered. As we shall see, however, (1525 H8), the League quickly collapsed, and then the Habsburgs launched an attack upon northern Italy.