xxxxxAs we have seen, the Irish Catholics broke out in revolt in 1641 (C1) under their leader Rory O’More, and thousands of English settlers were killed or driven out of Ulster. Then in 1648, by a peace settlement, the Roman Catholic Lords came out in support of the crown. Perhaps not surprisingly, Oliver Cromwell wasted no time in taking his revenge. In August 1649, having arrived in Dublin with 10,000 of his New Model Army, he launched a savage campaign of reprisal. The towns of Drogheda and Wexford were particularly singled out for punishment and then, once the revolt had been crushed, he confiscated large areas of the northern provinces. As we shall see (1690 W3), another Catholic rebellion broke out in 1689, but this was to fare no better.

xxxxxAs we have seen, the Irish Catholics, taking advantage of the growing tensions between crown and parliament, broke out in revolt in 1641 (C1) and, under the leadership of their Irish chieftain Rory O'More, thousands of English settlers were driven out of Ulster or put violently to death. In 1648 James Butler, the earl of Ormonde, returned to Ireland as the viceroy of Charles I and, by a peace settlement with the Roman Catholic Lords, secured Ireland's support for the royalist cause - by then in the person of “Charles II”. 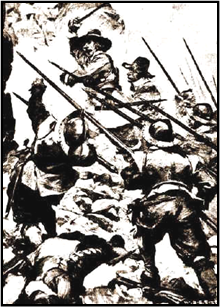 xxxxxIn August 1649, alarmed at the Irish rebellion and its support for the crown, Oliver Cromwell arrived in Dublin with his New Model Army, some 10,000 strong. Having little regard for the Catholic Irish, and mindful of the massacre of English settlers in and after 1641, he carried out a savage campaign of retribution. The towns of Drogheda (35 miles north of Dublin) and Wexford (on the southeastern coast of the island) were particularly singled out for revenge.

xxxxxThe garrison at Drogheda, having refused to surrender, Cromwell launched his attack in the September. The first assault was repulsed with heavy losses, but the second, in which Cromwell played a leading role, succeeded in breaching the walls, and a force of some 7,000 men poured into the city. Revenge quickly followed. Those who had borne arms were swiftly put to death, but also many innocent civilians were slaughtered. It is estimated that during the Massacre of Drogheda some 3,000 perished at the hands of the Protestant army.

xxxxxThe port of Wexford, reached on the 1st October, fared no better, but there Cromwell’s troops had even less excuse for their actions. During lengthy negotiations a young captain in control of Wexford Castle, wishing to avoid bloodshed, took it upon himself to open the castle to the enemy. The Parliamentarians stormed the city and, meeting little resistance, ran amok. Apart from killing the garrison’s soldiers, some 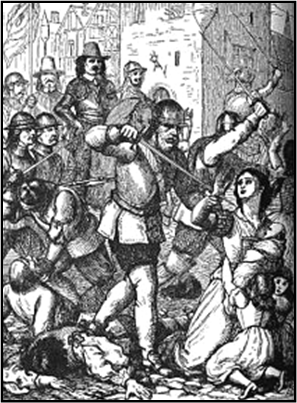 1,500 of the city’s inhabitants were slaughtered in cold blood, including women and children. And priests and friars were singled out for brutal killings.

xxxxxFor Catholic Ireland, the events at Drogheda and Wexford came to be seen as the “Curse of Cromwell”, never to be forgotten. He had certainly fallen below his own high standards as a commander, and his troops had shown no mercy. After Wexford, however, the Irish revolt was virtually at an end. From then on the majority of garrisons, including Cork, offered up no resistance, and by April 1650 over two-thirds of the country was in the hands of the Commonwealth. Before leaving for England, Cromwell confiscated large areas of the northern Irish provinces - including much of Munster, Leinster and Ulster - in order to pay his soldiers and those who had invested in the campaign. With peace procured in Ireland, it was time to govern England.

xxxxxAs we shall see (1690 W3), another Catholic rebellion was to break out in 1689, this time in favour of the deposed James II. It was to fare no better.