xxxxxAs we have seen, the 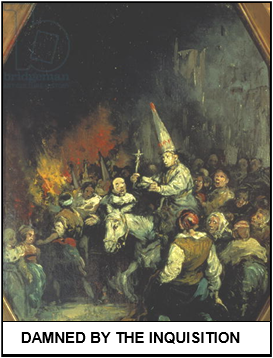 Inquisition - a church court established to combat heresy - was first set up by Pope Gregory IX in 1231 (H3) to combat the Albigensians, an heretical movement in southern France. The accused would be given time to confess his or her sins and seek absolution, but if no confession were forthcoming, then witnesses would be called and, on the strength of their testimony, the verdict would be given. At first, torture was not used to extract confessions, but in 1252 Pope Innocent IV authorised the use of such persuasion, thus adding to the evil reputation of this Church tribunal.

xxxxxOnce the Muslims had been driven out of Spain - save for their territory centred around Granada in the south east - Ferdinand and Isabella, the Catholic Monarchs of Aragon and Castile, were anxious to enforce religious conformity. In 1478, having received the authority of Pope Sixtus IV, they set up their own independent Inquisition. Under the supreme council, presided over by a grand inquisitor, fourteen local tribunals were eventually set up in Spain and similar courts were later established in the colonies of the New World. In the early days the Inquisition was aimed especially at Muslims and Jews who had become members of the Christian church, but were secretly practising their original faiths. Later the target became Protestants and the Alumbrados, a growing movement of Spanish mystics. It is estimated that during the course of the Spanish Inquisition, which was in operation for over 350 years, some 60,000 cases were tried. 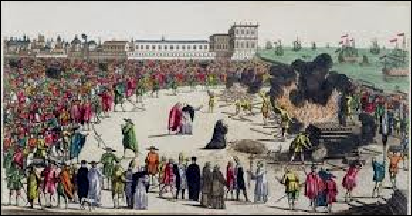 xxxxxThe trials were conducted in secret, often with the use of torture, and penalties varied from fines, imprisonment, flogging, mutilation and death. Suspects were often arrested on the most flimsy of evidence, but very few of the accused were ever acquitted. The ultimate penalty, death by burning, was termed as “relaxation”. The unrepentant heretic was “relaxed” into the hands of the civic authorities and they carried out the sentence. Those heretics who had managed to flee the country were burned in effigy so that the court could then “legally” confiscate their property and possessions. By such means the Inquisition - and thus the state - grew rich.

xxxxxSentences were carried out at an elaborate public ceremony known as the auto-da-fé (the act of faith), illustrated above. These generally lasted for a day, but could go on for much longer. One at Seville in 1660 took three days to complete and involved hundreds of “penitents”. Those sentenced to death could escape being burned alive by making a last minute showing of repentance. They were then garrotted (strangled) instead. These ceremonies proved very popular and were often attended by thousands of spectators.

first Grand Inquisitor was the confessor and advisor to Queen Isabella, the Dominican monk Tomas de Torquemada, a name which has become synonymous with terror and torture. During his tenure of office (1483-1498) it is thought that over 15,000 people were punished and some 2,000 victims were burnt at the stake. He was indeed a cruel and intolerant man but so, in fact, was the Spanish Inquisition as a whole - guided in its first years by the pious Isabella. Torquemada was later responsible for expelling the Jews from Spain, a policy which had dire consequences upon the country’s economy.

xxxxxAs we shall see, apart from Spain, the Inquisition was introduced into Italy (established in 1542) as well as in Portugal, France, and the Holy Roman Empire, and was particularly active during the Reformation, the Protestant movement that swept across northern Europe during the latter part of the sixteenth century. The Inquisition was not suppressed in Spain and Portugal until the early part of the nineteenth century. The great Spanish painter Francisco de Goya was summoned before it in 1815 when his painting The Naked Maja was judged to be both obscene and immoral. The last victim was a schoolmaster in 1826. Accused of Deism, he was garrotted and then put in a barrel painted with flames. In July 1834 (W4) Spain’s new Queen Regent signed the edict which ended it all: “It is declared that the Tribunal of the Inquisition is definitely suppressed”. The Inquisition or Holy Office continued to deal with ecclesiastical discipline, but was renamed Sacred Congregation for the Doctrine of the Faith in 1965.

xxxxxAs we have seen, a church court was established in 1231 (H3) to combat the Albigensians, an heretical movement in southern France. If the accused did not confess his or her sins then a suitable punishment would be meted out, often death by burning. Torture to extract confessions was authorised in 1252 and in 1478 the Spanish rulers Ferdinand and Isabella set up their own independent Inquisition. Aimed at first against Muslims and Jews who had become Christians but still practised their old faith, it was later used against the Protestants. Trials were held in secret, torture was often used, and punishments ranged from fines to death at the stake. Sentences were carried out in an elaborate public ceremony known as an auto-da-fé (act of faith). The Inquisition was later operated in Portugal, France, Italy, the Holy Roman Empire and the New World, and was not officially decreed at an end until the early part of the 19th century. The Spanish Inquisition was officially ended in 1834 (W4).