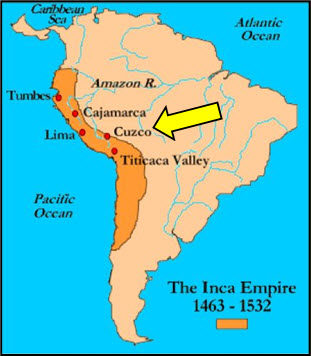 xxxxxLittle if anything is known of the beginnings of the Inca Empire which, by the late fifteenth century, covered vast areas of South America and could claim to be the largest native empire on the American continent. Legendxhas it that the founder of the Inca royal dynasty, Manco Cápac, (himself of doubtful authenticity) established the empire's ancient capital of Cuzco (arrowed) around the year 1100, when the Inca people moved into the area from Lake Titacaca. Certainly at this time there were a number of small warring kingdoms in what is today an area of southern Peru, and it might well be that the Incas were then emerging as the dominant force in the region. As we shall see (1200 JO), within a hundred years the Incas were dominating the Cuzco valley and preparing to advance much further. 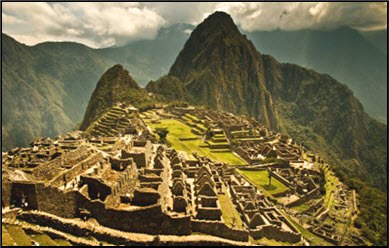 xxxxxCuzco, situated in a broad valley of the Andes at a height of over 11,000 feet, is the native word for "navel", so named because the city came to be regarded as the centre of the Inca world, the hub from which the empire's impressive network of roads was developed. Later, too, the city became noted for buildings such as the fortress of Sacsayhuaman, one mile north of Coricancha, and the Temple of the Sun, built in enormous stone blocks, so accurately cut that they needed no mortar in their construction.

xxxxxAccording to legend, Manco Cápac founded the capital of Cuzco around 1100, so called because it was the "navel" or centre of the Empire - the hub of an impressive network of roads and a city of huge buildings made of enormous stone blocks. Within a hundred years, as we shall see (1200 JO), the Incas dominated the Cuzco valley, the beginnings of a vast empire in South America.